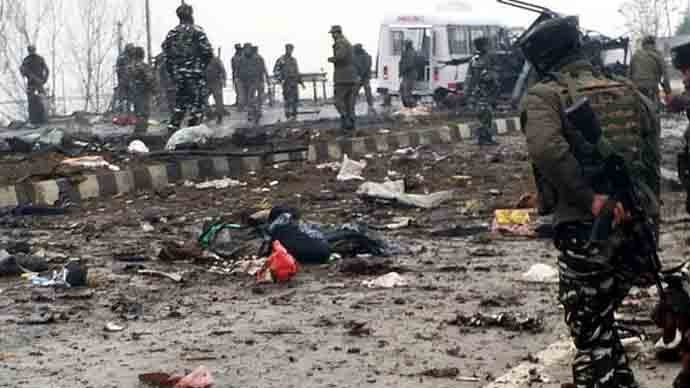 40 brave-hearts have been mercilessly butchered in Pulwama of Kashmir on Feb. 14, 2019. It is only a latest addition to the serial genocide of Hindus that started centuries ago and nobody knows how many more shall be added at what frequency, how long shall it continue in future and when all Hindus will open their eyes, burnish their Gandiva Dhanusha and become warriors to protect their home and hearth.

Though Prime Minister has already ordered severe response to those perpetrating the bloodbath but is that going to resolve the issue for a long time to come if not forever? Obviously, difficult to say yes.

Is that really possible? Unfortunately no, we are still not capable of becoming Israel for a long time to come. We have to trudge and traverse a very long journey on a road infested with sharp-edged pebbles and landmines too. We have umpteen reasons, hurdles and bottlenecks not to become Israel in proximate future.

Israel do not have a JNU / Jamia Millia Islamia / AMU / Osmania University… but we do have these prized possessions. Nobody can dare shouting ‘Israel, tere tukde honge’ in that country and remain alive by next morning. In our country, ‘Tukde-Tukde Gang’ is still thriving because Delhi Police was not allowed to enter into JNU Hostels and shoot them dead at midnight. How can Bharata become Israel so soon?

When Israel conducted Operation Munich, nobody in that country demanded ‘Sabuta’. But here in our Patita-Pavana Bharata, almost every so-called Opposition leader demanded ‘Sabuta’ from Government / Army of the surgical strike conducted in Pakistan and one of them dubbed it ‘Furgical’ Strike !! Those traitors were not dragged out of their homes at mid-night and given a severe thrashing by our soldiers, too soft and genial for their own countrymen. How can Bharata become Israel so soon?

Courts do not open at mid-night to conduct hearings for mass-murderers / terrorists in Israel. Their Supreme Court does not validate ‘dance-bars’ or decide height of ‘Dahi-Handi’. But here, our Supreme Court does and that too, shamelessly without even a tinge of embarrassment. How can Bharata become Israel so soon?

Israel do not have media of prestitutes. But we have media infested with not only prestitutes but also spies and traitors of all varieties ! They address mass-murderers as ‘militants’ and fight for their human rights. And our security forces are not allowed to neutralise or fake-encounter them as quickly as possible. How can Bharata become Israel so soon?

In Israel, no Maratha / Jat / Gurjara can / will burn public property for selfish motives but in Bharata, they do that without even a hiccup. And our security forces are not mandated to shoot them at sight, those marauders and lumpen elements. How can Bharata become Israel so soon?

In Israel, no one can dare calling their Army Chief ‘Goonda’, ‘Dog’ or ‘Rapist’. In Bharata, you find scores of such so-called responsible persons hurling invectives on security forces and going scot-free in one piece intact. And Government does not order security forces to grab them by the scruff of their collars, drag them to Vijaya Chowk and award thousand slaps on both cheeks before they collapse and beg for life. How can Bharata become Israel so soon?

Movie-actors in Israel do not raise the bogey of ‘intolerance’. They are proud of all what they have achieved, never return State awards. But in Bharata, a notorious gang of Khans suffer from unbearable intolerance after minting crores of fortune from the industry. And NIA is not permitted to arrest them, incarcerate them in Arthur Road Jail and beat the hell out of them in one night. How can Bharata become Israel so soon?

Israel have politicians who do not abuse their country in the name of political criticism. But here we have politicians like Randeep Surjewala / Kapil Sibal / Manish Tiwari who are gloating at the carnage as they have been gifted an opportunity to ridicule Modi Government for their terror-free track record of five years which BJP leaders have bragging about !! How can Bharata become Israel so soon ?

In Israel, they do not join hands with anti-nationals to realise personal agendas. However in Bharata, for loan-waiver, unemployment allowance, casteism etc., people enter into unholy alliances with forces determined to destroy the nation. How can Bharata become Israel so soon ?

Leaders in Israel do not herald dismembering the country, do not stand in support of students shouting anti-nationalism nor general public support such leaders in lieu of monetary inducements. Can you imagine an Israeli leader going to Iran soliciting support to overthrow their regime ? But Mani Shankar Aiyer precisely did that in Pakistan and he was not arrested under NSA or gifted hundred lashes on his back in public. How can Bharata become Israel so soon ?

Israelis would gladly suffer when it comes to a national cause. But here in Bharata, people threw away AB Vajpayee Government with brilliant performance just on the basis of onion, petrol prices !! That only goaded me to author a widely read article ‘WE, THE EDUCATED IDIOTS OF INDIA !!’. Those addicted to beer and butter-chicken cannot bear with rising tomato prices. How can Bharata become Israel so soon?

So Israel is Israel not because of their arms or some sophisticated technology. They are Israel because of impeccable nationalism of their citizens. It is people who make a nation. What Bharata is today is solely because of her natives. If we are not firmly resolved and committed to our nation, not one but even hundred Modis shall not be able to transform the country.

Unless Modi of today is assured, entire nation is behind him, he shall not be able to take tough decisions in the interest of nation. More than surgical strike in Pakistan, internal surgical strikes of lethal and extensive dimensions are urgently required in the country and entire nation must stand solidly behind him when he embarks on such a huge task. Hindus have very conveniently forgotten all the oppressions that the nation and our ancestors had to undergo during centuries bygone perpetrated by Mughal and Christian invaders beginning with Mohammed Bin Qasim to Ajmal Kasab to Pulwama genocide. Hindus must understand and believe, Islamic and Christian countries are hell-bent to destroy Hinduism and capture the nation. One has the grand objective of realising Islamic Republic Of India and so many of them say that vociferously. Similarly, others are intensely dedicated to the cause of realising Christian Republic Of India !! Abrahamic DNA is such that those forces can never, never be well-wishers of Hindus and Hindus must never trust any of them when it comes to security and existence of the nation. Sooner Hindus assimilate this harsh reality, the better for their own survival and well-being.

Pakistan is a country that was raised on the foundation of hatred and hatred for Hindus alone. And hidden beneath was the British desire never to allow Hindus to unite again and become a formidable force that we had been till 17th century. Anti-Hindu / anti-national system of education was imposed upon us by TB McCaulay and his acolytes with the sole intention to raise an army of brown / dark-brown traitors. And they succeeded to a great extent as we behold today. Pakistan is country infested with Jinnah’s murderous DNA and they never ever deserved any peace initiative at all. We as a nation, must keep Pakistan under our heavy boots perpetually. Pakistan is a menace to the international polity and the only lasting solution is complete destruction of Pakistan. So long as anything exists in the name of Pakistan, we cannot rest in peace at all. It is not that I relish to be a war-monger. Realities of the day are too harsh to be easily believed. If we do not flatten them today never to rise again, they will do that to us and by that moment of reckoning, it would be too late for us defend our existence.

We must move beyond Pakistan. It is their Islamic doctrine to slay ‘Kafirs’ and enact ‘Gazva-e-Hind’ to capture the nation that is at the root of the menace that is Pakistan. And the theological root-cause is generated in Islamic Madarsas led by Deobandis while terror-schools across the border provide manpower to enforce the theological root-cause. Lack of resolute and unshakeable unity among Hindus is yet another serious handicap. It is exceedingly agonising to behold, even centuries of multiple traumatic oppressions have failed to unite Hindus at least on issues of security and prosperity of Hindu community.

When a few great bodies like RSS / VHP undertake the most arduous task / have been busy struggling to inculcate a strong sense of Hindu unity for the first time in recorded history, it is Hindus who are in the forefront to condemn such organisations. In spite of centuries of sanguinary persecution of Hindus, Hindus are ever eager to speak in favour of non-Hindus while they shy away whenever they are called upon to condemn terrorism. Hindus are all congenitally suffering from ‘Kalidasa Syndrome’, so called after Mahakavi Kalidasa who was discovered chopping the very branch of a gigantic tree he was himself perched on !! That really goaded me to author the widely read article ‘WE HINDU-S ARE THE WORST SELF-ENEMIES !!’. In addition to ‘Kalidasa Syndrome’, Hindus also chronically suffer from ‘Arjuna Syndrome’ i.e. their resolve / determination trembles when it is the right moment of reckoning to strike at the roots of enemies of Hinduism !! If we Hindus do not tame our ‘Kalidasa-Gene’ and ‘Arjuna-Gene’, strongly unite for Hindu causes, earnestly pursue the doctrine of Canakya-Niti instead of abject cowardice of Gandhian Ahimsa, ‘Jauhar’ of Hinduism shall continue unabated. 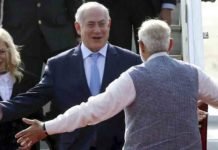 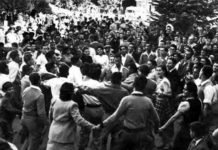 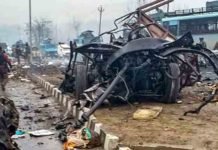