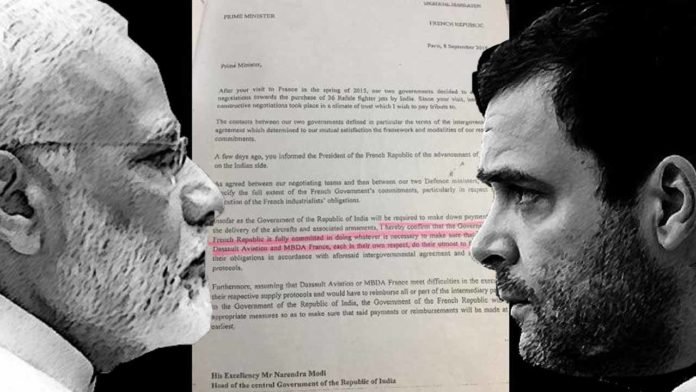 For all those who are interested in going into details on the latest controversy of the leaked letter and the noting sheet.
I am producing the copy of the letter with point wise analysis.

One, The letter was written by the French , PM himself, so is it not necessary for Indian PM to respond to this letter after personally checking and monitoring if things are moving in the right direction as been decided in the INTER GOVERNMENTAL AGREEMENT.

Two, The French PM talks of the Inter Governmental agreement and the terms and conditions, mutually agreed upon, and the commitments of the two Govts. This indicates that there was no agreement with the Manufacturer and so there was no agent of the Company involved in deciding the modalities.

Three, The French PM writes that the negotiating teams appointed by the two Govts have met and agreed upon the modalities, terms and conditions and also the two Def Ministers have agreed to the modalities and obligations of the two Govts .. This clearly shows that Parrikar was in picture, he agreed to the deal as decided by the NEGOTIATING TEAM appointed by both the sides.

Now this is common sense that the Indian PM would have also replied back to the French PM after having cross checked the details, from his Minister and Staff.

Hence, to bloody say that the India PM was interfering in the affair then I would say that ; DID THEY WANT OR EXPECTING THAT Mr MODI ALSO SHOULD HAVE BEHAVED LIKE MAN MOHAN SINGH.

In this whole episode I feel Rahul Gandhi who is a shameless creature, Mr Ram has also by publishing a fudged document has not done any good to his already tarnished Reputation.

The COPY of the letter written by the then French Prime Minister Manuel Valls on September 8, 2016 is attached.