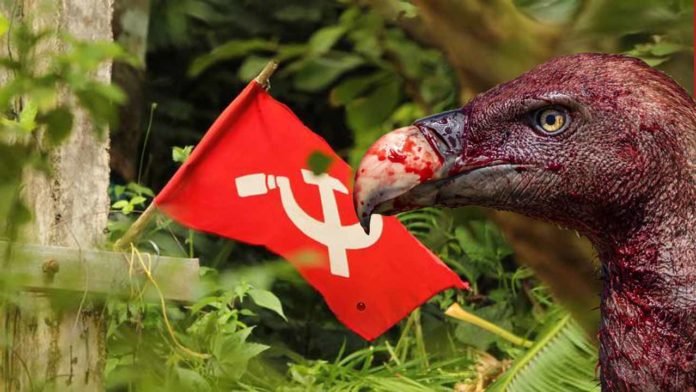 After centuries of monarchical repression perpetrated by the Tsarist regime of Russia, came into being a so-called revolution of Communism with ‘proletariat’ as their ‘feed-stock’ spewing the doctrine of ‘power through the barrel of a gun’, often dished out as socialism to hoodwink wise ones who had a nasty tendency to ask mood-spoiling questions.

From a repressive regime marked by widespread discontent, pendulum of the mood of masses swung to the other extreme of complete State control and ownership of all national assets coupled with decimation of individual strive and civil liberties in the name of socialism. And quite naturally so.

Led by VI Lenin in 1917, it was channelized by a bunch of ‘day-dreamers’ aspiring to command the entire world who were professional revolutionaries without a cause. When Marx / Lenin duo discovered to their utter dismay, vision of ‘proletariat’ was merely a vision, they started mulling over some other form of ‘socio-political treachery’ to achieve their sinister goals of atrophying the world through socialism of Vulture-Marxism.

Liberation from Tsars was a subterfuge as real aims lay somewhere else. In May 1919 at Dusseldorf in Germany, Allied Forces fortuitously received a copy of Communist Rules For Revolution. Those ‘sacrosanct’ rules are as under –

Corrupt the young, get them away from religion, get them interested in sex. Make them superficial, destroy their ruggedness.

Get people’s minds off their Government by focusing their attention on athletics, sexy books, plays and other trivialities.

Divide people into hostile groups by constantly harping on controversial matters of no importance.

Destroy people’s faith in their natural leaders by holding the latter up to contempt, ridicule and obloquy.

Always preach true democracy but seize power as fast and as ruthlessly as possible.

By specious arguments, cause breakdown of old moral virtues, honesty, sobriety, confidence, faith in the pledged world and ruggedness.

Cause registration of all firearms on some pretext with a view to confiscate them and leaving entire population helpless.

Masses repressed for centuries, discontented for decades, were immediately attracted to the ‘liberating idea of equity’ under the parasol of communism, participated or tolerated decades of blood-bath / mass-murders by Marxist-Communist bigots in the name of Naxalism / Maoism prodded by the rainbow of social equity in the form of ‘rivers of honey and milk’ flowing across their bylanes of miseries. However, the promised prosperity never came about because it was a merely a mirage that was dished out and served as a dream. Innocent, severely repressed masses could not have visualised or believed on being explained, that the dream was an impossible dream, rather something worse than a mirage.

Sprouting shoots of disbelief if at all, were brutally crushed under heavy metallic boots of Marxism / Leninism. In due course, the sham of revolution turned so brutal that it began being known as the ideology of ‘Murder-ology’. Icons of this anti-humanity ideology spread across continents with Mao Tse Tung in China, Joseph Stalin in the erstwhile USSR, Pol Pot in Cambodia, Josip Broz Tito in Yugoslavia etc. etc. No bubble of lies and damned lies can survive for long given the supreme strength of ‘Satyameva Jayate’.

Marxist-Communism started collapsing in countries after countries leaving countries like China more capitalistic than ever with an avowed assertion of being essentially a Communist nation only to dodge acute embarrassment caused by Communism that miserably failed them !! What to speak of perpetually flowing ‘rivers of honey and milk’ as a mark of burgeoning prosperity, Marxist-Communism miserably failed to provide even a semblance, not even a sham of prosperity anywhere in the world. After initial waves of genocide in the name of ‘foundation laying’, ‘purification’, or even ‘cultural revolution’, veil of ‘mysticism of Marxism’ was lifted and the world was shocked, stunned and horrified to behold them pathetic, wretched paupers languishing in penury for so long. So called super power USSR was discovered to be in tatters after the iron curtain was lifted by President Gorbecheva in the name of ‘Glasnost’ and ‘Perestroika’.

Instead of ‘rivers of honey and milk’, world was horrified to count hills of human skulls in countries like Cambodia, USSR etc. Marxist-Communism turned out to be the most brutal, cruel and anti-humanity ‘socio-economic ideology’ ever known to humanity. They burned down a beautiful State of Bengal to ashes in an uninterrupted rule spanning 36 years yet not a single word of penitence have they uttered ever. Rather, they have been superciliously brazen enough to abuse RSS for all the ills afflicting the nation !! So Communism may be summarised in just one word ‘Daridri by policy’ i.e. abject penury and wretchedness by way of a planned strategy.

That is how ‘Proletariat’ miserably failed Marxism and Marxist bigots lost all their hopes pinned on them. To their utter chagrin, frustration and dismay, they discovered, proletariat were not intellectually refined enough to assimilate Marxism into their DNA and die for the absence of a genuine cause ! Since pangs of despotism are difficult to obliterate, Marxist bigots very deftly started searching for a reliable alternative to proletariat who could deliver to them ‘dream of mastering entire world’, may be entire cosmos !! Failure of the proletariat to meet their expectations wrought a paradigm shift in their approach. By now they were convinced, only a ‘dictatorship in disguise’ can enable them to attain their goals through an ‘intellectual-prolatariat’ to extirpate roots of cultural heritage.

So the Vulture-Marxism of plunder and murder was quietly buried somewhere and came out Culture-Marxism from magician’s hat of Antonio Gramsci (1891-1937) and the Frankfurt School. Often recognised as Neo-Marxism (yet another term to smartly hoodwink gullible guys), Culture-Marxism had worthy and worthless intellectuals as their feed-stock spewing the doctrine of ‘social power flows through democratic rights engineered by Leftist-intellectuals and Eminent-historians’ preferably seated in sinecure institutional positions !! Once cultural heritage is annihilated, roots mutilated beyond recognition, vacuum thus created allows ‘organ-transplantation’ with Culture-Marxism to pretend revival and renaissance of a so-called ‘moribund’ society / country.

Entire sinister strategy has been crafted so skilfully that a newly born ‘apprentice’ Culture-Marxist would not believe, he / she is merely a continuation of erstwhile so-called Russian revolution / Vulture-Marxism in a new ‘Avatara’ !! To be more precise, Culture-Marxism is merely an old wine in a newly designed meticulously engraved crystal-glass bottle to attract well educated idiots / intellectual fools and transform them into ‘Neanderthals’ of treachery and bigotry. Marxists hate accurate history albeit love and admire fake history. They hate accurate history because they venomously hate Truth. They hate Truth because otherwise they are unable to indoctrinate minds with their sinister ‘Idiot-ology’. Truth is such an anathema to them that they pursue multi-pronged strategy to deal with history so as to negate it effectively.

Departments of Humanities in majority of Bharatiya universities have become INDOCTRINATION TERROR-CAMPS wherein young minds are venomously poisoned with anti-nationalism, anti-Hinduism, separatist / isolationist mind-set by faculty members who do not even deserve to be there as faculty members. So-called research papers / books that they publish in the name of scholarly pursuits, are nothing but street pamphlets full of anti-national venom disseminating divisive doctrines. Otherwise, their next preferred pastime is pitting one against the other so as to ensure, no one has time to point fingers at them and to bring about all round destruction of the institution.

Culture-Marxists are very well bonded to one another, all speak in one voice in an enviable synergy and coherence, rush to the rescue of anyone undergoing rigours of laws and mobilise resources like a magic, be that US Dollar or IMF bullion !! When Dr. Vinayak Sen was arrested by Chhattisgarh Police, 40 Nobel Laureates from all over the world had petitioned concerned authorities to release him as he was incarcerated wrongfully !! And a large international contingent of legal eagles flew down to Supreme Court in New Delhi to witness his bail proceedings, to ensure fair trial and eventual bail !!

Later he was appointed for a sinecure position with the then Planning Commission !! Such is the influence of Culture-Marxists. Be that media, bureaucracy, various institutions, NGOs…they exist everywhere and enact the role of potent trouble-maker and eventual destroyer of whatever they are able to catch hold of. They proffer ceaseless demands of State largess for the’poor’, ‘persecuted’, ‘oppressed’, ‘victims of social injustice’ to leave behind the State bankrupt, then abuse / blame Theory of Capitalism / ‘communalism’ of RSS, sectarian politics of BJP and what not. They dominate every debate on every available forum to reduce number of independent views on any issue of social / political / economic significance to bare minimum while harping loudly on the ideal of freedom of expression. Same tactic they ardently pursue in every discipline of education and creativity. I have myself witnessed D. Raja of CPI bullying college youngsters to agree to his view-point on a popular TV channel. When it comes to practising hypocrisy, Culture-Marxists are extra-ordinarily peerless. Culture-Marxist Comrade Sitaram Yechury refused to visit Yad Vashem in Jerusalem when he was in Israel as he did not wish to “legitimise Israeli propaganda about Holocaust” by visiting Yad Vashem but had no qualms while visiting Al Aqsa and Dome Of The Rock !! Culture-Marxists are ever adamant, no new / different idea be tried out anywhere other than the one prescribed by their Polit-bureau bosses. In 1962 Bharata-China war, Marxists had supported China because they believe in the doctrine of establishing a ‘Qaum’ of Marxists all over the world. Countries that rejected Marxism of any variety, are akin to ‘Darul-Harab’ for them. If religion is ‘opium’ for the masses, Karl Marxism is a ‘Cyanide tablet’ for the same masses.

Every revolution devours it’s own children, is widely believed and shared. It shall never fructify with Marxism of any variety because neither is it a revolution nor a cause. It failed with ‘bourgeoisie’ proletariat and will it fail abjectly with ‘bourgeoisie’ intellectuals too. Both shall continue to exist concurrently albeit Marxism shall certainly be fossilised one day. Every western doctrine / theology eventually had a limited shelf-life. Colonisation could not survive more than 200 years, Capitalism could not move beyond 100 years, Vulture-Marxism not more than 60 years…Culture-Marxism shall not survive even 10 years !!!