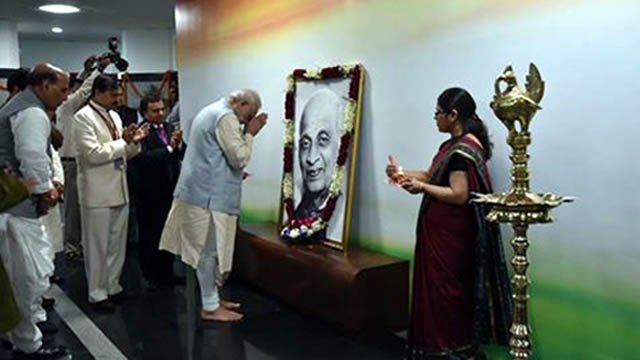 It was unfortunate and quite an uncultured conduct on his part. I am here, an obscure man with limited intellect, to remember one the greatest sons of Bharatavarsa and adore him for successfully accomplishing a task amidst every conceivable hostility which NO ONE had ever tried before in known / recorded history of this nation. Undoubtedly by range, extent, depth and intensity of the task, Sardara Patel matched Maharsi Chanakya and several other great Rsi-s and visionaries of ancient times.

By stabbing in the back of this nation, JL Nehru entered into Transfer of Power Agreement with the outgoing British Viceroy without informing any of his Congress associates, became adamant to grab Prime Ministership come what may, sidelining Sardara Patel who was favoured by 15 out of 16 State Congress Chiefs for the position.

While Nehru was playing like an errant school-boy with destiny of the nation and 40 crore natives, hobnobbing with Edwina Mountbatten, Sardara Patel got down to the business of unifying the nation with all his seriousness and capabilities like a true nationalist.

Sardara Patel was unfortunately, encircled by a host of unfavourable hurdles with no support coming from any quarter. The task amounted to unifying some 33 lakh square kilometres of area populated by 40 crore people, divided into 560 princely states of all sizes to reckon with.

Those outgoing British-Thugs had deviously announced that every state was at liberty to chose their destiny in whichever way they so desired. On western side of the border, there was MA Jinnah exerting his best to entice as many princes as possible on their terms. Inside the country, Mountbatten was not supportive while JL Nehru as PM, was plainly rude and hostile.

MK Gandhi further accentuated the hurdles by insisting on non-violence and Sardara Patel had a tough task of dodging Gandhi on several occasions. Indian Army was manned by British Commanders who were reluctant to clash with Pakistan. General Roy Bucher even discouraged Sardara Patel until the last minute on police action against Nizam of Hyderabad in November 1948.

British advisers and political agents of princely states headed by Muslims were blatantly and brazenly working against the country. Those British-Thugs were so hostile and venomous that the India Independence Act passed by British Parliament in July 1947 provided for a PRINCESTAN as the third dominion which led many a princes to believe that they enjoyed unrestrained option of joining either Pakistan, India or remaining independent. It was only after Sardara Patel tactfully accepted the British idea to join Commonwealth Club, did Mountbatten allow him to deal with princely states sternly.

Celebrity traitor that JL Nehru was, he insisted on dealing with Kashmir himself probably because he regarded himself a Kashmiri and found himself emotionally very close to Sheikh Abdullah. By the time JL Nehru died an ignominious death, Kashmir became a festering wound to contend with for all the successive governments till date. Worst challenge that Sardara Patel encountered was in Hyderabad as the Nizam was a prisoner of Pakistani agents called Razakars. Also, British adviser of Nizam Alexander Monckton was brazenly pro-Pakistan and in sheer desperation, Nizam sent an SOS to British Govt. to send a British Prime Minister for Hyderabad !! As if it was enough, JL Nehru used to pressurise him not to take any action against the Nizam or Razakars. Sardara Patel had to wait till Sept. 1948 to take advantage of JL Nehru’s absence in New Delhi before he ordered Army to act.

Nawab Hamidullah of Bhopal was acting day and night as an active emissary for luring wavering princes to join Pakistan or create third dominion called Princestan in the capacity of Chancellor, Chamber of Princes. Indore, Baroda and Jodhpur were important links of this grand design. Divan of Travancore CP Ramaswami Aiyer was yet another thorn in flesh. On May 9, 1947 he declared his State to be independent and was actively supported by Jinnah. Divan was so assertive that the Maharajah could not muster courage to disagree. It was only after Sardara Patel telephoned him, assured all support that the Maharajah could silence his Divan.

Under the leadership of Jamsaheb who had succeeded Bhopal as the Chancellor, it was decided that Kathiawar states shall remain independent. Shah Nawaz Bhutto, Divan of Junagarh and a friend of Jinnah game planned to accede to Pakistan. It was formally announced also on Aug. 15. At an opportune moment in Nov. 1947, Sardara Patel moved troops into Junagarh by keeping Mountbatten completely in dark and annexed the State swiftly.

In Jodhpur, he encountered a tricky situation. Maharaja of Jodhpur was newly crowned, young and immature while the state bordered Sindh. Jinnah did several tempting offers including a blank signed warrant of accession for terms of accession to be authored by the Maharaja. Sardar Patel intervened directly and annexed Jodhpur for Bharata without losing time.

In all, it was a mammoth operation accomplished marvellously in a span of some one year or so.
Entire operation was conducted so skillfully, so tactfully that it became a legend incomparable to say the least. Can anyone of us today, even dream of such nationalistic acts being performed by the so-called leadership ???

His personal life too, right since his childhood, had been a tale of deprivation, steel-determination and extra-ordinary achievements, majority of them unbelievable for the ongoing generation. He lived and worked like a Rsi incarnated with the Mission Impossible which he deftly transformed into a legend to be remembered into eternity.

Sardar Patel is a Legend Incomparable. Now in 2018, 68 years after his demise, unique legend of Sardar Patel is being resurrected by Prime Minister Narendra Modi with a Statue Of Unity, loftiest in the world, being dedicated unto him on banks of river Narmada as a humble mark of gratitude to the great man. May he be born in this country as many times as possible.