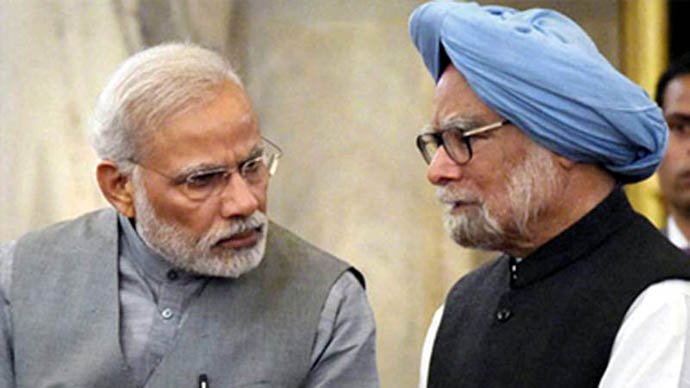 May 26, 2014 Narendra Modi is sworn in as Prime Minister and MM Singh bows out of office, mercifully indeed !! After 10 year wasteful ‘sabbatical’, MMS bows out of PM office BLACKENED WITH DARKEST DEEDS. Nation is ashamed of him.

Well friends, I am being accused of being too harsh with PM ManMohan Singh. Really so? What about the 10 year long serial plunder and destruction of the country, compromising national interests in agreements like Bharata-US Civil Nuclear Deal, what about enormous inflation, what about enormous unemployment, what about frequent terror attacks from Pakistan, what about Chinese incursions, what about crores of Bangladeshi infiltrators… are these minor issues?

The Educated Idiots of India must know that in any other country, this PM would have been thrown out lock, stock and barrel long back and derogated all around.

Worst are voters of Raebareli, Amethi and Phulpur, Lok Sabha constituencies of Indira Gandhi, Rajiva / Rahul Gandhi and JL Nehru in that order. Have these places become Singapore, Hong Kong, Taiwan / Tokyo??? Certainly not. Then why voters of these constituencies went on voting them to power again and again all these years?

Then the climax is 36 years of despotism perpetrated by Jyoti Basu / CPM in Bengal. CPM / Jyoti Basu were on a burning spree of Bengal for four decades at a stretch and The Educated Idiots Of India residing in Bengal have all the complaints against BJP / RSS!!

Then they opted for a lesser evil in Mamata Bannerjee to ‘enjoy’ complete run over by Muslims granted by herself. Rabindranath Tagore and his entire family were entirely pro-British till Jallianwala Bagh genocide and he even composed a poetic tribute to King George V which now happens to be our national anthem and We, The Educated idiots Of India have no problems with that at all.

Similarly for fifteen years Bihar was on flames under ‘Jungle-Raj’ of Lallu Yadava and his wife, Rabri Devi. From President to Prime Minister to Union Home Minister to Bihar Governor to DG Police of Bihar did not stem destruction of Bihar because they all happened to be the Educated Idiots Of India !! And Bihar too, opted for a lesser evil in JD(U) rule while abusing and cursing BJP / RSS !!

Because we, The Educated idiots of India have been suffering from the highly contagious, malignant cancer of THOUGHTLESSNESS / MINDLESSNESS / BRAINLESSNESS and now it has assumed epidemic dimensions. We, The Educated Idiots of India demand BJP to be THE PERFECT / FLAWLESS POLITICAL PARTY BUT NOT CONGRESS !! What a political wisdom we have attained so far !!

After suffering at hands of Congress for so many years, after abusing BJP for so long without extending them sufficient number of years in power to work and display remarkable achievements, we The Educated Idiots of India are now swirling towards a ‘Sadak-Chhap’ Party i.e. AAP, full of Naxalites / Maoists / stooges of overseas anti-Bharata forces…so merrily !! And large number of The Educated Idiots of India are asking brazenly, “Why should we vote for Narendra Modi at all ?” !!! Why are we ever fascinated by dubious personalities so easily ? Why were we swept away by the ‘Garibi Hatao’ in 1971 ? Why did we defeat NDA in 2004 just on the basis of some flimsy slogans of the Congress (I)TALIAN ? Why is that even a minor glitch of BJP offends The Educated Idiots of India so much while they turn Nelson’s eye towards Congress (I)TALIAN and their unabated spree of loot and destruction of the country ?

Rank of We, The Educated Idiots of India is swelling with Educated Idiots like Meera Sanyal, ex-MD of ABN AMRO Bank, Balakrishnan of Infosys and Gopinath, a failed flyer whose airline could never take off due to tyre-burst on runway as he attempted to take off from the landing point!!

Every serving and retired bureaucrat, retired serviceman constantly abuses every Government in power in spite of drawing all benefits and allowances. Such an intensely pessimistic negative attitude, so widely dispersed, could not be eradicated even by numerous training programs they usually undertake throughout their career. Their deep-rooted hostile attitude realistically reflect upon state of affairs of the nation all these decades post-1947.

We, The Educated Idiots Of India never think for a moment, why after all we are constantly abusing / cursing our own nation. Eminent jurist Nani A. Palkhiwala had once commented wryly, “Only if man had been a little bit more intelligent or a little bit more stupid, world would have been a wonderful place to dwell in.” While attending a NaMo Rally-2013 at Rohini in Delhi, several police officers came to us, pressed upon us that we must see to it that NaMo becomes next Prime Minister otherwise “we shall not be able to protect you from Tughlakshahi…” in their own words.

We, The Educated Idiots of India must immediately become The Enlightened Ones of India to save the nation and vote right Party that has a vision for the nation, right leadership that can sacrifice all their interests for the sake of nation. Nation has been passing through dire straits, of existential issues after 1947. If even once we act irresponsibly in polling booths, then ONLY Isvara can save this country from being decimated. There is no other way to save this country now.