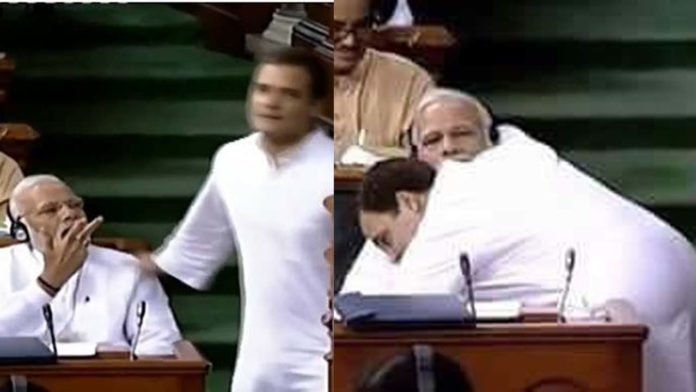 On July 20 of 2018, Congress President and fourth generation dynast of Nehru-Gandhi-Vadra dynasty Rahul Gandhi walked down to Prime Minister Narendra Modi on the floor of Lok Sabha, greeted him without any rational basis, commanded him to stand-up after delivering his cacophonic speech without any substance during tense debate on No-Confidence Motion.

When the world-statesman appeared bewildered, Rahul Gandhi forcibly hugged him in a churlish, puerile manner. Within moments Prime Minister regained his composure, called him back and reciprocated his greetings and good wishes while remaining seated, calm and serene. Congress President was back on his seat thereafter and winked at his Lok Sabha mate only to ward off any possible embarrassment arising out of his buffoonery telecast live worldwide before electronic channels.

His stated objective was to win over ‘hate-filled’ PM Modi through his so-called ‘love’. The Rahul Hug, now surfaces that it was planned in Feb. 2018 while the wink was impromptu, spontaneous or instinctive. Whatever may be the case, The Rahul Hug has been squeezed to pulp by Media-Pundits, Rightists and a motley crowd of cynics. It was so puerile, so silly resembling a two year old child nagging his father to be picked up in his arms that even hard-core boot-lickers of the Oldest Party found themselves extremely uncomfortable to defend The Historic Hug leave alone going ga ga over it !!

Mercifully or otherwise, Rahul Gandhi was not cheekier enough to plant a kiss on one of his bearded cheeks, a tough proposition indeed. We are not sure whether the world leader would have offered his second cheek for another kiss in a true Gandhian spirit of Ahimsa however, any such scenario would have raised hackles and a huge controversy across the country if not the whole world indeed. The unwelcome insolent intruder into treasury benches was bombarded with a flurry of eye-missiles by the ferocious Defence Minister yet The Hug Man stood his ground valiantly. Historic Rahul Hug failed on both counts, resuscitation of Rahul Gandhi’s political career and of course, Congress lost the kiss of life !! Thus, the nation warded off his political resuscitation and renaissance much to the relief of entire nation.

Other two hugs are equally historic too.

After conclusion of the fratricidal battle of Mahabharata, blind Kuru-King Dhrtarastra wished to hug Pandava-s ostensibly as a measure of penance in his palace though he nurtured extreme wrath on Bhima as he had brutally killed his eldest son Duryodhana.

It was Vasudeva Sri Krsna who sensed it precisely and turned out to be their saviour once again. He asked for the iron statue of Bhima close by to be pushed ahead for the Great Kuru-Hug which the blind Monarch crushed to pulp. Alive albeit shocked and dazed, Bhima touched feet of the eldest Kuru who now wept bitterly, turgid with remorse and penance with all his anger melted away. It was a historic Mahabharata-Hug indeed.

Last but not the least is The Sivaji Hug. When the Mughal giant Afzal Khan attempted to hug Chhatrapati Sivaji Maharaja in his sinister bid to kill him, the great martial warrior swiftly gored the beast to a terrible death with his Wagha-Nakha hidden up in his sleeves even before he could pull out his dagger. The Mughal beast had gone there to administer a bear hug upon Chhatrapati Sivaji and what he landed with was a tiger hug !! And lost his life in the hug. Those were the darkest and most unfortunate years of Mughal invasions when their only mission was to plunder the nation, destroy Hinduism and convert all Hindus to Islam at sword-point.

Not all hugs solemnised are well-intentioned. History had been kind to Bharata and all the time, evil despot who came to hug, had it blown on his face.

Let us now look forward to how The Rahul Hug culminates, how much and on whose face. 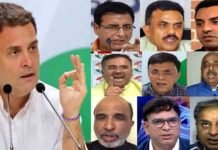 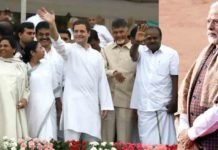