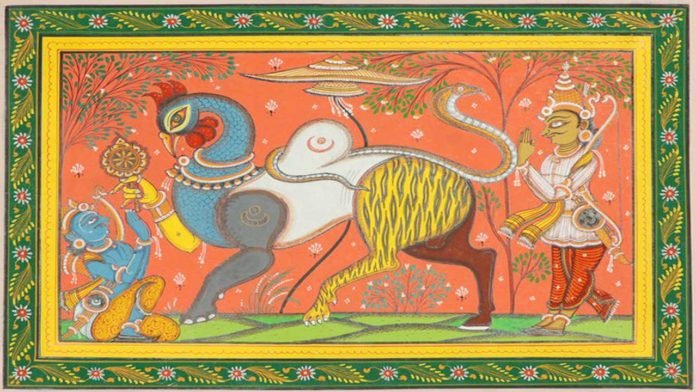 When Arjuna was wandering in jungles on hills of Manibhadra during fratricidal war of Mahabharata, he came across quite a strange animal that appeared to be an aggregate of different limbs of nine diverse animals.

That was Navagunjara 3 ft. in height with his head of a rooster, neck of a peacock, waist of a lion, hump of a bull resembling Siva-linga, serpent as tail, three legs from an elephant, tiger and an antelope with a human hand holding a lotus in bloom.

Dazed by the strange monster like appearance, Arjuna instinctively picked up his huge Gandiva to shoot an arrow in self-defence and suddenly retracted when he happened to glance at the blossoming lotus in hand.

As he contemplated in amazement observing the animal, Vasudeva Sri Krsna appeared before him and introduced the animal, Navagunjara as one of His own manifests similar to the Visvarupam described by Him in Chapter 11 of Srimadbhagvadgita.

Navagunjara symbolised multifaceted approach to perceive the Ultimate Reality as infinite-dimensional with no individual being capable of comprehending or perceiving all dimensions of the Absolute Truth. (S)He may be able to perceive just a few that may be far lesser than even a drop in the ocean.

Guided by the cardinal principle EKAM SAT, BAHUDHA VIPRA VADANTI, this multiplicity is never allowed to be aimlessly wayward but directed towards ultimate Unitarianism as the last port of call. Multiplicity may manifest in various celestial deities, sects, beliefs, communities, temples, festivals, rituals or rites. It may even be in various forms of Darsana-s ranging from blatantly atheistic to intensely theistic, from Dvaita to Advaita.

All these constitute those beautiful tiny fibres that weave the tapestry of Sanatana Dharma, eternal and vibrant, something to offer to everyone guided by his / her preferences and propensities. All these constituents derive strength and nourishment from the whole just as leaves and branches of a tree are dependent on the trunk, just as all spokes of a wheel converge at their centre.

Mysticism of Sanatana Hindu tradition is unique and extra-ordinarily exquisite. While it assumes and accepts Advaita i.e. unity and confluence of all varieties in Param Brahmatma, it concedes rationalities and diversities of entire existence in the doctrine of Dvaita. Advaita is the plenitude of Dvaita, it’s ultimate abode wherein entire Dvaita retires into Advaita by annihilating itself.

Dvaita rests on the foundation of Advaita while Advaita is entire entirety that is absolute, perfect and complete. According to the doctrine of Sanatana Dharma, any mode of Sadhana, Tapasya or worshipping any manifest of divinity is perfectly valid and acceptable albeit fruitful only and only when it is regarded as a means to the ultimate abode of Advaita. If means of Dvaita is assumed to be the ultimate destination, decrepitude sets in and in due course of cosmic travel through the world, horrifying consequences follow.

Sanatana Dharma have a lively tradition of Sastrartha i.e. marathon arguments till contestents arrive at a mutually acceptable conclusion. These Sastrartha-s generally turn very intensive spanning days and months. Famous Sastrartha between Adi Samkaracarya and Mandana Misra continued for three months uninterruptedly, then taken over by wife of Mandana Misra followed by undertaking of a mystical exercise of Para-Kaya Pravesa i.e. temporarily incarnating into body of someone else, to understand a knotty issue before resuming the Sastrartha. Such Sastrartha-s used to be conducted in arenas known as Kutuhalasala-s i.e. arenas of curiosity between erudite scholars having mastered their respective disciplines of study. Navagunjara may be regarded as symbol of unfathomable possibility of nature and it’s incomprehensible aspects. Creative manifestation of divinity and causing a sense of awe is infinite and unimaginable implying, not all divine manifests are explicable irrespective of one’s wisdom as with Arjuna who happened to be close to Vasudeva Sri Krisna. While Arjuna was amazed at his own incomprehensibility to explain existence of such a creature, his lifting Gandiva spontaneously is an instance of human frailties.

Navagunjara-s are popular in the state of Odisha and find mention in Odiya version of Mahabharata authored by Adikavi Sarala Das, endowed with the immense faculty of creativity including symbolism and metaphors. These are also painted in plenty by them on Patacitra-s, sculpted on northern side of Sri Jagannath Mandira in Puri. Nila-Cakra atop the shrine has eight Navagunjara-s engraved on outer circumference, all directed towards the flagpole on the peak. Navagunjara is the King card while Arjuna, as minister card in the sport of Ganjifa. Some scholars regard Navagunjara as the most enigmatic and mystifying creature in divine perceptions mentioned in scriptures.