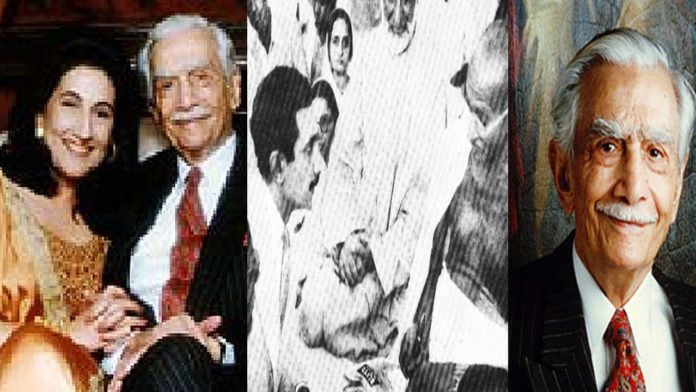 He was a Quetta born Mumbaikar while I happen to be a Bombay born and brought up Mumbaikar, his ‘Mantra’ was ‘Publish and Get Damned’ that inspired me to attain ‘Mantra’ of ‘Be Righteous Ever and Get Damned’ !!

He laid down foundation of almost entire discriminative political understanding that I possess today through his Blitz though I never met him personally. He was exceedingly righteous, so much so that he was a Terrorist-Journalist for a venomously oppressive, corrupt to the core, vindictive, autocratic and highly egoistic Prime Minister Indira Gandhi who did not blink even once in back-stabbing the nation by returning 90,000 captives of Pakistani Army for a song without demanding POK in lieu.

And the way Russi, embodiment of patriotism / nationalism, blasted her in several issues of Blitz thereafter, is probably one of the highest verticals in post-1947 history of Bharata. Even his rugged contemporary Nani Palkhiwala succumbed to her pressure tactics but Russi, no way. Voraciously I used to read every word of Blitz during my student life whichever issue I could grab after being introduced to the tabloid by my father, himself an ardent reader of Blitz.

Rustom Khurshedji Karanjia (1912 – 1 February, 2008), a journalist and editor, founder of a weekly tabloid Blitz with emphasis on forensic journalism, ran the tabloid for four decades since 1941 onward. He interviewed several high and mighty viz. Fidel Castro, Chou En Lai for Blitz, nurtured fledgling careers like RK Laxman and Abu Abraham, served as WW II correspondent in Burma, died 95 in 2008, opted for Hindu custom of being cremated instead of going into Tower of Silence.

Beginning with Communism, he turned into an ardent pro-Hindu vehement supporter of Ayodhya Movement that raised his stature by several notches. Blitz used to be so ferocious that their Sub-Editor AV Narayan was murdered by a bunch of criminal politicians in 1983. Russi authored several books on various topics too.

“You don’t have to be crazy to work here, but it helps.” So was announced his presence outside his Office in Blitz. Political Who’s Who who nefariously indulged with public money and trust, used to shudder at names of Blitz and Karanjia. He always loved to be warned, threatened and persecuted by the high and mighty in corridors of authority. Murder threats were most welcome. He advised one death-caller not to come on Sundays and holidays to kill him ! His ‘Love to Hate’ relationship with Indira Gandhi was truly remarkable as she was his resolute tormentor for years. CIA hated him as a Soviet stooge and when mistaken as Indian Ambassador to Cuba by Castro, he cared little to set the records straight ! Blitz notched lakhs of readers and Russi received highest number of ‘Letters to the Editor’ than any other newspaper in the country, treated all his staff members as his extended family, tolerated even their temperamental outbursts.

When Parsis migrated from Persia after being persecuted by Muslim invaders, they were allowed to settle by the local King Jadi Rana of Sanjan in Gujarat, on the condition that they would adopt local ethos in entirety. Thereupon, Parsis assured him to merge themselves into society like sugar in milk !! History is witness, Parsis exceeded the brief far beyond ‘sugar in milk’ to merge like ‘honey in milk with Kesar’ !! This is the only minority community in true sense of the word, never provoked any other community by any means, never demanded any favour from the State yet contributed immensely to the nation. Not only Parsis are truly secular, they never provoked majority Hindu community to conduct themselves in a communal fashion. They never compelled Hindus to become communal, very unlike Muslims who thrive on most narrow-minded / murderous communalism of the lowest order. Hindu-Parsi communal tension is an ‘entity’ that never existed even in anybody’s dreams !! And Hindu-Parsi relationship is a perfect example of Secular Co-existence of the finest order. Muslims and Christians must emulate Parsis as their role-model minority community and Hindu-Parsi communal harmony completely devoid of any friction like conversion / love-jehad etc.

Russi Karanjia was one such pillar of nationalism, integrity and genuine ‘secularism’, one among so many Parsis, adorable with so many accolades on his head.