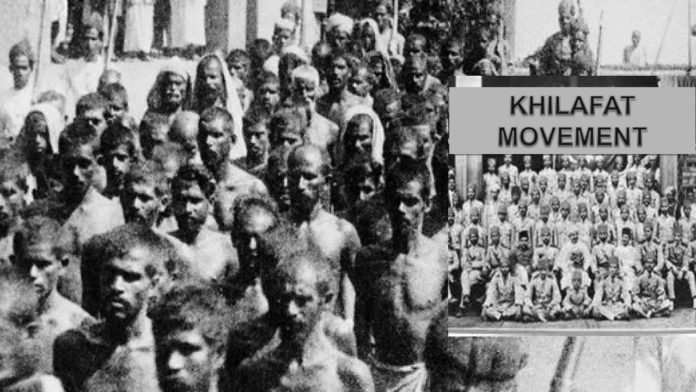 Khilafat Mandal headed by Ram Narayan Nambudri was organising a conclave to be addressed by Maulana Allah Baksh from Panjab, on his ‘pious and secular’ visit to Kerala. Calicut Muslims persuaded Khilafat Mandala Chief RN Nambudri to order Hindu youths to pull the Buggy of Maulana instead of horses in the procession leading to the conclave venue to convey a ‘beautiful’ message of Hindu-Muslim unity across the country.

Nambudri was immensely pleased at the suggestion and complied with it. Maulana seated himself in the Buggy like a Mughal Sultan, Hindu youths yoked to the Buggy dragged it so proudly, Muslims exclaimed frequently, “Subhaan Allah, Subhaan Allah” and ” Allah-O-Akbar”, Hindu-s showered petals on Maulana on the way, Muslims looked at one another so gleefully and Hindu-s did a joy-ride for the Maulana all around streets and roads of Calicut in the name of communal harmony.

While Hindu-s and Muslims were singing songs of Hindu-Muslim unity, one ‘stupid’ Hindu Nair suddenly started shouting ‘Vande Matarama’ whereupon Muslims were extremely annoyed, pulled him out of the procession immediately to become untraceable later, ordered all Hindu-s to shout only ‘Allah-O-Akbar’, resumed the procession only after Hindu-s apologised to the Maulana umpteen times. Then the procession arrived at the residence of Mahanandi Iyer where the meeting was scheduled to be held.

While the conclave was being conducted by Maulana Allah Baksh, Mahanandi Iyer proposed to discuss ‘Swaraja Andolana’ too after ‘Khilafat Taharir’ as that too, was on it’s full stream and equally important. One Mulla Etkhan lost his cool and shouted on Iyer that he wished to impose Hindu-s on Muslims through the ‘conspiracy’ of ‘Swaraja’ while MK Gandhi had pressed for complete success of ‘Khilafat Taharir’ at any cost !!

Crest-fallen Mahanandi Iyer immediately apologised to the ‘venerable’ Maulana and assured his unmitigated co-operation. Now Maulana Allah Baksh read out the riot act, if Hindu-s were true Hindu-s(as doubts perpetually existed), supported MK Gandhi’s ‘clarion call’ by heart and wished complete success of ‘Khilafat Taharir’, they must donate funds and other resources as Mopla Muslims of Kerala were extremely poor. Hindu-s attending the conclave lustily cheered the Maulana on his appeal and clapped heavily in endorsement.

Mahanandi Iyer again got up to profusely apologise before Muslims with folded hands and begged for pardon. On the same day, Rs.10,000 (huge amount in 1920) were collected by Hindu-s of Calicut and delivered to the Maulana before sun set. Maulana praised Mahanandi Iyer, called him a ‘true’ Hindu and a ‘Maha-Purusa’ at that, of a high order !!

Few days later nation learned, all Hindu-s of Mopla with Mahanandi Iyer being the first one, were brutally slaughtered, all Hindu women gang-raped, their breasts severed before their husbands / sons, tortured and killed, their houses / properties plundered, thousands of Hindu-s in Calicut were forced at sword-point to confess Islam…… thus established was pious Hindu-Muslim Unity as visualised by MK Gandhi through that ‘Khilafat Taharir’.

Is it that Mahanandi Iyer was not aware of the recent past of blood-bath perpetrated by Mohammed Bin Qasim, beheading of King Dahira of Sindh, daughters of King Dahira being crushed alive in his Harem by one Ibn Yusuf of Iraq, thousands of Hindu women savagely brutalised by him, children being pierced by his soldiers before their parents; or 17 invasions on Somnatha Mandira by Mahmud Gazanavi, Sivalinga mutilated into pieces by his ‘messengers of peace’, thousands of Hindu-s beheaded and their heads thrown in fields, Peshavar / Multan / Lahora burnt to ashes with thousands of Kafirs screaming to death; or Khwaja Moinuddin Chishti of Ajmer and his ‘Chela’ Mohammed Gori who brutalised Prithviraja Chauhana, stripped his Rani naked before all after being defeated umpteen times by the brave Rajaputa, then hanged his severed head at the entrance of his castle, caused rivers of blood flowing; or Bakhtiar Khilji of 13th century, Nalanda / Vikramasila razed to ashes, all teachers / students / women / children burnt to death alive; or brutalities committed by Allauddin Khilji, Rani Padmavati committing Jauhara accompanied by thousands of women to escape Islamic brutalities, thousands of Rajputa warriors slaughtered defending their Kingdom; or the genocide of Hindu-s wrought by Taimur, raising hills of skulls of some 2 crore Hindu-s butchered; or brutalities of Babar in 16th century, ‘Slaughter Hindu’ competitions, children screaming from his Harem, destruction of Sri Rama Mandira in Ayodhya; or the mass slaughter of 30,000 innocent women / children / old men by Akbar ‘The Great’ with his own hands in Chittoragarha, thousands of women committing Jauhara, his Harem full of 5000 screaming women and children; or Guru Arjuna Deva being forced to sit on red-hot iron plate by Akbar’s son Jahangir followed by pouring of extremely hot sand over Guru’s body, then excoriating flesh from his body with tweezers; or lakhs of Hindu-s slaughtered by Aurangzeb for refusing to confess Islam, who razed thousands of Mandira-s, brutal killing of Guru Tega Bahadura, Bhai Mati Das being cleaved alive into two halves, Bhai Sati Das being burnt alive wrapped in cotton-sheaths, holding procession of 700 severed heads of Sikha-s beheaded, Chhatrapati Sambhaji Maharaja tortured for 20 days and his eyes being gouged out with sword for refusing to accept Islam, his tongue / skin / nails pulled out for refusing to say ‘Allah-O-Akbar; or two sons of Guru Govinda Singha being immured to death in a wall; or Mahanandi Iyer ignored the fact that thousands of Hindu-s were captured, castrated and sold as slaves in west Asia by all Mughals…and in spite of such a sordid history of brutal persecution, Mahanandi Iyer conducted himself in the manner described before that aptly symbolises plight of Hindu-s then and now.

No, it is impossible to believe that he was not aware of those dastardly acts of Muslims, least of all obliterated from his memory. Why did those Hindu-s participate in those activities even if MK Gandhi wished that after centuries old brutal, sanguinary history ? Why did a Hindu accept leadership of ‘Khilafat Mandala’ at all, that too devoid of liberty to manage funds ? Why no one protested angrily when Hindu youths were yoked to drag the Maulana in streets of Moplah ? Why didn’t all Hindu-s unite there and then to cleave the Maulana into loaves of flesh with his blood flowing on streets ? Is it that Hindu-s had turned pacifists after undergoing severe brutalities perpetrated by British-occupiers once they were recalled / invited by 60 Hindu Kings with assurance of unqualified support after they were decisively defeated and thrown out in 1857 ? Not at all, root-cause lay somewhere else.

Concept of ‘Hindu-unity’ never ever occurred to anyone in ancient Bharata. I have not yet come across even a single tangential reference to the concept of ‘Hindu-unity’ anywhere in Sanatana scriptures and I believe, it does not exist anywhere. Our ancestors, generations after generations, were so much intoxicated high on Sanatana values that it never occurred to them that non-Hindu communities might ever be a source of existential crisis for them. They were absolutely unaware of any issue that even remotely resembled Hindu vs. non-Hindu !!

Quite paradoxically, there was nothing unusual about that as law of nature goes, wicked felons and diabolical ones unite fast and quick to realise their nefarious goals while pious, sagacious ones do not find uniting necessary / desirable at all. First thought of defending against oppression / onslaughts perpetrated by non-Hindu must have come only after they were fiercely ravaged by Mohammed Bin Qasim, first invader in recorded history who brutalised Hindu-s. In absence of ‘Hindu-unity’, several Hindu Kings / monarchs colluded with Mughal Sultans to teach another Hindu King a ‘lesson of his life’ owing to sheer ego-clashes of flimsy grounds !!

On the contrary, never ever a Mughal / Muslim Sultan colluded with a Hindu King to teach another Mughal / Muslim Sultan a ‘lesson of his life’. Quite unfortunately this propensity exists even today albeit in a modified manifest. No Muslim ever raises his voice for a Hindu cause while scores of Hindu-s jump to yell and howl for Islamic / Muslim causes !! It is very shocking and nerve-rattling to behold that erudite Sanatana leaders in medieval Bharata too, did not warn Hindu-s about potential hazards to their well-being and security emanating from non-Hindu communities or invasions from across the ocean though they were celebrated visionaries, not to speak of the era of ancient Bharata !!

They left all innocent / defenceless / gullible Hindu-s entirely at the mercy of Param Brahma while preaching them volubly, “Isvara helps those who help themselves” !! Sense of ‘Hindu-unity’ was implanted in Hindu mind for the first time in entire available Hindu history, by Dr. KB Hegdewar by founding RSS with the sole mission to address the existence-threatening issue that besieged Hindu-s for so long.

Hindu-pacifism too, is a proceed of complete absence of Hindu-unity. Seeds of Sanatana-pacifism were sown in the royal court of intellectually and physically blind King Dhrtarastra itself and maximum share of responsibility for that heinous act of omission goes to Bhisma Pitamaha though Dronacarya / Krpacarya / Karna etc. too, were equally responsible.

Draupadi was disrobed in the royal court and Bhisma Pitamaha astonishingly discovered himself ‘helpless’ !! And ‘fragile’ too !! And he is still regarded and adored as a grand-warrior !! If a grand-warrior and an exceedingly erudite scholar of the class of Bhisma Pitamaha was rendered helpless and fragile when his great grand daughter-in-law was disrobed and derogated before him in royal court, how can we blame or mis-understand Mahanandi Iyer and others, centuries after centuries ??

Vasudeva Sri Krsna was perfectly righteous when He declared, such a family / clan / society that derogates their women, must be completely extirpated. If crores of our ancestors were brutalised and exterminated, we must intensely introspect what subtle factors and causes might have been there in their homes for such calamities and catastrophes to fall upon them in the form of foreign invasions.

Just like complete absence of the sense of ‘Hindu-unity’, sense of ‘country-hood’ too, had been absolutely non-existent in Hindu minds. Hindu nation always existed, weaved and sewed with the powerful thread of Sanatana Adhyatma but the concept of ‘country-hood’ never. Mere nation-hood was not enough for security and prosperity of Hindu-s and a politically / territorially well organised country was an absolute imperative as boundaries of ‘country-hood’ used to drawn and re-drawn too often, so much so that the cardinal concept itself disappeared into oblivion and hardly anyone was conscious of it.

Practical concept of ‘country-hood’ was visualised by many but concrete contours were imparted to that only by first Home Minister Sardar Vallabhbhai Patel post-1947. Barring lesser deviations like POK and Akshai Chin largely invited by an irresponsible / anti-Hindu Prime Minister, politically well-organised ‘country-hood’ of Bharata gifted by Sardar Patel turned out to be resolute and unshakeable. From this point of history onward, possibility of expanding ‘country-hood’ shall ever remain alive while it’s contraction shall continue to be an impossibility.

Deficiencey of ‘Hindu-unity’ was eradicated on the auspicious festival of Vijayadasami-1925 while deficiency of ‘country-hood’ on I Day-1947. Hindu-s have been able to address these two serious deficiencies after centuries of sacrifices and oppression, at a very huge price as detailed above. Those monumental sacrifices render it absolutely necessary that we move on towards consolidation and beyond. Benjamin Netanyahu, Prime Minister of Israel who visited us in Jan. 2018 for 6 days, too cautioned / warned us never to ignore our past of terrible Hindu-holocaust and we must remain strongest possible unitedly so as to live and die peacefully in our country / nation / homes in centuries to come. If at any point of our existence in future, any reverse whatsoever, is cast upon us pertaining to both issues, it would be an unpardonable sin and darkest chapter in the history of Hindu-s ever.