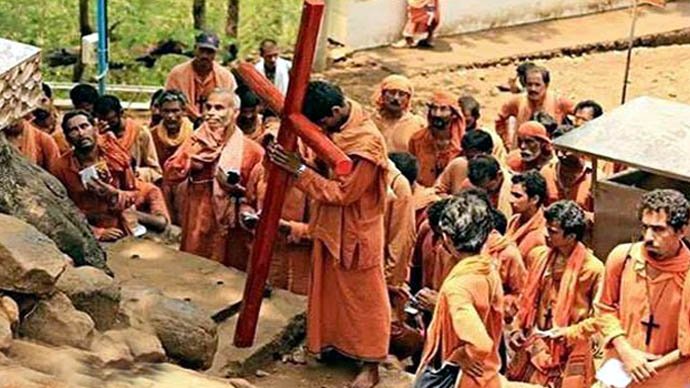 This is the right season, one year before national elections, for all missionaries designated as Archbishops / Bishops / Cardinals in the country to be infected by the ‘Nipaha virus of fear and danger’ for Indian Constitution and the only way to keep it safe and sound is ‘Defeat BJP’ !!

Archbishop Couto’s missive is certainly not the first one to boot in this (un)holy exercise to manipulate / influence political opinion in favour of Vatican ideology. Earlier Archbishop of Gujarat had done that prior to Gujarat Assembly elections, Archbishop of Hyderabad Tumma Bala, Vicar General of Archdiocese of Hyderabad Swarna Bernard, Chief of Independent Churches Wilson Singam and Head of Churches of South India AC Solomon Raj too, had indulged themselves in these dubious activities. 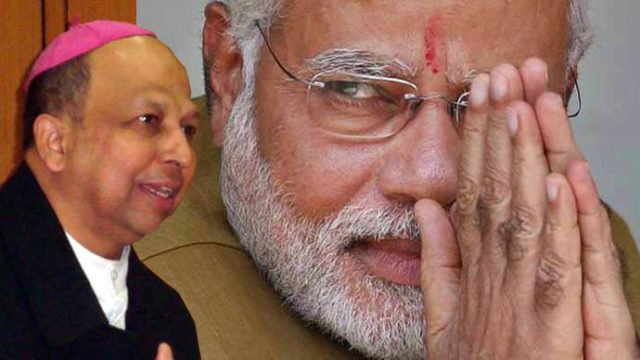 All these Church ‘Pandaas’ are appointed / dismissed by Vatican alone, they accept orders ONLY from the Pope (Global Chief Pandaa) to blatantly peddle morbid Christianity. One of them recently declared audaciously, Constitutional Clauses are not applicable / acceptable to them. If Constitution itself is not acceptable to these stooges of Vatican, then why are they crying wolf about some imaginary Constitutional-Holocaust ??

This Missionary specific ‘Nipaha virus of fear and danger’ has been directed by Vatican to move out of their hidden cells and crevices to infect their pre-destined targets with pre-determined symptoms and pre-conceived notions. ‘Defeat BJP / Defeat Modi’ is an integral component of their larger than life designs to prevent Hindu-nationalists from portals of power and self-governance exactly as they dislodged non-Christians from power in entire African continent one by one by destroying all aboriginal faiths, then Fiji and now Mauritius is on top their hit-list. Nepal is already high on their radar as they have been very active in that Himalayana country.

Vatican cannot tolerate non-Christian Government in any country in the world as they presume and believe, it is their responsibility ‘to civilise’ the ‘uncivilised’ world by evangelising them as evangelisation is the only civility in the world left now !!

Noted author Gerald Posner in his celebrated book GOD’S BANKERS has explained in detail, no Government unacceptable to Vatican can stay in power for a moment. Their designs were evident in Bharata when ‘Mother’ Teresa, a pathetic looking Catholic nun planted by them in Kolkata, hawked Christianity among destitutes through her notorious Missionaries Of Charity.

Entire Christian establishment in the country went on strike. PM Desai working smoothly till then, suddenly encountered a howl of protest across the country as well as change in leadership. Even a so-called ardent nationalist George Fernandes stood up against his Government in the name of ‘dual membership’. 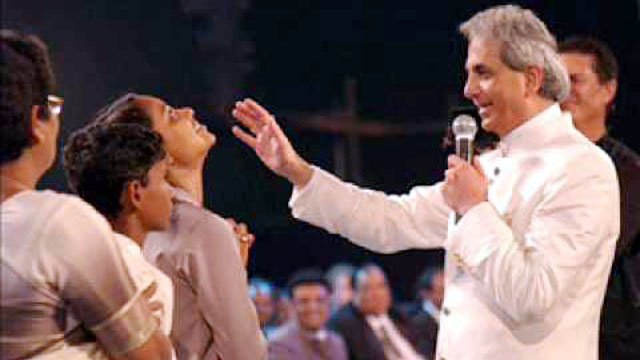 Similarly, Muslims are striving hard to go for Islamic Republic Of India and the country, in all likelihood, going to be a battleground of fierce war between these two despotic faiths with consequences unimaginably horrifying.

Coming back to the main issue, it is quite a mystery as to how they believe some personality known as Jesus ever existed and commanded them to capture, plunder and evangelise the whole world and whosoever came in the way as hurdle or boulder, must be slaughtered immediately. And they claim, such a diabolical conduct is perfectly in harmony with tenets of Bible !! How are they different from Islam or for that matter, any other despotic faith in the world ?

Nehru-Gandhi-Vadra Dynasty ruled over the country for six decades under the dispensation of Congress raised during British occupation by a Britisher to hoodwink and deflect war of freedom. After power was transferred in 1947, they fell under the supervision of Vatican. Nation underwent multiple crises of all sorts including Emergency-1975 but this breed of Missionaries designated variously never raised their voice to the effect that democracy / Constitution were jeopardised just because they enjoyed and accomplished their sinister agenda of proselytization almost unhindered.

Only when NDA-I headed by AB Vajpayee was installed, there were murmurs of protest and now under NDA-II headed by Narendra Modi, trickle of such statements / grievances has become a torrent.

When NGOs were restrained / shut down to stop conversions and other destructive activities, they started raising hue and cry for democracy and Constitution-Holocaust. Interestingly, entire Christian world is absolutely unable to interfere on any issue in Muslim countries and China.

Even Pope does not have guts to dictate his terms on Islamic countries as well as China where immediate slaying is punishment of choice. However, in Bharata of Hindu-s, they have lot of ‘Commandments’ to tell us to obey just to avoid going to hell as all Hindu-s are born sinners !! They do not have guts in their groins to tell Chinese / Muslims, they all are born sinners.

Prime Minister Modi, greatest statesman in the world today, has dedicated his entire existence unto the service of poor and deprived, completely neglected hitherto, to raise their quality of life as rapidly as possible. Results have been spectacular as large chunk of poor have been joining ranks of educated middle class and substantial chunk of middle class moving into highly successful, prosperous upper classes of society.

Since the population segment of uneducated poor is fast disappearing, it is all the more difficult for Jehadis / Missionaries to go about with their destructive designs of plunder, rapes and conversions. It is poverty and illiteracy that are root-causes of their vulnerability to those obnoxious elements determined to destroy fundamental identity of the nation.

Effectiveness and runaway success of social welfare programs unleashed by Modi Government has rattled nerves of Jehadis / Missionaries to no limits and now they are in a deadly mood of ‘Do or die’ for victory in Lok Sabha-2019 elections.

The Darkening Age by Catherine Nixey, published by Houghton Mifflin Harcourt, narratively exposes sanguine, highly destructive history of Christianity in past. They have been masters of anti-intellectualism and exceedingly prejudiced iconoclasts. They had also mastered the art of destroying artwork, desecrating religious joints, burning thousands of books that questioned their doctrine… they were the ones who invented acid-attacks!!

As public opinion gradually turned against them, they adopted the doctrine of ‘Love Thy Neighbour’ to camouflage all those sinister activities of acquisition through corruption and proselytisation. Papacy of Vatican very much anticipated safe and sound delivery of the ancient nation of Bharata like another Constantinople by Sonia Gandhi and her son by the end of UPA-II !!

Entirely unexpected (to them !!) electoral victory of Narendra Modi led BJP in Lok Sabha-2014 foiled their Rainbow-Dreams and they crashed to Ground Zero or may be, far below that. To achieve their despicable goals, they all are not only joining hands together, impossible hitherto, but also invoking all sorts of ‘dirty tricks’ from ‘Award-Wapasi’ to JNU unrest, to somehow grab power and wreak havoc in the country.

Nation has suffered for centuries owing to foreign invasions and all sorts of brutal crimes, unimaginable and inconceivable, nothing short of Hindu-Holocaust has been perpetrated on our ancestors.

Oppressors from abroad always and inevitably had to encounter fierce resistance yet they succeeded in a limited way solely due to treachery and back-stabbing by some Hindu-s in cahoots with invading despots. Behind every defeat of a Hindu King, behind every victory of an invading tormentor, there is reprehensible tale of treachery, betrayal and perfidy by another Hindu. Without that, it would have been simply impossible for any Hindu Monarch to be defeated by any foreign invader.

Most tragic aspect associated with our history has been treachery of the worst order by Hindu-s against their own Kings and Kingdoms. It shall not be a hyperbole if Hindu-s are declared WORST SELF-ENEMIES in the world. It is very frustrating to observe, even today, country is infested with anti-nationals / traitors who would go to any extent to support anti-nationals while damaging the nation.

Recently, all political parties in Opposition, all of them loaded with corruption charges in various courts across the nation, joined hands to win by-elections and defeat BJP. They won only because Hindu vote-bank still does not exist. Hindu-s still do not appear to have grasped power of their votes, trap of NOTA to nullify their vote base and what sort of calamities Hindu-s would undergo for five years to begin with, if Hindu-s are not determined to ensure, Muslim / Christian votes do not install a rabidly anti-Hindu Government at the Centre. 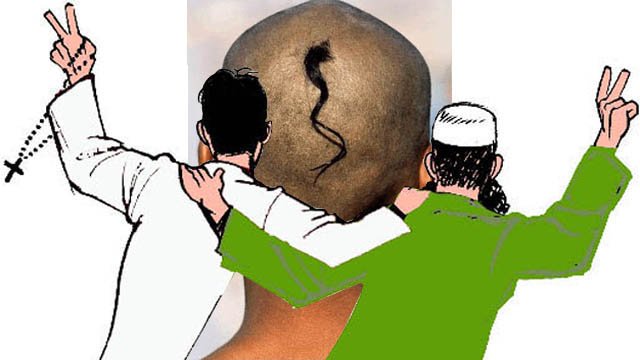 If Muslims of all sects and varieties can instantly unite for any Islamic cause in spite of internecine acrimony, if Christians of all affiliations can unite for any Joshua cause and Constitution-Holocaust spontaneously, why can’t Hindu-s of all political / ideological affiliations readily and blindly unite for every Hindu cause?? If this historic milestone is not achieved immediately and invoked on trial by fire in Lok Sabha – 2019 elections, Hindu-s may well lose their homeland of Bharata forever.

Only if Hindu-s unite for all Hindu causes, no power on earth may dare treating Hindu-s and Hindu causes casually. This proposition is an absolute necessity and if not undertaken with utmost seriousness immediately, Hindu-s may well encounter existential crisis sooner than later.