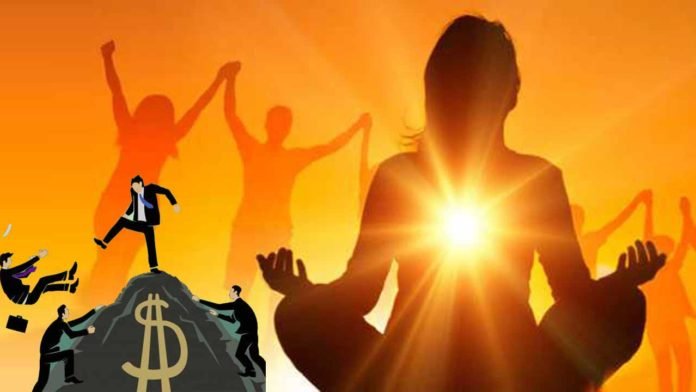 Theory of capitalism is all about capital formation as a measure of unhindered private initiative. Given all niceties of human disposition, phenomenon of individual initiatives for wealth creation gradually transforms itself into a mad race to become rich in surplus and disposable resource of wealth. And that is root-cause of capitalism being humbled and humiliated in recent decades of economic journey of some so-called advanced economies.

In several cases, there have been spill-over effects on societies / families in terms of inter-personal / social / family values too. Doctrine of capitalism has wrought sinister influence on one’s life-style, spending habits, moral values etc. because that does not constitute fulcrum of the doctrine.

Fulcrum of the philosophy of capitalism remains wealth accumulation by all conceivable means. Not only it trashes co-opetition, it disregards fair competition too.

In quite a big way, capitalism promotes, nurtures and nourishes social inequality, social tension, friction and quite often, bloodbath. Theory of capitalism is actually theory of profligacy and extravagance by a few, unfairly fortunate ones. It is a theory of ‘Bhoga-Vilasa’ or in a crude language, theory of ‘Ayyaashi’.

One may well claim, entire capitalism may be summed up in just one word, “Ayyaashi” !! As it is impossible for everyone to be able to generate wealth to be anointed as ‘Hero of Capitalism’ barring a miniscule percentage of population, a fact that ‘erudites’ of capitalism very conveniently overlook lest their survival itself is jeopardised, very large segment of human population suffering from rigours of capitalism is consigned to extreme discontent, frustration and sense of resignation.

When these social aberrations accumulate over a prolonged period of time, some sort of revolution is born. And chances are high, either the revolution is utterly flawed in concept or drifts into a very wrong direction or into wrong hands in spite of being accurate conceptually.

Fair as well as unfair accumulation of wealth in hands of few can neither be righteous nor justifiable. Wealth belongs to all and equally even if it is generated through one’s individual efforts and strive just as everyone enjoys equal claim to all natural resources. Since it is not in consonance with fundamental human instinct of acquisition and accumulation, theory of capitalism falls apart into fragments and it’s shards pierce all sections of society.

Post WW II, Bretton Woods Agreement was signed by a select few countries, US $ was declared prime currency for international transactions, number of financial institutions raised to nurture western hegemony over so-called III World countries etc. etc. with the prime motive to peddle exploitative doctrine of capitalism in the form of economic colonialism. Few more decades down the line, capitalism that overawed the world hitherto, started crumbling down and stripped of it’s halo of sanctity. Protagonists of capitalism were profoundly embarrassed into suggesting thereafter, implementing ‘economic techniques’ like Globalisation / Liberalisation / Universal Basic Income / Special Economic Zones / Free Trade Pacts as well as regional trade alliances to fix frailties of the ideology. However, over a period of time, it is observed that the basic issue continues to exist without decrepitude, rather aggravates as member nations turn increasingly acquisitive and accumulative.
Theory of Capitalism is indeed, Theory of ‘Bhoga-Vilasa’ / ‘Ayyaashi’ / profligacy and extravagance.

And the revolution thus born, was flawed on both fronts. Not only was it conceptually preposterous but also terribly flawed in implementation in an absolutely wrong direction. After centuries of monarchical repression and atrocities, after decades of ‘convoluted’ capitalism, came into being a so-called revolution of Communism, sometimes known as socialism to hoodwink wise ones who have a nasty tendency to ask mood-spoiling questions. From individualised ownership of prosperity under Capitalism, pendulum of the mood of masses swung to the other extreme of complete State control and ownership of all national assets coupled with decimation of individual strive and civil liberties. And quite naturally so. Then followed ‘Cultural purification’ to create vacuum in all minds to be occupied eventually by Red Book of Marx / Lenin. Masses repressed for centuries, discontented for decades, were immediately attracted to the ‘liberating idea of equity’ under the parasol of communism, participated or tolerated decades of blood-bath / mass-murders by Communist bigots in the name of Naxalism / Maoism prodded by the rainbow of social equity in the form of ‘rivers of honey and milk’ flowing across their bylanes of miseries. However, the promised prosperity never came about because it was a merely a mirage that was dished out and served as a dream. Innocent, severely repressed masses could not have visualised or believed on being explained, that the dream was an impossible dream, rather something worse than a mirage. Sprouting shoots of disbelief if at all, were brutally crushed under heavy metallic boots of Marxism / Leninism. In due course, the sham of revolution turned so brutal that it began being known as the ideology of ‘Murder-ology’. Icons of this anti-humanity ideology spread across continents with Mao Tse Tung in China, Joseph Stalin in erstwhile USSR, Pol Pot in Cambodia, Josip Broz Tito in Yugoslavia etc. etc. No bubble of lies and damned lies can survive for long given the supreme strength of ‘Satyameva Jayate’. Communism started collapsing in countries after countries leaving countries like China more capitalistic than ever with an avowed assertion of being essentially a Communist nation only to dodge acute embarrassment caused by Communism that miserably failed them !! Shrinking empire of communism has by now shrunk so much that it survives only in tiny states of Tripura, Kerala and of course, JNU !! What to speak of perpetually flowing ‘rivers of honey and milk’ as a mark of burgeoning prosperity, Communism miserably failed to provide even a semblance, not even a sham of prosperity anywhere in the world. After initial waves of genocide in the name of ‘foundation laying’, ‘purification’, or even ‘cultural revolution’, veil of ‘mysticism of communism’ was lifted and the world was shocked, stunned and horrified to behold them pathetic, wretched paupers languishing in penury for so long. So-called super-power USSR was discovered to be in tatters after the iron curtain was lifted by President Gorbecheva in the name of ‘Glasnost’ and ‘Perestroika’. Instead of ‘rivers of honey and milk’, world was horrified to count hills of human skulls in countries like Cambodia, USSR etc. Communism turned out to be the most brutal, cruel and anti-humanity ‘socio-economic ideology’ ever known to humanity. So Communism may be summarised in just one word ‘Daridri’ i.e. acute penury.
Theory of Communism is indeed, Theory of ‘Daridri’ / ideology imposed penury and wretchedness.

Whenever a socio-economic-religious ideology is ‘imported’ from overseas, inevitably it boils down to anti-nationalism of non-biodegradable variety. That is precisely what happened with western Capitalism and Marxist Communism. Bharata always had her own unique ethos and no foreign ideology is capable of satisfying our ideological thirst or sort out our issues without causing attrition and friction. Nation’s fundamental identity is sacrosanct and inviolable while overseas ideologies are not universal. Moreover, no nation can ignore their history and Bharatiya culture is an integrated one visualising entire world as a Universal Human Family in the spirit of Vasudhaiva Kutumbakuma without compromising on fundamental identity and heritage. It also engenders newer concept of constituting an IDEOLOGY REGULATORY AUTHORITY OF BHARATA to continuously monitor influx of such deadly ideas being adopted and nurtured by gullible denizens.

Pt. Deendayal Upadhyaya was member of RSS, founder of Bharatiya Jana Sangha who formulated his socio-economic philosophy in the name of Ekatma Manavavada i.e. Integral Humanism. Draft of the philosophy was extensively debated in Jan. 1965 by Pritinidhi Sabha of Bharatiya Jana Sangha held in Vijayawada. He later expounded it vividly in a series of lectures delivered in Mumbai and Pune. Ekatma Manavavada is the philosophy whose time has come howsoever ludicrous may be the response of Congress and CPM. Government of the day is influenced by the doctrine to ensure, equal opportunities to excel, for all. Pt. Deendayala Upadhyaya was neither a Rightist nor was he a Leftist nor Centrist. He was an ardent EQUAL-IST advocating, all are equal and equal opportunity for all. As is said in scriptures –

i.e. may everyone be blissed, may everyone be healthy, immediately gives rise to the concept of Antyodaya, a socio-economic welfare programme to look after last member of the social hierarchy. Concept of Antyodaya has led to formulation of a plethora of schemes to uplift poorest of the poor which are now a matter of envy for the large army of capitalists and socialists across the world. Western capitalism allows unmitigated liberty to private enterprise, degenerating into ‘Survival of the Fittest’, excessive consumerism, profligacy and destruction. On the contrary, Marxism belongs to the other extreme of wisdom which advocates excessive state control over resources and initiatives leading to return of stone age civilisation. For both of them, human body is the end instead of being means to an end to be discovered later. Ekatma Manavavada alone is the socio-economic philosophy in the world that is dynamically ALL INCLUSIVE in true sense of the term. When nation’s economy had sunk to the rock-bottom level by the end of the term of UPA-II riddled with grievous corruption and plunder as a measure of composite legacy of two failed ideologies, one disciple of Ekatma Manavada was installed as Bharata’s Prime Minister in 2014 with a massive majority, crafted several socio-economic development programmes based on principles of Antyodaya / Ekanta Manavavada and transformed it into fastest growing economy in the world. All just in a span of three years and earned handsome plaudits from all over the world. What more authentication is required to establish primacy of the doctrine of Ekatma Manavavada ?? 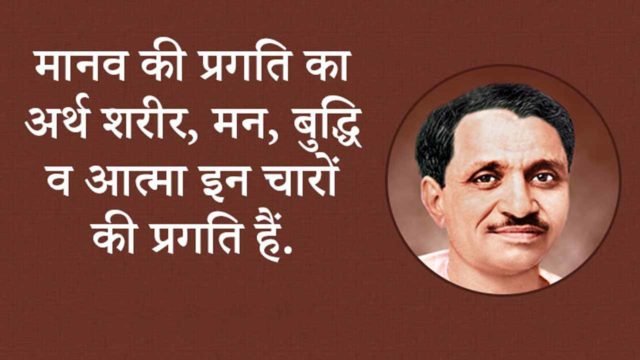 Doctrine of Ekatma Manavavada has never been against western science or state control where it is inevitable. Though these were at the peak of their respective glories during lifetime of Pt. Upadhyaya yet these failed to even scratch him on surface not to speak of being overwhelmed as had been the case with so many others. With great courage of conviction, he questioned them and proved their superficiality before the nation. He argued that values and verticals of Vedanta Darsana have always been modern and a state established on those never faded away into obsolescence. Always it rejuvenated and refurbished itself with changing times with augmented relevance while the core remained the same incessantly, “We shall have to end a number of traditions and set in reforms which are helpful in the development of values and of national unity in our society. We shall remove those traditions that obstruct this process.”

Thus, Ekatma Manavavada is the landmark philosophical doctrine which begins with “Aham Brahmasmi” i.e. “I am Brahma” and concludes with “Vayam Brahmasmaha” i.e. “We ALL are Brahma.”