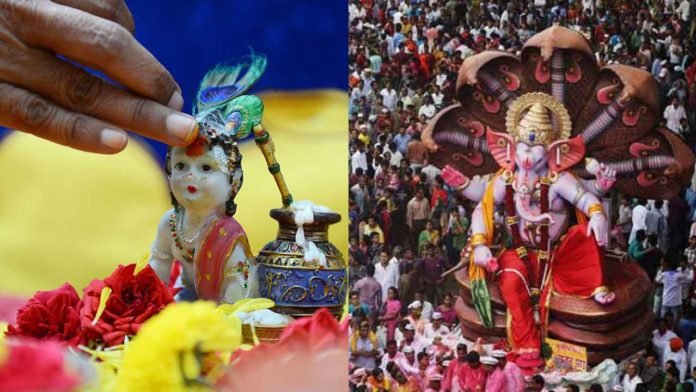 I am gradually drifting towards the view that those who oppose Murti-Puja among Hindu-s are in reality, Nastika-s i.e. atheists notwithstanding how much they adore Veda-s, recite Vedic Mantra-s and conduct Yajna-s.

I shall methodically elaborate my perception for all to examine and assess. I have already explained in one of my articles in recent past that Murti is not just an idol carved out of a dead object. Once an idol is consecrated through Prana-Pratistha, an elaborate procedure detailed in Sanatana scriptures, it is transformed into ‘Murti’ wherein presence of deity symbolised by the Murti is augmented and every such Murti is worshipped and treated as living deity.

Prana-Pratisthit Murti does symbolise the deity invoked therein through elaborate rituals, has been established beyond an iota of uncertainty through ages. Swami Ramakrisna Paramahamsa had Darsana of Ma Kali through the Murti of Ma Kali that he used to worship everyday as Pujari of the Kali-Mandira at Kolkata, is a well-known, well-established reality.

This mystical and Adhyatmika event has been underscored, highlighted and repeated scores of times all over. It is mentioned in memoirs of Tailanga Swami Maharaja of Varanasi by one of his ardent disciples that Ma Kali had appeared before them i.e. author in presence of Swami Maharaja, as a girl out of the small Murti of Her that he used to worship everyday, blessed them, reverted into the Murti and vanished.

Several such tales have been circulating around wherein a specific deity is purported to have appeared from a Murti, supported the person in distress and disappeared subsequently. Swami Vivekananda had consecrated a Murti of Ma Kali in a temple somewhere in Kolkata for one of his disciples. Hindu Kings always used worship and invoke their deities before proceeding to battle-field.

It is also interesting and mystical to note that Mughals had not been able to destroy even a single Sakti-Pitha anywhere in the country during their diabolical and brutal spree of despotism against Hindu-s and Hinduism despite their efforts, aggressive and persistent. Sanatana scriptures are full of tales of Murti-Puja by much adorable deities themselves.

Sri Rama is mentioned in Valmiki Ramayana to raise a Sivalinga at Ramesvarama, consecrate and worship Siva through His Murti of Sivalinga before embarking on the victory battle of Lanka. So also all Rsi-s, Maharsi-s and Siddha Yogi-s criss-crossing the country on various missions.

Adi Samkaracarya travelled all over the country, established and consecrated several Mutts and Dhama-s as centres of pilgrimage, learning and for renaissance of Sanatana Dharma. Entire content of Srimadbhagvadgita As Svadharmayoga Upanisad I received in a fraction of second in 2001 while having Darsana of Sri Radha Ramanji Maharaja in His ancient temple located at Vrindavana. Such mystical instances and events are far too frequent to be ignored or disbelieved.

If a Murti is consecrated and live, how can that be rejected in the name of Idol-worship as movements like Arya Samaja do? Well known contemporary icon of Arya Samaja Swami Ramdeva not only denounces Murti-Puja but also ridicules astrology, influence of planets on human beings etc.

He ridiculed even Bhagavana Kala Bhairava live of Astha Channel as being an alcoholic!! Is that Islamism or Christianity in garb of Astha or lack of it being pedalled by Arya Samaja? Does that not amount to rejection of our entire heritage in the name of social reform of opposition to Murti-Puja?

Ostensibly, ‘Murti-Puja’ or whatsoever in the name of it, does exist everywhere as a measure of religiosity whether wholeheartedly, reluctantly, illusionary or even deceptively but it does exist. It is so because it is intrinsic to human nature and persistent rejection only leads to a sham of it.

Murti-Puja has significant socio-politico-economic value too, associated with it. It leads to erection of temples, constitution of groups and societies, strengthening of social bonds, national integration etc. Not very long ago, week long Murti-Puja of Bhagavana Ganesaji Maharaja on Ganesa-Caturthi used to be centre of gravity of Swaraja Andolana and struggle for independence from British yoke heralded by a great visionary, Lokmanya Tilak. Swami Vivekananda received lessons on mission of his life at holy feet of a Prana-Pratisthit Murti of Ma Kali in a Kolkata temple before heralding resurgence of Sanatana pride all over.

Nirguna Brahma-Puja is not an easy affair and I would be intensely curious to know, how many great Souls in this country of some 85 Crore Hindu-s are advanced enough in Adhyatma to pursue that earnestly? Is the great Arya Samaja luminary Swami Ramdeva, an ardent opponent of Murti-Puja, capable of pursuing Nirguna Brahma-Puja? Is he a Param Siddha Yogi? None of it. As a prominent Hindu sect and ardent opponent of Murti-Puja, Arya Samaja failed to grow beyond a certain level and considerably harmed Hinduism by eroding and ravaging faith of masses in Sanatana beliefs, rituals, wisdom and heritage in the name of preposterous excessive rationalism.

By rejecting Murti-Puja as a superstition while not being capable of pursuing Nirguna Brahma-Puja, opponents of Murti-Puja inadvertently fall into the trap of atheism ultimately. Thus having rejected Saguna, incapable and unable to pursue Nirguna, opponents of Murti-Puja are degraded into being faithless creatures sooner than later. This state of faithlessness, uprooted from moorings, dangerous and detrimental, may compel them to remain precariously adrift, perilously close to disasters of secularism and communism before being eventually proselytised, then becoming proclaimed enemies of the nation.