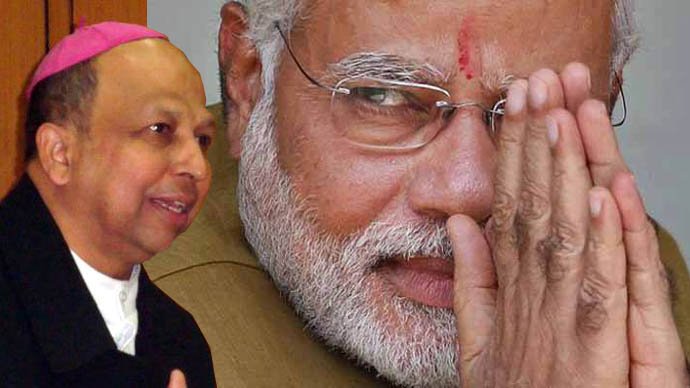 I hope, my e-missile reaches you in the best of your health and well-being.

Recently you issued a mass appeal to defeat BJP in Lok Sabha – 2019 elections as you have been feeling ‘unsafe’ and ‘insecure’. How did you really conclude, defeat of BJP shall ensure, you and Christians of your ilk shall be rendered safe and secured, if not already? Did you or Pope Francis receive 11th Commandment directly from the Heavens? I am quite baffled over your conduct and subsequent declamations to that effect.

Archbishop Couto, it appears that the imaginary Commandment dawned upon you because for the first time, almost 17,000 fraudulent NGOs have been unceremoniously shut down and foreign grants frozen. For the first time since 17th century, there has been a serious attempt, quite an effective one, to put an end to proselytisations by Gangs of Missionaries funded from abroad through the sham of social services.

For the first time, indoctrination to Naxalism / Maoism has been halted. Had you been a nationalist, you would have welcomed all these steps !! Swami Vivekananda was deadly correct when he declared, every conversion creates one more enemy of the nation loyal to the Vatican or Mecca / Medina. Let me tell you, conversion of faith irrespective of being forced or induced, is the worst crime against humanity and such communities meet their gory ends sooner than later, ultimately.

Hindu-s may or may not be born sinners but Missionaries like you have piled up heaps of sins upon themselves all these decades and centuries through conversions. Sanguinary faith conflicts gripping the world is certainly an indication of movement towards the final nemesis.

Coming to the point Christians are unsafe in a Hindu-Rastra, are Christians safe in Africa ? You destroyed all aboriginal faiths in Africa, grabbed their land and mines, handed them over Bibles to eat, drink, breathe, bathe, sleep and shit too !! Jesus did not like that and he sent Islamists to punish them all and now they are being butchered like they are in a wholesale market of butchery !! Did US President Trump or British Prime Minister carpet-bomb Africa to protect Christians under Islamic onslaughts ? Anyone would have been immensely pleased at these developments as a measure of schadenfreude yet I am not as I happen to be a Hindu !! Are you safe in Pakistan ? In other Islamic countries ? How can you overlook a reality so stark and conspicuous that Christians are safe ONLY in a Hindu-Rastra, nowhere else ? Now what is emerging is that Christians are not safe even in Christian countries and Europe happens to be a volcanic example to that effect.

Let us now visualise a scenario of your liking. BJP is defeated and combined Opposition of traitors, looters and street-louts win and a Satan like Owaisi becomes Prime Minister of the country. Will you be safe under that dispensation and assumption that US $$ shall freely flow to your accounts and you shall enjoy unmitigated freedom to convert ?? If you believe so ensconced in a Believer’s Church, believe me, you are languishing in an Idiot’s Paradise. There shall be then conversions of a very different variety and even you too, may be forced to convert in that situation. It will be just a call for absolute anarchy in the country, nothing else. Let me bluntly tell you Archbishop Couto, BJP is the ONLY, I repeat the ONLY nationalistic political party in the country which must never be defeated under any circumstance in the interest of your safety and security.

Mizoram, our State in North-East with 83% Christian population, has a devout Hindu as Governor and all Churches there have demanded his recall. If not recalled, they would boycott him !! Those Christians are neither secular nor nationalistic. They are separatist traitors who just deserve a very harsh punishment by our security forces. And you did not utter a single word of condemnation of those Churches at all, Archbishop Couto. Woe betide upon them, indeed. If a Hindu State and Deva-Bhumi like Uttarakhanda with 90% Hindu population could welcome a Christian Governor in Margaret Alva and a Muslim Governor in one Rashid without a word of protest, why can’t Mizoram welcome a Hindu Governor ? What sort of Christianity is this and what have they been reading in the name of Bible ?? You all are striving assiduously to absorb entire Hinduism within Christian fold through charade while Hinduism is gearing up to go the other way around with spectacular success rate. Archbishop Couto, Sanatana Hinduism is as ancient as the Planet Earth guarded by Param Brahmatma and whosoever exerted to destroy Hinduism, were destroyed themselves. Sanatana Hinduism has not only survived but flourished by leaps and bounds in spite of 17 deadly invasions in past 2500 years while all other civilisations disappeared like thin air !! Isn’t it a proof enough, you all are engaged in a futile exercise that may extinguish you all ?? Archbishop Couto, Sanatana Hinduism is the Dharma of Param Brahmatma and Hindu-s are ordained to represent that on Planet Earth. That is why, Hindu-s are very special human beings and no one may dare proselytising them lest calamities befall upon them. It is a warning for your survival, well-being and you must accept it very seriously.

Churches are already under decline and liquidation. Churches have a serious crisis of sodomy and rapes. It may be difficult for you and your brethren to believe, root-cause is hidden in the celibacy that has been thrust upon you all. Your concept of celibacy is so weird, absurd, juvenile, idiotic and moronic that sodomy / rape shall be natural outcomes automatically !! Celibacy goes into making of paedophiles, sodomisers and rapists while Brahmacarya goes into making of Rsi-s and Maharsi-s, Siddha Yogi-s and Trikaladarsi-s…According to Swami Ramdeva of Patanjali Group, there is not a single instance of a boy raised in Gurukula, apprehended for any crime like eve-teasing, stalking girls etc. so far. Being a Sanatani Hindu, I find entire Christianity absolutely unbelievable in spite of a network of Believer’s Churches !! Much to your relief, I am refraining myself from digging into the past of Christianity replete with gory tales of terrible crimes against humanity. Christianity may well beat Islam into pulp if a comparative chart of heinous crimes against humanity is prepared for scrutiny of all.

My demands from you are very simple. You and your Gangs of Missionaries have absolutely no business to tell us, your faith is superior and my faith Sanatana Dharma, inferior. Just stop conversions, declare that Christianity holds Sanatana Hinduism in very high regards and fundamental identity of the nation is Hindu, then remain hale and hearty as ever in the country. Islam and Christianity DO NOT belong to this nation, were smuggled into the country at sword-point and this fact must be accepted earliest possible to eradicate all conflicts whatsoever. Even then, can you tell me even a single name / case when a Christian was thrown out of this country just because he / she happened to be a Christian ? None, isn’t it ? There you are Mr. Archbishop.

Archbishop Couto, your first name happens to be ‘Anil’, by all means a Hindu name. It reveals your innermost agony as half of your being and half of your Soul are still Hindu !! Muster your entire courage and revert to Hinduism through ‘Ghar-Wapasi’. Wipe out the black stigma of forced / induced conversion that your ancestors left behind for you as their legacy for you to sulk in solitude or may be standing in a Confession Box !! We shall welcome you lovingly with open arms and receive you as our long lost brother !!

With lots of Vande Matarama, 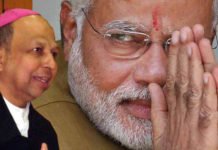