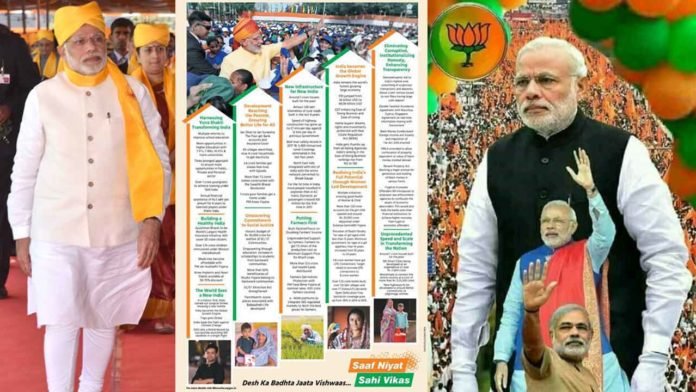 Narendra Modi Government have accomplished much more development in the country in their four years of tenure than 48-years of almost uninterrupted rule of Congress. Following principles of Antyodaya, development plans under ‘Sabka Sath, Sabka Vikas’, Prime Minister Narendra Modi’s Government have been committed to inclusive growth that ensured welfare of poor, youth, farmers, minorities and women. Even minorities are quite satisfied as Government have ensured ‘empowerment without appeasement’. Such a massive development extended to all sections of society, had never been witnessed before in country’s history.

Most conspicuous achievements of the Government have been –

Revival of economy When the Government was sworn in May, 2014, national economy was gasping for survival, currency was sliding, foreign exchange reserves under erosion and nation countenanced a menacingly bleak future. PM Modi moved methodically with extreme patience deflecting onslaughts from opposition, demolishing all hurdles to notch 7% GDP by the end of four years of his tenure. FDI has been steadily rising as the nation moved onto to first 100 preferred nations for investment. Even our long time adversary China too have just launched India Investment Fund with an appeal to all to invest in it liberally as Bharatiya economy is well-poised to enter into a golden era.

International relations In this area, Modi Government have performed exceedingly well. While BRICS has been energised, SAARC has been accorded a well-deserved burial courtesy our immediate western neighbour. Prestige and image of the country have expanded vertically as well as horizontally multiple fold with the nation being viewed as one of the most important powers in the world. Relations with immediate neighbours are as important as with USA or Japan unlike in past. Real moment of glory was arrived at when UAE allowed us to raise temple in their country. While Prime Minister is assiduously striving to raise the nation to the level of a superpower, his diplomatic efforts to cartelise petroleum buying countries to unite and neutralise frequent petroleum price-hikes by oil producing middle-east countries is unique in it’s own way. His intense efforts to revive Hindu and Buddhist circuits with South-East Asian countries proximate to China to wean them away from China and defeat hostile Chinese designs, are marvellous in vision. Quite paradoxically, Prime Minister proved his nerves in foreign relations in 2014 itself when he secured safe release of Bharatiya nurses from captivity of ISIS without bloodshed or use of force !!

National defence Modi Government have been aggressively pursuing upgradation of security forces in all respects. Their morale is now sky high and forces have proved their mettle on several occasions like surgical strikes across borders with Pakistan and Myanmar. Operation Gagan-Sakti, held in April 2018, was acclaimed worldwide with even China compelled to admire that. It was due to rising strength of security forces that Chinese had to retreat in Doklam and Kashmiri separatists brought to book.

MakeInIndia, Ujjavala, MUDRA Yojana, and JanDhan Yojana These development schemes have brought about revolutionary changes in lives of crores of deprived natives, languishing at the last rung of society. These schemes have been instrumental in women empowerment too as approximately 74% borrowers without collaterals happen to be literate and semi-literate women. Crores of women have been liberated from the agony of smoke-chulhas through Ujjavala Yojana. Every native of the country now has his / her bank account linked with Aadhaar so that there is no pilferage of subsidies by middlemen / musclemen. These schemes are so effective that even poorest of poor can dream of becoming entrepreneurs instead of being pathetic job-seekers.

Corruption free governance Not only there has not been even a single allegation of corruption on Central Government but also radical measures have been adopted to eradicate big-ticket corruption through digitisation, Aadhaar linking etc. All old cases of corruption charges are being probed meticulously by SIT, agencies and guilty brought to book as per the process of law.

SwacchaBharata, Demonetisation and GST These three are historic moves to clean the nation, nullify all illegitimately earned money, inflation as well as counterfeits followed by one indirect taxation system throughout the country. After temporary initial hiccups, these moves have proved to be great boons for nation’s economy that has started growing exponentially.

Social re-structuring Modi Government have adopted tough, realistic stand of issues like Haj subsidy, Triple Talaq and Halala, reservation for religious minorities etc. standing like a rock against all sorts of pressure and manipulations. These bold measures have imparted a new dimension to nation’s psyche altogether unknown hitherto.

These four years were largely consumed in laying foundation stones for a dynamic, thriving Bharatavarsa after mending, repairing all deep cuts, nicks and festering wounds inflicted upon the nation during five decades of Congress regime. Simultaneously, Prime Minister Modi has been relentlessly waging a long-drawn battle against all sorts of anti-national elements within the country bent upon driving the nation towards decline, destruction and disintegration. After reversing decline of the nation, PM Modi is furiously engaged in transforming the nation into a modern and dynamic one. In a nutshell, even poorest of poor have now started dreaming confidently of their golden future in years to come. Following lines of the famous American poet Robert Frost aptly describe the scenario on behalf of the greatest statesman in the world that Prime Minister Narendra Modi is –

Incidentally, these lines were also very dear to our first Prime Minister JL Nehru too !!