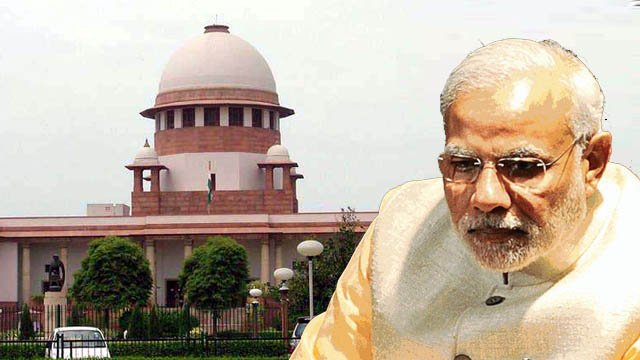 On two occasions, there had been mid-night swoops on the Supreme Court. First one by one terrorist / mass-murderer and the other, by his bosom-buddies recently for an issue that was purely political in nature. How could they succeed in opening heavily locked gates of the highest court past mid-night with so much security around and force ‘Learned’ Justices to hold intensive arguments for them? Why were not Attorney / Solicitor Generals instructed by the Union Law Minister not to appear in such ‘Premium’ (or Kangaroo !!) courts and appear only in normal course of hearings ? Have not Government encouraged such anti-national / bad elements to continue mid-night swoops on the highest court to continue with augmented frequency and transform Judiciary into a butt of derisive jokes in the country ? How could ‘Learned’ Justices of the ‘Mid-night’ Court agree to hold hearing so urgently when 60,000 cases have been pending for so long in the same Court and none of them could earn mid-night hearings with so many of them may be more than urgent ? How is that the historic ‘Mid-night’ Court never revealed any urgency of this intensity for 2.67 crore cases outstanding for resolution in various courts across the country for decades ??

There has been a very sensible amendment to the SC / ST Act ordered by the ‘Mid-night’ Court which Government have petitioned to be reversed and issue an Ordinance. This petition must be taken back by the Government and no Ordinance issued as the amendment is a very pragmatic move. Such an order by the highest ‘Mid-night’ Court after a long spell of multiple unjust / uncalled for judicial interventions viz. height of Dahi-Handi, continuance of immoral dens in the name of dance-bars, is a whiff of fresh air of democratic pragmatism and it must not be destroyed for sub-standard politics. Mr. Prime Minister, you are an international statesman and your word carries lot of gravity, emits intense gravitational waves !! If you condescend to explain entire issue explicitly to those who believe to have been wronged by the order, the conundrum shall be resolved amicably without much heartburn and loss of votes.

On the contrary, Government MUST petition the ‘Mid-night’Court as well as issue an Ordinance to do away with the Judicial uniform of three layers of black with a throat-tight, two-pronged white rectangular markers, unadulterated British legacies still continuing even after seven decades of freedom. These black layers of thick textile torture thousands across the country during non-winter and humid months of the year. That even exceedingly erudite members of Bharatiya judiciary have not been able to revamp their official appearance, is a profound enigmatic riddle that baffles me to no limits.

Government must issue an Ordinance without consulting / concurrence of the ‘Mid-night’ Court doing away with the menace of their ‘sacrosanct’ holidays. Crores of cases have been pending and they proceed on holidays so brazenly. I am dismayed to observe, these British era luxuries of damned Judicial holidays, do not prick their Judicial-Conscience at all !! Since these do not prick them, Government must pierce / impale them with the Ordinance followed by a law. Government must immediately deny their salaries for the periods of these British holidays in a liberated, democratic Bharata.
Since they rejected NJAC and wish to continue appointing themselves rather clone themselves, an Ordinance may be there to thrust NJAC upon them for the better. When going gets tough, one must stop get going ! Simple as that for you as you happen to be a man of steel nerves, Mr. Prime Minister !!

One Ordinance is urgently required for the ‘Mid-night’ Court to switch over to Hindi from Queen’s English. They have been resisting this switch-over so furiously as if all their judgements / proceedings are thoroughly perused on day to day basis by the British Crown !! And they do not intend to offend Buckingham Palace under any circumstance come what may as too many Judicial-Hazards are involved !! It is a theatre of absurdities and a very sorry state of affairs in a country like Bharata, to say the least.

Whenever I glance at children going to school anywhere on anyday, sporting tie over their school uniforms, picture of Thomas Babbington McCaulay flashes on my neurological horizons. Even after seven decades of independence, we have not been able to do away with compulsory ties for our school-kids and it does not embarrass anyone at all except one and one only out of 125 crores in this vast country !! One Ordinance / Office Order is required to stop this practice of ties for school-kids with immediate effect, Mr. Prime Minister.