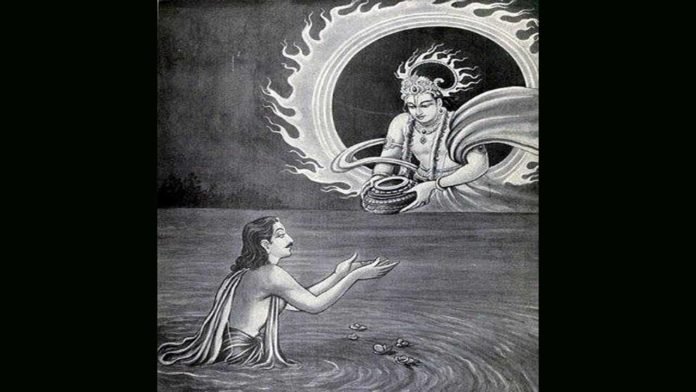 Then began one of greatest expositions of knowledge and wisdom through this dialogue of Mahabharata.

Whom has He for company ? Celestial deities are His companions.

Who is the cause of setting of sun ? Dharma causes sun to set.

How is man to attain what is great ? Ascetic austerities render a man great.

How is it possible for a man always to have a second companion ? Steady intelligence always serves a man as a steady companion.

How is this intelligence acquired ? Serving the elderly renders one rich in wisdom.

How are Brahmana-s ranked with divine beings and why ? They are considered divine because they study Veda-s.

Which practice renders them pious ? Their asceticism makes them behave as they do, so they are pious.

What of Ksatriya-s ? Wherein lies their divinity ? It lies in arrows and weapons.

Obligation to die renders Brahmana-s less divine. What of Ksatriya-s ? In their case, it is obligation to fear.

An intelligent person who enjoys senses, world holds him in esteem and is popular. Though he breathes yet he does not live. Why ? A man though he breathes, is not considered alive if he does not offer anything to deities, guests, servants and Pitri-s.

What is weightier than the earth itself ? Mother has more weight than earth.

What is higher than the heavens ? Father.

What is more fleeting than the wind ? Mind.

What is more numerous than grass ? Thoughts that arise in one’s mind.

Of fame ? Gift is the highest refuge of fame.

Of heaven ? Truth is the highest refuge of heaven.

Of happiness ? Good behaviour is the highest refuge of happiness.

What is the best thing of all things that is praised ? Most praiseworthy thing is skill.

Most valuable of all possessions ? Knowledge.

Best of all gains ? Health.

Best of all kinds of joys ? Contentment.

Renouncing what does one become wealthy ? Desire, when renounced, renders one wealthy.

What is THE WAY ? By whom is it constituted ? Those who are good, constitute THE WAY.

What is the sign of asceticism ? Staying in one’s own religion is asceticism.

What is essential feature of forgiveness ? Forgiveness consists in enduring enmity.

What is shame ? Shame is withdrawing from all unworthy acts.

What is mercy ? Mercy means wishing happiness to all.

What is simplicity ? Simplicity is equanimity of one’s heart.

Which enemy is invincible ? Anger.

Which disease is incurable ? Covetousness is an incurable disease.

Which man is considered honest ? He who desires good of all creatures, is honest.

What is ignorance ? True ignorance is not knowing one’s obligations.

And pride ? Pride is a consciousness of one’s being himself an actor or sufferer in life.

Grief ? What is grief ? Ignorance is grief.

What is patience ? Patience is subjugating senses.

What is real ablution ? A true bath, washing mind of all impurities.

What is charity ? Charity is protecting all creatures.

What is wickedness ? Wickedness is speaking ill of others.

What is the reward for one who always speaks agreeable words ? Why, he becomes agreeable to all.

When he acts with judgement ? He receives whatever he seeks.

When he has many friends ? He lives happily.

If he is devoted to a virtue ? He attains a blissful state in the next world.

What is the most surprising thing in the world ? Day after day enter into the Temple of Death, countless lives. Even while looking at this spectacle, those who remain, believe themselves immortal. Can anything be more surprising than this ?

What is THE PATH ? Arguments lead to no conclusion. Sruti-s are all different, one from the other. There is not even one Rsi whose convictions may be considered as infallible. The truth about religion and duty is hidden in caves. Therefore, that alone is THE PATH, the great ones have trodden.

What is THE NEWS ? World is full of ignorance like a pan. Sun is fire. Days and nights are fuel. Months and seasons constitute the wooden handle. Time is the cook that is cooking all creatures in that pan. That is THE NEWS.

Who is truly a MAN ? Report of one’s good actions reach heaven and it is showered over the earth. So long as the report lasts, so long is that person called a MAN.

Thereafter, Yudhisthira earned the boon of life for all his four brothers by virtue of his Dharma. When all brothers rose from the deep slumber, they were completely fresh and rejuvenated.

When Yudhisthira implored, Yaksa revealed his real form as DHARMA, father of Yudhisthira. And then he blessed them for successful completion of Ajnatavasa and victory in the impending war with Kaurava-s. Yudhisthira wept in joy on meeting his father, kissed his father’s feet again and again, sought one more blessing i.e. to overcome lust, anger, avarice, possessiveness, arrogance and envy. To which his father Dharma responded that the blessing was not required at all as Yudhisthira had it already. 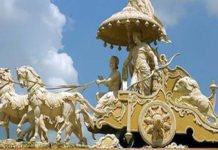