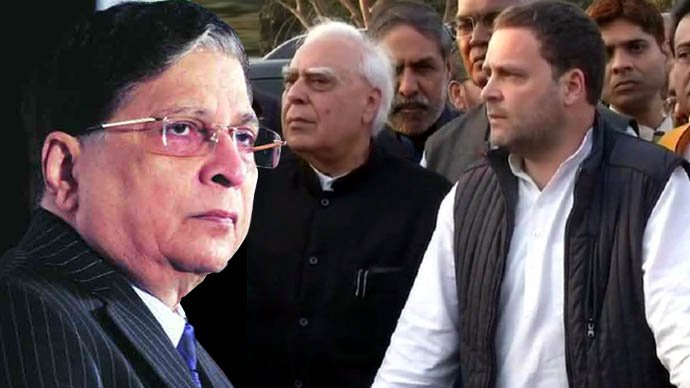 April 23, 2018 was not only a Black Day for Bharatiya Judiciary but also a Golden Day for the Constitution of Bharata.

Personal honour and prestige of a sober, erudite highest Judicial Officer of the country was poised to be badly mauled on one hand and the institution of Chief Justice of Bharata molested by a rapacious opposition determined to destroy the nation into pieces, on the other.

It was great relief to behold, Vice President addressed the call of nation, rose to the challenging occasion and nipped the sinister, ominous conspiracy in it’s bud. Vice President deserves to be saluted by the nation.

Not only unmitigated friction and attrition were deftly precluded, but also worthless anti-national opposition leaders were exposed like never before. Sanctity of Judiciary was protected and the Constitution upheld in a remarkable way.

Why are Congress led by Royal Nehru-Gandhi-Vadra Dynasty so venomously hostile to Chief Justice Dipak Misra, so much so that they have even risked their remaining political fortune by pressing such a frivolous Impeachment Motion for consideration?

Answer to the question lies hidden in entire history of the way the Royal N-G-V Dynasty has approached Bharatiya Judiciary particularly Supreme Court. Congress is still encapsulated in Indira Gandhi’s whimisical and despotic approach towards Judiciary.

She had appointed AN Ray as CJB on May 2, 1973 ignoring three other seniormost veteran Justices JM Shelat, KS Hegde and AN Grover and prompted Law Minister Mohan Kumaramangalam condescend and validate thus, “Certainly, we as a Government have a duty to take the philosophy and outlook of the Judge in coming to the conclusion whether he should or should not lead the Supreme Court.”

So, appointing pliable and manageable Justices to higher judiciary has been a Congress forte ever since they realised potential of the institution to forestall them in their nefarious anti-Constitutional designs so as to ensure, future of the Royal N-G-V Dynasty remains golden howsoever bleak that may be for the nation.

Unscrupulous CJB AN Ray teamed up with Justices MH Beg, YV Chandrachud and PN Bhagawati to deliver an altogether unbelievable edict that right to life and liberty was not a fundamental right at all!

Lone dissenter Justice HR Khanna was lynched by the Royal N-G-V Dynasty for failing to pass the ‘trial by fire’ ordained earlier by Kumarmangalam.

MH Beg was elevated to the august position of CJB. By this turning point of nation’s judicial history, MH Beg was audacious enough to initiate suo moto contempt proceedings against Times Of India’s Editor Sham Lal in Jan.

1978 for having criticised his earlier judgement of denial of right to life and liberty as a fundamental right. In spite of his loud and brazen arguments, MH Beg could not wash away the sin of that obnoxious judgement and his suo moto contempt proceedings were withdrawn by another Bench subsequently.

MH Beg’s ideology so precisely superimposed over what Kumarmangalam had uttered in Parliament that his accolades galore continued uninterrupted. He was roped in as Director of National Herald, Padma Vibhushan conferred upon him for his ‘outstanding services’ to life and liberty of crores of nation’s natives etc.

Similarly Justice Baharul Islam did several round-abouts in and out of Judiciary and Parliament alternately with great verve and finesse. Islam did an outstanding service to the Royal N-G-V Dynasty during trial of Emergency excesses.

Then arrived Justice RN Mishra who honourably exonerated all ‘Holy Cows’ of Congress from the taint of massive Sikh-slaughter as an aftermath of Indira Gandhi’s assassination by her Sikh guards.

Quite blandly, he blamed Delhi Police for the Sikh-slaughter of 1984, albeit another version of Jallianwala Bagh genocide ordered by Reginald O’Dyer during British occupation of the country.

Chief Justice VN Khare was very proud of being an ‘apple’ of Indira gandhi’s eyes and bragged about it privately!!

While throwing away his Judicial-Dharma into Judicial-Dustbin, he was bold enough to admonish the then Gujarat Chief Minister Narendra Modi for the ‘crime’ of not having followed his ‘Raj-Dharma’ diligently.

Padma Vibhushan reached him as automatically as Bharata Ratna came to be honoured by being conferred upon JL Nehru by the Government headed by JL Nehru himself!!!

In spite of 11 out of 14 charges discovered to be genuine after investigations conducted by the Royal N-G-V Dynasty regime, Justice Ramaswami was methodically defended by Kapil Sibal for full 6 hours culminating into ridiculing the impeachment motion thus “motion for the removal of a judge for purchases of a few pieces of carpets or a few suitcases”.

Commanded by the Royal N-G-V Dynasty, Congress defeated the motion by abstaining from voting as it would have hurt very pious soul of late Rajiv Gandhi who had incidentally appointed him in his capacity as country’s Prime Minister!!!

Most exquisite Judicial-Interference by the Royal N-G-V Dynasty under Indira Gandhi regime deserves a separate mention. When Indira Gandhi’s election petition was under adjudication at Allahabad High Court, Justice JML Sinha received a phone call one fine evening close to the Judgement Day, asking him to advise his wife not to observe Karwa-Chauth fast to prolong his life if he had decided to declare Indira Gandhi’s election null and void.

Justice Sinha calmy replied, “Fortunately my wife expired just two months back.” How much Justice Sinha was harassed and chased by the Royal N-G-V Dynasty, has been elaborately documented by several chroniclers.

Ostensibly, it must now be crystal clear to you all as to why the Royal N-G-V Dynasty is so venomously opposing incumbent Chief Justice Dipak Mishra. He is entirely unrelenting when it comes to principles of justice being conscientious and a man of his own mind. 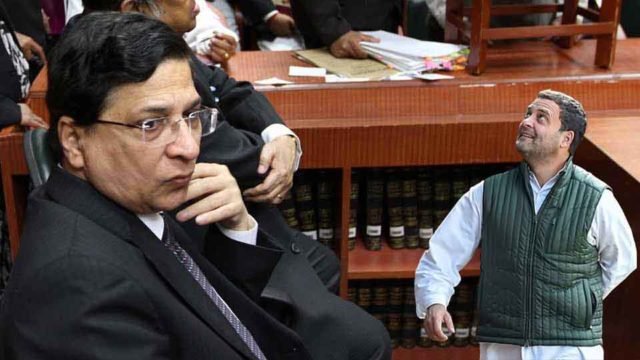 The Royal N-G-V Dynasty incited four serving Justices to Rebel Without A Cause, hold a press conference and declare, ‘democracy is in danger’ flashing images of Mulla Nasaruddin complaining of ‘Islam is in danger’ all around!!!

It was an age-old tactic and people in the country thoroughly enjoyed it in social media mirthfully. The Royal N-G-V Dynasty is mortally scared of Sri Ramajanmabhumi Case being adjudicated in favour of Sri Rama Mandir and all claims of a ‘pre-existing Masjid’ being trashed forever.

They are acutely conscious of the fact that the incumbent Chief Justice very much possesses guts and nerves to deliver such a decision and that would be the end of their political fortunes. Hence all this raucous brouhaha and nasty shenanigans.

The Royal Dynasty of Nehru-Gandhi-Vadra brooks no trace of Judicial defiance at all. They appointed a rootless politician as Prime Minister in LB Shastri who flew down to Tashkent and handed over entire victory earned by our Army / Navy / Air Force with their blood and lives, to the defeated foe in Pakistani Dictator Ayub Khan on a platter. Why should he have gone over there at all instead of ordering Ayub Khan to come over to New Delhi crawling on his knees begging for mercy?

And so swiftly he was wiped out to pave way for Indira Gandhi to succeed him and turned out to be the most vicious, venomous and vindictive Prime Minister in nation’s history. After Rajiv Gandhi was slain, PV Narsimha Rao was appointed as Prime Minister who proved himself to be the best Prime Minister that Congress delivered so far.

Very soon PVN Rao was ostracised and humiliated for having a mind of his own. It was for that reason Pranava Mukherjee was not offered Premiership and the Royal N-G-V Dynasty then appointed ManMohan Singh as Regent Prime Minister to warm the seat for Rahul Gandhi. As a perfect courtier, ManMohan Singh grew into being the most favourite Prime Minister for the Royal Dynasty.

I mentioned this tiny fraction of recent history even at the risk of digression only to bolster the fact that the Royal Dynasty always wished a courtier occupying every Constitutional position in the country, so appointed very carefully after verifying his / her impeccable track-record of boot-licking over years.

And if anyone dared to defy unseen / unheard Oath of Loyalty to the Royal N-G-V Dynasty after being installed in the Constitutional office, they would unhesitatingly launch a fierce no-holds barred campaign to denigrate and malign the ‘Brutus’! It is this very reason why the Royal Dynasty of Nehru-Gandhi-Vadra is now baying for blood of Chief Justice Mishra in spite of his having been appointed by them only.

The sordid tale also triggers another valid question whether lawyer-members of Congress charging lakhs of rupees for a single ‘Mukh-Dikhai’ in courts really deserved stupendous fees that thay commanded and demanded from their clients. How can one be certain beyond an iota of doubt that those exhorbitant legal fees were in reality, price for managing benches and judgements and the brazen loot shared by all those ‘whomsoever it may concern’!!! And now that they are outrightly unable to pull strings, they are rattled and tormented like fish out of water!

May the vanishing tribe of Chief Justice Mishra multiply and proliferate as much as possible. Nation shall always breathe easy with such upright officials like him occupying high Constitutional offices of authority. 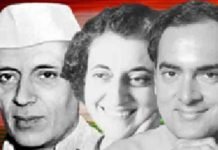 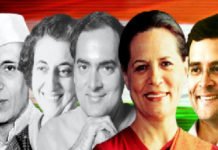 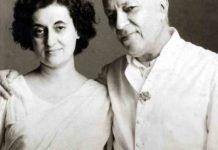