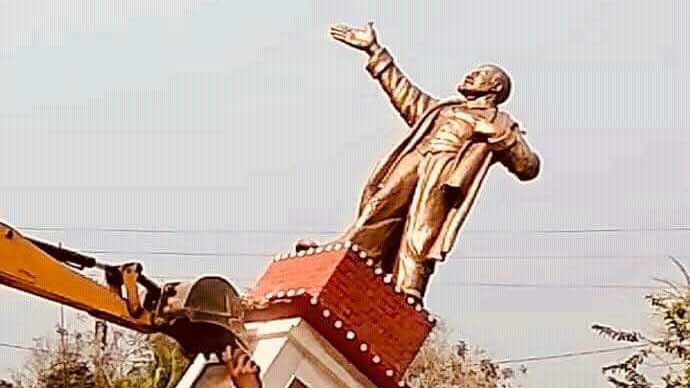 Vladimir Lenin, a sworn mass-murderer and traitor for his own country, has been demolished yet again in Tripura, far away from his hometown in Russia. He has already been demolished umpteen times in so many towns in so many countries and still counting… asserts, how much the monster is hated all over and the magnitude of intense anger against him. Lenin shall be demolished several more times in different regions in years to come.

Lenin happens to be such a hated figure that his statues have been spat upon, kicked and urinated upon by thousands in Russia and other countries. The mass-murderer just destroyed a beautiful country that Russia is.

In cahoots with venomous anti-Hindu anti-nationals like Indira Gandhi, Nurul Hasan, Irfan Habib, they destroyed education system of the country, infiltrated every Constitutional body, destroyed economy and pushed crores into heaps of miseries and agonies for seven decades.

They commit ONLY crimes against society and nation… just crimes and nothing else. That arrogant Lal-Thug Jyoti Basu burned down Bengal to ashes in 36 years and the Great Scoundrel used to talk as if he was presiding over Singapore / Hong Kong / Japan !!!!!! All these Communist scums deserve to be liquidated by a firing squad in full public view.

Manik Sarkar as CM of Tripura survived on a salary Rs.5000/- pm, bank balance of Rs.2500, walked to Office everyday…and the wretched scum was deified for his ridiculous life-style as some sort of Deva !! That is how Communist Satans hoodwink innocent masses and force them to live and die miserably forever. They are also sworn enemies of prosperity and wealth. And these worms enjoy life at some hidden corner far away from public scrutiny. His ouster after 25 years by Rightists is a historic event and a turning point in nation’s history.

Russian President Boris Yeltsin had commented, Communism should have been experimented in a small country first on trial basis. If successful, it could have been allowed in by more countries. Unfortunately, majority of people are innocently stupid in almost every country in the world, turn whimisical on attractive rhetorics, act wrongly and generations suffer thereafter.

Time is ripe to demolish statues of EV Ramaswami Naicker Periyar at various locations in Tamil Nadu. He is the ugly Satan who used to beat Murti-s of Shri Rama with Chappals on public crossings, roads, maidans across TN during the decade of 1960s practising the rubbish of Aryana-Invasion Theory propagated by those British Thugs. Can you visualise, how much humiliation our previous generation had to undergo in the Raj of Nehru-Gandhi-Vadra Dynasty ?

After some time, nation shall be matured enough to spit at and demolish statues of Nehru-Gandhi-Vadra Dynasty all over the country, sooner than later.