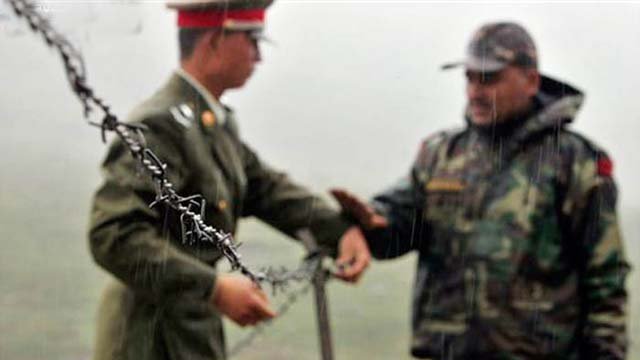 In July 2013, I was invited to attend a seminar on BHARATA-CHINA BORDER DISPUTE at VIF in New Delhi, addressed by Special Director (Intelligence Bureau) who had been our border-negotiator with China for more than 20 years.

First hand details and the analysis he provided with maps, documents were really amazing while conclusions, sensational. I am sharing herewith some of conclusions in his own language which I feel, everybody in the country must know –

Regular Chinese intrusions started right in 1954 itself !! In 1959, Nehru wrote a weeping letter to Chinese PM Chou En Lai in the language of a jilted / ditched lover begging him not to treat us so shabbily!!

The Special Director (IB) read out Nehru’s sob-letter before us and the entire audience was stunned to listen to it’s contents. All intrusions have been kept classified and the nation, in dark for reasons best known to Nehru-Gandhi-Vadra Dynasty alone. Several times Army took the initiative to be decisively tough with them but the Dynasty stopped them immediately from being tough with Chinese.

Undefined borders due to inhospitable terrains is a myth created by the Chinese !! Borders and every inch of it is precisely mapped, defined and ownership established with authentic documents.

Chinese DO NOT WANT to solve the border dispute. It is in their benefit to linger on with the dispute / controversy as long as possible.

IN REALITY, THERE IS NO BORDER DISPUTE AT ALL!!

How ? In 1892, the then Chinese King submitted a detailed map to the then British Viceroy in New Delhi showing Kailasa Mansarovara, Ladakh, Aksai Chin, Arunachala Pradesh as Bharatiya territories !! It was authenticated by them, British accepted it and held it as final. It is also confirmed by the then revenue records, still in possession of our Government. And the situation continued so till 1947.

After Communist takeover of China, they declined to accept those authentic documents anymore. They pressurised the then Tibetan Dalai Lama to demand Tawang, Sikkim, Bhutan and nearby areas to be returned to them !!

In 1954, Nehru signed Panchasheel Agreement with China wherein NOT A SINGLE CLAUSE is in favour of Nehru’s India !!! HM Sardar Patel had already started warning Nehru right since 1947 itself and bureaucrats of the day pressed Nehru not to go ahead with the Agreement but the traitor in Nehru did not yield. At that time China was a very weak country, desperate to destroy our relations with Tibet and very eager for Bharata to accept Tibet as Chinese territory.

Intrusions, gun-fire, kidnapping Bharatiya soldiers, snatching their arms, keeping them captive for days together before releasing, writing of rude / stinging letters to PM Nehru by Chinese PM, became a routine affair immediately after Panchasheel Agreement was signed, since 1954 itself.

Then came the war of 1962 in a self-created pathetic condition of Army, their inability to fight back for want of ammunition, winter clothing, snow-boots etc., an intentionally invited debacle and humiliation for the nation by design and intent, were entirely a NEHRU CREATION. Our soldiers were brutally murdered and Nehru just kept mum. The then IAF Chief repeatedly pressed Nehru for permission to bombard Chinese intruders but Nehru was resolute in denying them the permission. That permission would have entirely changed contours of the war.

Line Of Actual Control is a myth created by the Chinese according to their convenience. They continue shifting LAC towards Bharata, on table, on ground, everywhere !!!

After 2008, there has been a spurt in intrusions ranging from 400 to 500 on land / air / boat…that too of aggressive nature, not ordinary / routine ones.

All their intrusions are mainly confined to the area that may be called corridor between Bharata and Tibet as well as Bharata and Xinjiang, largest province of China. They are worried about the Bharatiya Army entering into Tibet and Xinjiang as these two regions are under considerable turmoil of rebellion. Self-immolations in Tibet and armed revolt with two-way bloodshed in Xinjiang province are matters of great concern for the Chinese.

SO THEY ARE ACTUALLY AFRAID OF Bharata !!

I pointedly asked the IB official as to why our Govt. have been so timid, submissive in their responses. He said there has been no valid, convincing reason !!! May be some foreign pressure, he guessed. After all, he was speaking in public !!

Military threat coupled with arm-twisting diplomacy shall certainly force them out of our occupied territory. But then for that, we need a Sardar Patel / Kalyan Singh / LB Shastri / Narendra Modi as Prime Minister and not Nehru / Manmohan Singh.

It was really a stunning eye-opener for the entire audience. 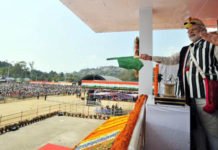