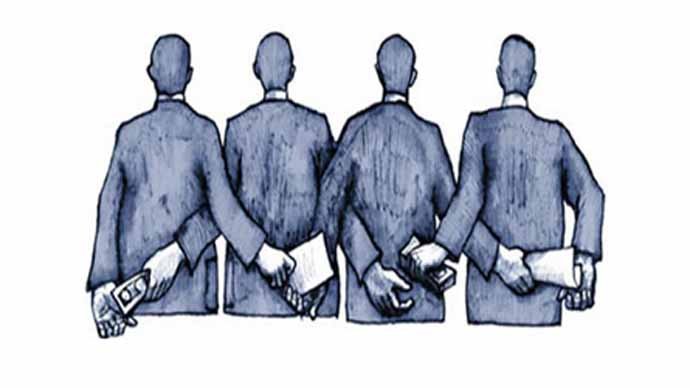 At the stroke of midnight between Aug. 14 and 15, 1947 in utter darkness, nation was stabbed in her back by the incoming Prime Minister…a nation that was battered by hundreds of years of foreign domination, sustained plunder of her wealth, shattered by Partition-1947 and traumatised by rivers of blood that flowed across the border.

The then Prime Minister not only watched like someone worse than Nero, he steered the nation on path of treachery, deceit, plunder and mass-murders through communal riots.
These are the four curses that the nation of Bharatvarsa has been afflicted with all these years –

Has been officially organised by the ruling Nehru-Gandhi-Vadra Dynasty which ruled over the country for more than six decades. Stashing the wealth plundered in overseas accounts has become a de facto policy of their’s as if mandated in the Constitution.

This malevolent family is responsible for 99% of ills afflcting the nation. Nehru signed Transfer Of Power Agreement 1947 with the outgoing Viceroy Mountbatten before freedom was handed over to him. This agreement categorically states that the nation shall continue to be governed by the same old British laws and systems of loot, extortion and torture.

Copy of the agreement has been displayed by Swami Ramadeva on Astha channel several times over. By signing that agreement, Nehru became the worst traitor ever known to humanity in just one stroke by stabbing in the back of 33 crores natives of the country in 1947. Nation has been severely compromised by this dynasty. Under that dispensation, Nehru-Gandhi-Vadra Dynasty is under an obligation to plunder national wealth and transfer it to their British masters.

Nehru had declared, corruption does not matter at all as country’s money remains within the country !! His daughter Prime Minister Indira Gandhi, well-known for her Emergency-1975, justified corruption on the ground of it’s being a global phenomenon. Institutionalised corruption wrought by this condemned family unleashed runaway corruption throughout the country and every Govt. department / official activity became a money-minting exercise. We ranked at the bottom of the list of corrupt nations published by the Transparency International with more than $1500 Billions of our wealth stashed abroad.

did not exist in the original Constitution drafted and finalised by the Constituent Assembly. It was introduced by PM Indira Gandhi with the brute / ignorant majority that was handed down to her by gullible, innocent voters of the country with high expectations of carrying the nation to greater heights of glory, prosperity and unity.

In fact, Muslim-appeasement as precursor of secularism was practised and regularised by MK Gandhi himself during British occupation of the country. While there is no other country known as secular in the world, this nation of Rsi-s, Maharsi-s, Sanatana Adhyatma and Tapa was handed down the morbidity of secularism by a venomous and vindictive Prime Minister that Indira Gandhi was, overlooking 85% population of Hindu-s.

The curse of secularism has been carried to very dangerous dimensions and now it poses a grave threat to security and integrity of the nation. Very conveniently with a malevolent intention, historical stark reality of a Hindu nation always allowing other faiths to survive, has been suppressed with the brute and blind force of secularism.

has become an economic curse on the nation. It is a sheer budgeted and officially sanctioned loot of nation’s wealth. Instead of reviewing subsidy allocations ruthlessly with a Zero-Based Budgeting policy, instead of constantly focusing and fine-tuning subsidy policy, grants have been going up by leaps and bounds every fiscal year.

The malaise demands thorough forensic investigation as well as a White Paper on it’s entire existence. Not only thieves / looters have been having a gala subsidy time, it has brought inefficiency / lethargy of monumental dimensions in our national psyche. Why should anyone work if rupee-doles are available for a song ?

And one of the worst subsidies is the Haj subsidy….enforced upon the nation by a Pro-Islam / Pro-Jesus Secular Govt. for those who abuse Hindu majority as ‘Kafirs’ but have no shame on going to Haj with Kafir’s funds !!! It was only after 2014, Government headed by Prime Minister Modi wrought a serious dent on this plunder-machine through the mechanism of Aadhaar and Direct Benefit Transfer of subsidy into accounts of those who really deserve. Though a lot of ground is yet to be covered, enemies of the nation are hell-bent on abolition of Aadhaar by any means.

That would have done wonders to the nation and also to the deprived / unfortunate communities too. Alas, it was not to be. Reservation has reduced deprived ones to the level of snatchers. Not only the nation stands severely compromised on all fronts, it is causing deprivation of another kind, talent migrating out of the country.

Is it intentionally orchestrated by Nehru-Gandhi-Vadra Dynasty at the behest of foreign masters to wreak havoc in the country ? Nation have had enough of reservation by now which was planned just for 10 years by authors of the Constitution. Reservation has another sinister effect among Hindu-s in the manifest of casteism.

We should no more allow the absurdity of a Dalita-Pujari worshipping intellectually blind Karunanidhi of AIADMK in a Siva Temple well over the Sivalinga !! Now it is high time to say good-bye to reservation and set the nation on path of glory for everyone on equal terms, an out and out MERITOCRATIC NATION, CHAMPIONING EXCELLENCE EVERYWHERE.

These four curses must be addressed appropriately by Government for the benefit of all.