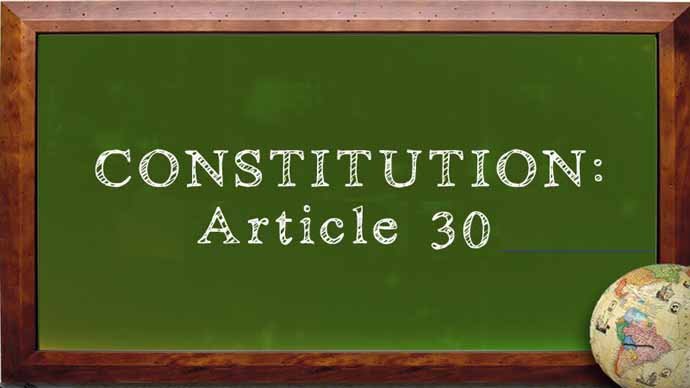 The Article reads as under –

(1) All minorities whether based on religion or language, shall have the right to establish and administer educational institutions of their choice.

(1A) In making any law providing for the compulsory acquisition of any property of an educational institution established and administered by a minority, referred to in Clause (1), the State shall ensure that the amount fixed by or determined under such law for the acquisition of such property is such as would not restrict or abrogate the right guaranteed under that Clause.

The Article appears to have been drafted with the sole purpose of minority appeasement to promote vote-bank politics and the malevolent anti-national purpose of discrimination against Hindu-s. Let us examine how –

The Article allows minority institutions to reserve 50% seats for their so-called minority students. But Hindu-s in NE / Punjab are NOT minorities though they are numerically in minority !!
For instance, deriving undue advantage of the Clause, St. Stephen’s College in Delhi reserved 50% seats for Jesus Putra-s which constitute just 1% of the total population in Delhi. Thus, Hindu-s are paying for selective empowerment of Jesus Putra-s through their nose !!
95% expenses are paid by tax-payers majority of which are Hindu-s.

ALL IN THE NAME OF Pro-Mohammed / Pro-Jesus / Anti-Hindu SECULARISM !!

If we go by Census figures, 2.3% Jesus population is controlling 22% of all educational institutions i.e. 40,000 in numbers !! Mind-boggling, indeed.
Literacy rate among Jesus Putra-s is 80% while overall, 65%. Hindu-s have paid through their nose for their literacy at the cost of themselves.
They enjoy unlimited tax, land allotment and plethora of other benefits.

ARTICLE 30 TERRIBLY VIOLATES ARTICLES 23 & 26 OF THE UNIVERSAL DECLARATION OF HUMAN RIGHTS to which Bharata is a signatory.

Hindu majority is under-privileged due to centuries of alien rule in which they were shut out of power and discriminated against.
Right to Education Act too, supports them to discriminate against Hindu-s as majority of schools are controlled by missionaries.

During 2006-7, almost $ 100 million were received by missionaries as assistance, mostly spent on induced conversions and discrimination against Hindu-s.
Due to a plethora of favors like preferential land allotment, subsidies etc., Hindu-s were not allowed or encouraged to establish schools for themselves.

TRANSFORMING A CIVILIZATION THROUGH DISCRIMINATION

Nobel Laureate in Economics Thomas Schelling showed that even a small preference for one’s neighbor to be of the same color could lead to total segregation. He also expounded that once the cycle of separation-prejudice-discrimination-separation begins, it has a self-sustaining momentum.

What these missionaries are planning is that once the conversion momentum picks up, just like rapidly increasing viewership of a successful movie, as the word of mouth gets around, growth in number of Hindu-s leaving for Christianity shall escalate from a trickle to mass exodus.

50% reservation in colleges has played an important role in rise of this population percentage. This is particularly true for the lower income majority community families with young children and youths in need of education and employment. Assuming an average of 300 students and staff in an institution, with 40,000 Jesus controlled institutions, it comes out to be some 12 million seats. Now missionaries can deny some 6 million seats to non-Christians, mainly Hindu-s.

Post 1990, the Article played a primary role in devastating majority community economically in the state of Kerala by marginalising their educational institutions.
55% of Hindu population in Kerala control 11.11% of the bank deposits.
19% Christian community commands 33.33 % and 25% Muslim population, 55.55% of bank deposits !!!!!!!!!

More than 60% professional seats are in the hands of so-called minority communities in the state of Kerala courtesy Article 30. Same is the story with scholarships. Unless you convert, you cannot receive professional education in Kerala. Every conversion adds to the social tensions / friction leading to bloodshed / sanguinary battles.

Hindu-s are constantly under marginalisation due to Article 30.

Apolitical middle and upper Hindu classes who do not vote, are inviting lot of trouble for themselves and the nation.
Article 30 of the Constitution must be abrogated and replaced by something like what USA has – The Civil Rights Act 1964 imposing a full-scale ban of discrimination instead of discrimination in the name of minorities.

That alone shall meet both ends of justice and fair play.