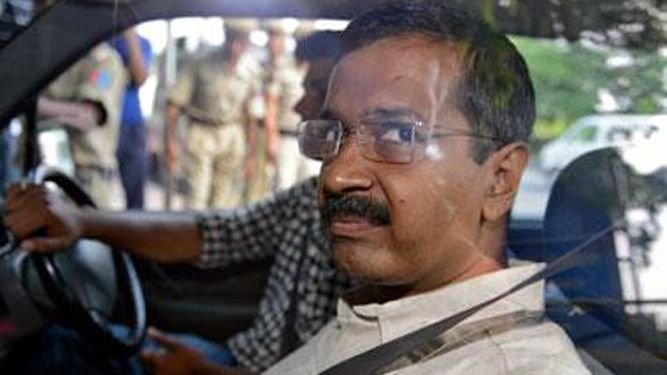 He turned out to be a huge disappointment for the so-called Educated Class of Bharata who fondly viewed him as a new generation POLITICAL ENTREPRENEUR! Within 48 days to be precise, he landed on the desk of “BIFR” alongwith his motley crowd of maverick louts, known as Aam Admi Party, eager to bow out wretchedly.

He raised hopes of masses to Himalayan heights, then crashlanded like a meteor raising worthless heat, dust, hue and cry! The kind of immaturity blended with stupidity that he displayed, was quite a shock for the nation. Quite literally, he ran a ‘Sadaka-Chaap’ Government right since the word Go.

This Jan Lokpal brand CM authored and sanctified altogether newer norms of Nobody’s Government much to the consternation of President that compelled him to voice it explicitly in his Republic Day address to the nation.

After public show of the trailer of the Theatre of Absurdity, The Liliputian is now raring to capture Lok Sabha at the forthcoming electoral hustings. Probably to become a 48 hour Prime Minister with his band of Well-Educated / Well-Heeled Idiots of India including a glamorous Hi-Wi-Fi banker Meera Sanyal of now defunct (!!!) ABN Amro Bank, lawyer Prashant Bhushan who happened to be thrashed inside court premises much to the amusement of nation and several other stooges of Enemies Of The Nation, bankrolled by hostile anti-Hindu / anti-Bharata forces based overseas.

There is every reason for The Educated Idiots of India who voted him to power this time, to hate him, nurture excessive contempt for the man. It is because if voted again with substantial number of seats in forthcoming Lok Sabha, The Living Legend of Good Governance, Narendra Modi may be stopped from being anointed as PM, to herald a new era of multi-dimensional prosperity, affluence and self-respect of as well as for the nation. This hatred and contempt for The Liliputian MUST NOT be personal. It should be strictly converged on his nefarious designs that he has for the nation on behalf of his foreign masters viz. Ford Foundation, UK based NGOs etc. If The Educated Idiots Of India decide not to hate The Liliputian, it shall lead to a situation of face-to-face encounter with a calamitous disaster of enormous dimensions. Unity and integrity of the nation shall be seriously jeopardised, thereupon.

I shall explain to you why you should and must ‘hate’ this man.

Lust for power and pelf hidden in his bosom has been proved beyond an iota of doubt. In a tearing hurry, he kicked away CMship of Delhi to accelerate his campaign for Prime Ministership ! Such a maniac, obsessed with the office of PM, shall bring about unmitigated disaster and ceaseless miseries for the nation already groaning under the 10 year old mis-rule of a Deaf & Dumb / Mentally-Stunted Prime Minister. Much to the glee of his American Masters, he shall see to it that the nation is disintegrated into pre-1947 Suba-s so that all of them can be easily gobbled up one by one by fiendish forces of Islam / Christianity / American imperialism / European colonialism. Silly opposition of the USA to the referendum results in Crimea to unite with Russian Federation, is a warning sufficient for The Educated Idiots of India.

Halo of honesty and integrity surrounding him is completely hollow. He is a proclaimed Bribe-Giver !! In the form of power subsidy, free water, free…free, a perfect recipe to destroy all economic parameters throwing away all norms of governance into dustbin. He loves to be bribed too…in the form of grants from Ford Foundation, in the form of Magsaysay Award from Ramon Magsaysay Foundation. Most of the founder members of his malevolent party are Ford Foundation annointees. All such awardees are confirmed anti-nationals too. Now, even the Nobel Prize too, has joined the bandWagon (R !!) as Amartya Sen, so-called intellectual-economist (or a bla-bla fool) finds lot many goody-goodies in this Liliputian !!!

The Liliputian does not have any respect for law or the constitutional form of governance. His ministers and party-mates are always hell-bent on taking law into their hands and dispense justice at mid-night, at GB Road crossing, on New Delhi Railway Station Platform no. 12, in front of BJP’s office etc. etc. !!! Legal proceedings, adjudication, court premises…are an anathema to them. With an absurd looking cap on his head covering the filth inside, he declares pompously, “Yes, I am an anarchist.” On being appointed PM, The Liliputian shall declare from the ramparts of Lal Quila, “Yes, I am a Naxalite, I am a Maoist. So what ?”

The Liliputian derogates and threatens media. This is a horrible, suicidal blunder that he has done. By doing that, he has blatantly revealed, he brooks no dissent. I am not so stupid to call him Hitler / Dictator and what not. Most appropriate epithet that describes him correctly in my view is LUNATIC. The Liliputian has proved himself to be a Lunatic. What is the merit in explaining to him that free media / press are THE ONLY LONG-LASTING corrective forces because they are backed by the firepower of truth and public opinion. Also because, when a section of media is biased or compromised, another section of the same media would become determined by virtue of public opinion, by virtue of competitive journalism to throw away rotten potatoes out of the profession. To me, it is a mysterious phenomenon which I have not so far observed in Judiciary, in Parliament or in the Executive as they all tend to join hands surreptitiously to back-scratch one another. The episode of Prasun Bajpayi too, confirms the same. Arwind Kejariwal wishes to have media / press dance on his finger-tips, dubbed CRONY-JOURNALISM by some.

The Liliputian has authored his own version of Constitution which he calls SWARAJA. It is claimed to be a pirated version of a book with a different title by the aggrieved author. “DIRECTIVE PRINCIPLES” of his Constitution provide for raising MOHALLA SAMITI-S in every Mohalla as an honourable and prudent alternative to the present monolithic Parliament !! That means, every Mohalla shall have it’s own parliament in the form of Mohalla Samiti, passing laws and statues confined to the Mohalla ONLY !! Great Soul of Dr. Ambedker must be ruing the day he drafted The Constitution of India after a massive exercise, after wasting so much mid-night oil and his personal calories.

The Liliputian has invented a powerful Vision-Mantra too. “We are doing this for the Aam Aadmi” is the Mantra that allows him to fling mud on anyone, allows his band of louts to indulge in arson anywhere, dare to disrupt / ridicule even Republic Day Parade, appeal to people not to pay water-bills, tearing electricity bills in public, disconnecting electric meters, even photocopying all Delhi Government’s official records before quitting…that being a serious violation of the Official Secrets Act, I believe. Collecting photocopies of official records at mid-night in Sachivalaya before quitting, is a criminal act that qualifies him to be lodged in Tihar Jail for rigorous imprisonment. However, the moot question is, what action you may expect from UPA II Government / Party full of Traitors & Dacoits !!

The Liliputian has no confidence in detailed reports dished out by official bodies like NSSO, Planning Commission etc. He relies on casual details provided by his lout-brigade or a handful of disgruntled people belonging to the place he condescends to visit. He trashes even surveys, he even refuses to believe that there is a Modi-wave engulfing the nation after so much of mad-governance wrought by MMS / UPA II !! If economic policies are drafted by Mohalla Samiti-s based on data provided by this Liliputian, you will have to allow your faculty of imagination run riots to figure out colour and contours of a Nation of Mohalla-s and not States.

The Liliputian swears by his children to convince mindless cynics and sceptics like me, of his absurd intentions !! If a Blueline bus-conductor of Delhi does that, I shall not be surprised. But if a CM does that, I am shocked and horrified. Doesn’t it reflect on his very poor upbringing, lack of right Samskara-s ? Then he quite effortlessly trashes the ‘affidavit’ sworn by his kids !! Do you wish to have a Prime Minister who swears by his wife and children at 9.30 am, on Aug. 15 every year of his tenure, from ramparts of Lal Quila, telecast live by all international channels across the world, several Presidents & Prime Ministers watching him on TV channels in their offices / homes ???? What will they think of us, our country ? That we Hindu-s are so stupid, wretched idiots that we cannot even produce a dignified Prime Minister for ourselves, that we cannot govern ourselves, that it is ONLY the White Man’s Burden to rule over this country ? Are you all, The Educated Idiots of India not horrified by the possibility ? If yes, then why are you all joining the Liliputian in droves across the nation ?

Otherwise, be prepared for a scenario of Prime Minister sitting on ‘Dharna’ bang opposite South Block or the Rashtrapati Bhavan for a set of demands to be honoured by himself only !!!! And the whole world laughing at us, much to their merriment.

The Liliputian grabbed power with support of Congress (I)TALIAN only because ‘Jhadu’ can be handled ONLY with ‘hand’ and NOT with ‘Kamal’ !!! In fact, he had no other alternative to boot. That was his ‘intelligent’ decision !! Then he resigned in 48 days. You know why ? Life of ‘Jhadu’ is roughly two months, not more than that. Once again, an ‘intelligent’ decision !!

JUST DO NOT VOTE THIS MAN / PARTY TO POWER IF YOU WISH TO SEE THE NATION ALIVE IN FUTURE.
Note – The article was written in 2013 when AAPKejariwal had resigned his first shot as Delhi CM and waves of anger sweeped the nation caused by horrifying mal-governance of UPA-II headed by ManMohan Singh. I hope, the article reflects prevailing mood of the nation in those years quite accurately.
Today in Jan. 2018 when AAP-20 MLAs have been disqualified, the article has turned quite prophetic in it’s evocation.