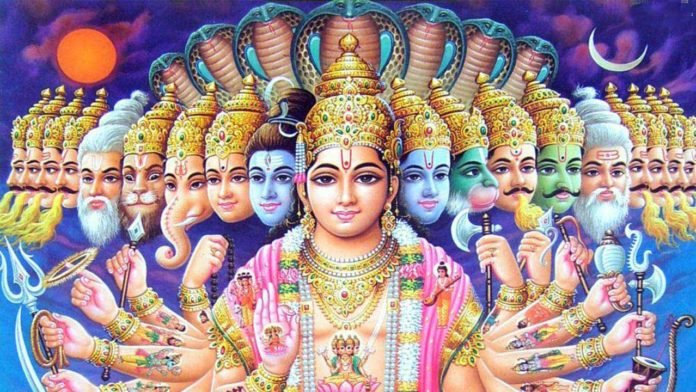 In social media of Facebook and Twitter, I am frequently ridiculed and berated for my faith of Sanatana Dharma that is purported to boast 33 crore Devi-s and Deva-s to worship.

They also condemn Hindu-s worshipping plants and animals too. Those ‘they’ happen to be mostly Roman Catholics of Goa, Protestants of Nort-East Bharata, ‘Khalistani’ brand Sikhs from Canada and a motley crowd of ISI brain-washed Sikhs residing in Jammu. When countered and challenged, they issue me warnings / threats of dire consequences which I thoroughly enjoy and laugh at, following foot-steps of my hero Russy Karanjia, late editor of a weekly tabloid Blitz which used to be published from Bombay.

I am dismayed to behold, Sikhs do not wish to accept the reality that Sikhism is one of so many streams emerging from the Gangotri of Sanatana Hinduism and Sikhs have been Rajputa-s in the erstwhile scheme of Varna order. Catholics / Protestants / Muslims do not wish to accept that their faith does not belong to this nation and those were forcibly imposed upon their ancestors by intruders from overseas.

There have been others too, who are ‘lambasted’ like that which many of them meekly ignore / tolerate, some explain away by saying that it is 33 only and not 33 crore, that ‘Koti’ does not necessarily mean ‘Crore’ etc. Let me now set the records straight for the benefit of all who may be seeking accurate perception of the imbroglio even at the risk of being condemned further.

We are well aware that Absolute Entity is binomial in structure and likewise, all sub-entities too, are binomial in configuration. Cetana i.e. Consciousness and Jada i.e. material together create an Absolute Entity, also adored as Param Brahmatma. Param Cetana, also known as Samasti Cetana i.e. Absolute Consciousness of Param Brahmatma allows Himself to manifest / proliferate into innumerable individualised Cetana-s, circumscribed by Ahamkara, also known as Vyasti-Cetana as well as Atma.

In a parallel and compatible cosmic event, Jada too manifests / proliferates into innumerable entities through the processes of aggregation and conglomeration, all absolutely devoid of Cetana at the behest of Param Cetana. Jivatma comes into being ONLY when Vyasti-Cetana associates itself with Jada. It is also known as embodiment or birth and it’s converse, dis-embodiment or demise.

In Sanatana Dharma, it is Cetana who is worshipped, whether Param Cetana of Param Brahmatma or Vyasti-Cetana of a living being who may be an ant or elephant. Every manifestation of Cetana is adorable irrespective of contours imparted upon by various conglomerated derivatives of Jada. Every Vyasti-Cetana possesses the potential to attain absolute divinity. Quite logically, there are innumerable Vyasti-Cetana-s i.e. Atma-s who are already Deva-s or poised to evolve into Deva-s.

Thus Sanatana Dharma has infinite number of Devi-s / Deva-s to be adored and worshipped, not merely 33 crores as grossly mis-understood or mis-interpreted by some. So there is no dearth of Devi-s and Deva-s to chose from for worshipping as each and every Vyasti-Cetana is adorable and deserves to be worshipped.

Concepts and realities like Vasudhaiva Kutumbakum, Ahimsa etc. spontaneously spring forth as soon as you concede, every Atma is an adorable celestial Deva. Philosophy behind Sanatana Hindu greeting in the form of ‘Namaste’ too, is based on that axiomatic truth alone.

When a Hindu worships a plant or an animal, it is Vyasti-Cetana hidden within the plant or animal as the case may be, is worshipped and not body of the plant or animal in question. So cynics, sceptics, atheists, hedonists, nihilists, sensualists and of course, secular-lunatics have absolutely no business to ridicule Sanatana way of worshipping some plants and animals.

When a Hindu worships a Murti carved out of Jada viz. stone, wood, glass, soil etc., it is Vyasti-Cetana ensconced within the Murti after Vedic ritual of Prana-Pratistha is solemnised, is worshipped and NOT the idol crafted of Jada material. It naturally implies, it is Cetana that worships Cetana with the means of Jada.

Hence, Murti-Puja cannot be accurately translated into or described as Idol-worship as Murti is not an idol at all. Murti is a repository of divine Cetana whose Prana-Pratistha has been solemnised through invocations, a manifestation of the Deva or Devi for whom the sacrosanct Vedic ritual of Prana-Pratistha has been carried out. All those individuals, empires, Kingdoms have been razed to dust that destroyed such a Murti / Mandira or under whose regime, such instances of desecration has / had been enacted. Desecration of Cetana inevitably invites terrible consequences to bear with.

Tailanga Swami Maharaja, a Siddha Yogi and contemporary of Swami Ramakrsna Paramhamsa who came from Andhra Pradesh, settled down on banks of Ganga at Varanasi, lived for almost 270 years, prayed to the small Murti of Ma Kali whom he used to worship, to appear before him and his disciple to bless both of them. Ma Kali did emerge from the Murti after his invocations manifesting Herself as a young girl, blessed both and reverted into the same Murti. In this exceedingly mysterious nation, such events are quite frequent, neither rare nor exceptional albeit accessible only to those who are imbued with Sraddha and Bhakti unto Him or Her.

Hence as a matter of fact, those who ridicule Sanatana Hinduism for having 33 crore Deva-s / Devi-s to chose from and worship, are in reality, laughing at their own abject ignorance about an intense Adhyatmika mysticism as ancient as the Planet Earth itself.