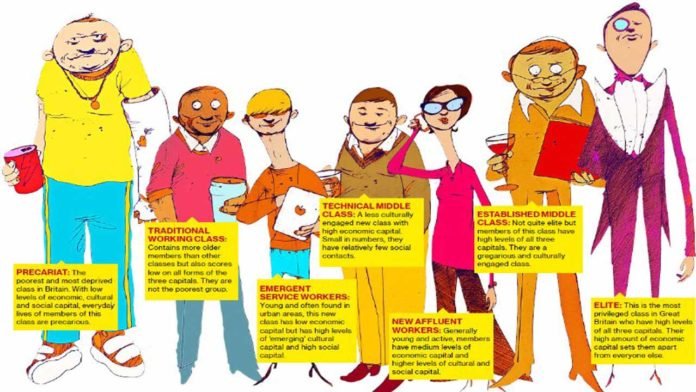 Britishers have undergone “genetic” transformation of sorts !!! Now they have been classified (probably ossified and fossilised too !) into seven orders of social classes by the British Class Survey 2013 involving 1,61,000 respondents by one cranky Prof. Mike Savage of London School Of Economics.
Let us examine one by one in brief and find out which class suits our tastes and preferences –

ELITE the most privileged one to boot, just 6% of the population, with savings of more than 1,40,000 Pound Sterling, extensive social contacts and education at top universities of the world, listen to Classical music and visit Opera Houses with paid or gifted tickets !!

ESTABLISHED MIDDLE CLASS high levels of all three capitals but not as high as Elite yet culturally extensively engaged (whatever that means !!), gregarious by nature, pursue traditional professions and socialise a lot.

TECHNICAL MIDDLE CLASS new, small class with high economic capital but less culturally engaged !! (Can you make out anything out of it ???) They prefer social media and socialise among themselves. A despot like me may prefer to call them ‘nerds’ or may be ‘duffers’ !!

NEW AFFLUENT WORKERS young and active with medium levels of economic but higher levels of cultural and social capital. They mostly belong to the bourgeois proletariat class in Marxist jargon !! They may be a bit argumentative too !!

TRADITIONAL WORKING CLASS low on all the three capitals, older on average than other classes, essentially conservative with occupations like truck-driver, plumber etc.

PRECARIAT OR PRECARIOUS PROLETARIAT most deprived group (in true tradition of the bizarre bourgeoisie !!) with low levels of all the three capitals, distinguished as largest beneficieries of State largesse.

Prof. Mike Savage should have named British Class Survey 2013 as British Savage Survey 2013 for the brutal savagery of British society that he has accomplished !! I am horrified to behold, I do not belong to any of these classes !! As a downright unauthorised / illegitimate intruder, I deserve to be thrown out lock, stock and barrel from a society I never ever dared to enter….They did the same during their monstrous occupation of Bharata, divided Bharatiya-s on multitudinous parameters, later perpetuated by Nehru-Gandhi-Vadra dynasty of Congress, plundered this nation to the last bit. They display plundered wealth including Kohinoor diamond most brazenly in their country. Brits have been a macabre society.

AND THEY ARE THE JESUS PUTRA-S PREACHING HIGHEST IDEALS / MORALS TO THE WORLD AND PROSELYTISING TOO IN THE NAME OF SOCIAL JUSTICE AND EQUALITY !!! By the way, their Missionaries had audaciously approached MK Gandhi several times to convert to Christianity and rebuffed by him in equal measure every time.