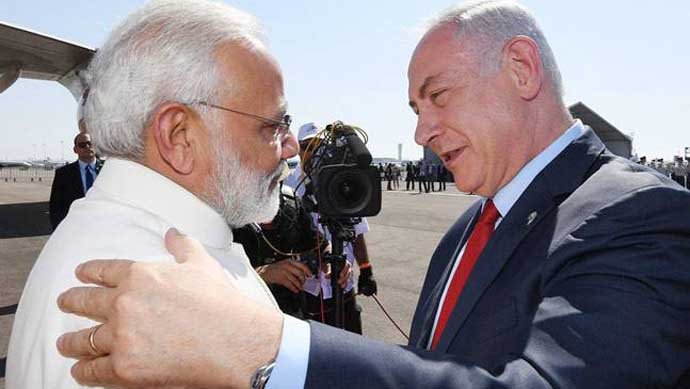 US President Donald Trump created history by declaring Jerusalem as the bonafide capital of Israel, a long pending decision transcending several US Presidencies and created another history by ordering US Embassy in Tel Aviv to shift to Jerusalem lock, stock and barrel immediately. And he created yet another history by displaying the order to world media so boldly and point-blank with a ‘take it or leave it’ message for the Arab world, Palestine included. Implicitly, he trashed ‘toothless white elephant’ known as United Nations though they struggled to salvage their pathetic image by passing a useless resolution against US President’s decision.

For some obscure strategic reasons, Prime Minister Modi of Bharata (British gifted name is India !!) decided to cold-shoulder Trump’s decision and ordered voting in favour of the Arab world. There was a howl of protest across the country and some even went to the extent of dubbing it as ‘stabbing’ in the back of Israel, that a long-awaited opportunity to do a historic course correction was frittered away and what not.

I too, decided to support PM Modi’s decision when lot many sent me messages to explain the decision as if it was adopted by me !! Our support for the ‘toothless’ UN decision was quickly rubbished when Palestinian envoy in Pakistan visited a proclaimed terrorist Hafiz Sayed to boost his morale, shared dais with the hardened criminal who had orchestrated mass Mumbai murders in 2008 killing scores of innocents including Jews, Americans and others. Though Government of Bharata have lodged strong protest with Palestinian Government but the irreparable damage has been done. Complaining to Palestinian Government on such issues is same as whining and complaining to Pakistan about cross-border terrorism / infiltration officially sponsored by Pakistani Government overtly and their heavily medalled / decorated (for which victory / victories ??) military beasts covertly.

Let us for a moment glance at this strange creation called Palestine and the ceaselessly sanguinary battles associated with them.

Hebrews had been in the territory now known as Israel, since BCE II Millennium beginning with King Joshua, then King David and his dynasty. “Israel” first appeared in Merneptah Stele of the Egyptian Pharaoh Merneptah of BCE 1209. Romans invaded it in CE-I, named the territory as Palestine where Aegeans, related to Greeks and not Arabs, inhabited a thin coastel Gaza strip (quite ironically, they are confined to that much even today !!).

The word ‘Palestine’ itself means ‘invader’ having it’s roots in the Hebrew word ‘Plisha’. So they were recognised as invaders by ancient Romans themselves !! So prior to Roman invasion, there was absolutely no entity known as Palestine or any cultural / historical identity associated with that, a stark reality confessed by even several Arab leaders and academicians categorically.

After contemporary Israel was founded in 1948, umpteenth times before literally, massive propaganda has been consistently and persistently unleashed with calories provided by the Arabian fossil fuel that Palestinian nationality preceded Israel 1948 and that Israelis are real invaders who snatched away their country. So Palestinians claim to own a property that never ever existed in their name at all and calling rightful owners ‘Occupiers’ !! Late Zuheir Muhsin, Defence Head of PLO himself vouchsafed, “Yes, the existence of a separate Palestinian identity serves only tactical purposes. The founding of a Palestinian state is a new tool in the continuing battle against Israel…”. What does it mean ? So much blood-bath since 1948 and before has been just a measure of ‘tactical tool’ ?? Human lives, human blood have no other value at all for them ?? If this is not a diabolical and beastly carnivorous conduct, then what is it in reality ?

After breakdown of Ottoman Empire post-World War I into three territories, 77% of the British occupied portion became Jordan and much less than 23% was allocated to Israel in 1948. In fact Britain cheated Israel by allocating less than their due share of 23% territory while Arabs of the truncated territory refused to migrate to Jordan so as to continue being a migraine to Israel. It was mainly the fossil fuel in possession of Arabs that rendered Jews dispensable in British eyes notwithstanding their historical rights, favours of all sorts extorted by British from them during World War-I, their calamitous history of horrific holocaust and commitments. Israel’s spread of a mere 21,000 sq. Kms. is just 0.01% of the surface area of Planet Earth. Planet Earth has 126 Christian countries, 49 Islamic countries perpetually killing one-another, 2 Hindu countries and just ONE country for Judaism !! Strangely enough, existence of even that one country is resented by 49 Islamic countries brazenly !! That is really height of mental bankruptcy to say the least.

Entire diplomatic might of more than hundred countries congregated in the name of UN General Assembly to browbeat a tiny country holding meagre 0.01% land-mass and the only country for Jews to live and die peacefully !! Are they all not crazy enough ? Unfortunately, UN has evolved into a ‘Theatre of the Absurd’, a bunch of clowns who entertain entire world through their absurd tactics and antics at the cost of billions of $$. Time is now ripe, if they refuse to be reformed, they should be disbanded forthwith because they do not mind being used and thrown away like tissue-paper by super-powers like USA on one hand and recalcitrant / defiant countries like China on the other.

For Jews, entire Jerusalem is a holy city while for Arabs, only Dome of the Rock and Al Aqsa mosque constructed on ruins of Jewish Soloman’s Temple are sacred. This temple was first destroyed in BCE 587, then CE 70 by Romans. Caliph Abdel Mallik raised the Dome in CE 692 after demolishing the temple and Al Aqsa Mosque close to the Dome in CE 714. As a matter of fact, Muslims are addicted to constructing their mosques over ruins of temples and churches all over the world. They have a flair of appropriating non-Islamic holy places on one pretext or the other and now they seriously wish to appropriate the whole world for their faith.

Jordan desecrated and destroyed all Jewish holy sites while Israel preserves all Muslim and Christian sites in Jerusalem accessible to all. Israel gracefully allows Arab Waqf to control Temple Mount while the same Arab Waqf does not allow Israelis to pray not in the Temple Mount but in front of it’s Western Wall !! Jerusalem was raised by King David as capital of Israel and remained so for 3000 years, Tanakh mentions Jerusalem over 600 times and Zion over 150 times, Bible mentions Jerusalem over 150 times and NOT EVEN ONCE in Koran !! Never in history not even for a single day was Jerusalem capital of any Muslim entity whatsoever. Very rightly Israel declared entire Jerusalem as their capital under Jerusalem Law and those countries who shift their Embassies to Jerusalem from Tel Aviv irrespective of the ridiculous UN votes, shall be celebrated for their statesmanship in decades / centuries to come. It is high time, all civilised countries in the world stand up in unison in support of Israel and Jerusalem as their capital. Dithering on the issue is reprehensible that amounts to nurturing unrighteous forces that are enemies of humanity and civilisation.

Prime Minister Modi must reconsider his decision and recognise Jerusalem as capital of Israel followed by shifting of Bharatiya Embassy to Jerusalem from Tel Aviv. As the Prime Minister has been downright righteous hitherto, possesses a flair of adopting righteous / absolutely correct decisions in spite of heavy odds, immediate reversal of the decision already adopted, is an imperative now. If any country in the world deserves unqualified support from us, it is none other than Israel.