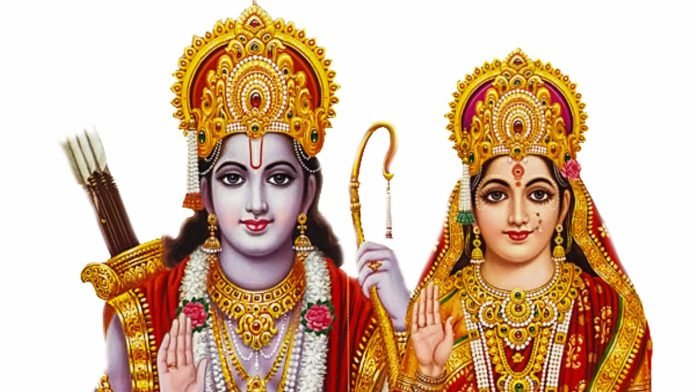 When Maharsi Valmiki  decided to author a historical epic to inspire everyone follow moral uprighteousness, he was advised by Muni Narada  to write about Sri Rama, greatest monarch, son of King Dasratha, born in Raghu  clan.

His contemporary Parasurama  happened to be Saktyavesa  incarnation i.e. possessing divine faculties of Visnu. There are otherwise 6 orders of Avatara-s as under –

Rama  name was prevalent even before incarnation of Rama. रम् – रमयते (Rama–Ramayate) means state of being engrossed in Ananda  i.e. Bliss.

Ramyate  is the origin of the name ‘Rama’ and Rama  is the one who is ever immersed in Ananda  and impels others to immerse in it. Ra  means rays of enlightenment which together with Rama, constitutes definition of complete and absolute existence.

Ramacandra  Rama’s original name is only ‘Rama’. He belongs to Surya  dynasty, born at 12 noon. As a child,  He once obstinately cried for the moon and that begot Him the name Ramacandra.

Sri Rama  ‘Sri’ is one of the virtues of Isvara  viz. success, energy, beauty, virtues, generosity, detachment, knowledge and opulence. When Rama  returned victorious to Ayodhya  with Sita  after slaying Ravana  and conquering Lanka  revealing that He was indeed Isvara  incarnate, He was called Sri Rama  by residents of Ayodhya. In Valmiki Ramayana, Rama  is referred to as Narapungava  i.e. Supreme Man and not as Isvara. Similarly, Hanumana  is referred to as Kapipungava  i.e. Supreme Vanara.

Sri Rama  as ideal son : Though Sri Rama  obeyed His parents, He also preached His elders. While departing for forest, He told His parents not to grieve for Him. After He returned after completing 14 years in exile, He offered obeisance to Ma Kaikeyi, very instigator of His exile and spoke to her adoringly as before.

Sri Rama  as ideal brother : Mutual love of Sri Rama  and Laksmana  is an ideal illustration of fratricidal love.

Sri Rama  as ideal husband : Sri Rama  had only one wife Sita  and He was entirely devoted to Her. Even after abandoning her under public indictment, Sri Rama  lived as an ascetic. While performing Yajna, He placed Her idol beside Him. He never thought about another wife despite that being a prevalent practice during those days.

Sri Rama  as an ideal King : He ruled over His Kingdom as a measure of Guru–Seva  i.e. service unto the Guru  as He offered entire Kingdom unto the holy feet of His Guru Vasistha. He believed, only Brahmana-s are entitled to rule over the earth surrounded by oceans. Thereafter, Sri Rama  ruled over His kingdom for 11,000 years on behalf of His Guru. That was precisely the reason why His rule became famous as Ram-Rajya, extremely prosperous resembling Satyayuga. He was very prompt in following Raja–Dharma  that anointed Him as an ideal monarch.

Sri Rama  as an ideal enemy : When Vibhisana  refused to perform last rites of his slain elder brother Ravana, Sri Rama  told him, “Enmity ceases with death. If you do not perform his last rites, I will. He is my brother too”.

He adhered to all norms of Dharma  and He was adored as Maryada Purusottama. He taught Dharma  too, to His subjects. Following His teachings, connection between Nivrattimargi-s i.e. those who ceased to participate in worldly affairs and Pravrattimargi-s i.e. those still active in worldly life, was never severed and it led to bliss for every person. He was complete incarnation of Dharma, rather Dharma  itself in His human manifest. Thus, Ramarajya  is regarded as ideal.

Sri Rama  was always true to His word. Once He uttered something, it was the Truth and there was no need for verification. No one ever asked Sri Rama, “Is this true ?”

Sri Rama  could strike any target with a single arrow in first attempt itself. He was the greatest marksman ever known.

Sri Rama  was generous to the core. When Sugriva  asked Sri Rama, “When Vibhisana  surrendered, you gifted the Kingdom of Lanka  to him. What will you do if Ravana  too surrenders ?” Sri Rama  replied, “I will gift him Ayodhya, then proceed to live in jungles alongwith my brothers.” He was ever Sthitiprajna  i.e. equanimous which revealed His highest order of spiritual advancement. Neither His coronation nor banishment to jungles ever perturbed Him a bit. However, He displayed emotions like human beings as He had assumed incarnation in human form albeit superficially. That established His greatness beyond any iota of doubt.

Rama-Rajya  refers to spiritual advancement of a very high order. Due to Sri Rama’s influence, every citizen of Ayodhya  was entirely Sattvika  like Him. It was literally a spell of Satyayuga  in His era and that led to complete absence of conflict, pain, agony throughout the Kingdom of Ayodhya. Thus, it was the influence of His being Sattvika  that transformed everyone in Ayodhya  into being Sattvika  that led to the legend of Rama–Rajya.

Rama Rajya  lasted for 11,000 years and in this Rajya, people were healthy, consecrated, contented and entirely peaceful. There were no evils, no wars, no natural calamities and no diseases. Sri Rama  ruled over entire earth without resorting to coercive force as all Kings submitted themselves unto Him. He was gifted a rare gem by Rsi Agastya  that blessed Him with powers of Indra, Varuna, Yama  and Kubera  and that strengthened Him to rule over extra-ordinarily. Bharata  conquered Gandharva-s on eastern front and ruled over that. Satrughna  slew Asura Lavana  and founded the city of Mathura.

As many as three hundred versions of Ramayana  are known to exist with the oldest version being the Samskrita  one attributed to Maharsi Valmiki. Ramayana  voyaged beyond our shores, then indigenised or translated in harmony with local cultural ethos. The epic expanded to many Asian countries like Burma, Indonesia, Cambodia, Laos, Philippines, Sri Lanka, Nepal, Thailand, Malaysia, Japan, Mongolia, Vietnam and China. An year long exhibition on ‘Ramayana  Revisited – Tale Of Love And Adventure’ at Peranakan Museum in Singapore ignited exploration of the role that the epic exerted as a cultural unifier, particularly for the Asian region.

Prominent versions of Ramayana  that have emerged outside Bharata are –

Phommachak in Kingdom of Lan Na.

In Laos, the epic is popular as Myongsing Ramayana, Phra Lak Phra Lam and Guay Duorahbi.

In Indonesia, the epic was composed in 10th century as Kakawin Ramayana  influencing Wayang Kulit, a puppet theatre group. Some variants include Arjuna Pramada  elaborating meeting of Sri Krisna, Arjuna  with Sri Rama  and Laksamana. According to the Pramada, Arjuna  shot an arrow towards Alengka  i.e. Lanka creating the bridge instantly.

Ramayana  is mentioned in Malay Peninsula as Hikayat Maharaja Wana  and Hikayat Seri Rama, composed in 16th century. In this variant, Wana i.e. Ravana  and Siti Dewi i.e. Sita  are biological father and daughter. Hanuman Kera Putih i.e. Hanumana  is depicted as son of Seri Rama i.e. Sri Rama, born to Him in his former life as Dewa Berembun i.e. Visnu. Malays also believe that Hanumana  constructed the causeway to Langkapuri i.e. Lanka single-handedly and managed to dissuade fish princess, Puteri Ikan from destroying it by marrying her. Interestingly, Hanumana‘s marriage with the mermaid is also mentioned in Thai and Khmer variants of the epic.

Ramakein i.e. Ramayana  in Thailand was composed in 1798 wherein abduction of Nang Sida i.e. Sita  by Thotsakan i.e. Ravana  is described as an act of love and his fall from grace is dubbed tragic.

Depiction of various episodes of Reamker i.e. Ramayana  in Cambodia on carved reliefs at Angkora Watt Temple, Banteay Srei and Baphuon during 10th century have been studied in detail.

Ramaenna or Ramaensho in Japan wherein character of Hanumana  was ignored. Suwa Engi No Koto by Koga Saburo Yorikata in 14th century is the version wherein youngest son is exiled by his brothers. Bontenkoku wherein Tamawaka i.e. Sri Rama, is a flute player who escapes with his abducted wife Himegini i.e. Sita  while her captor King Baramon i.e. Ravana  is away for hunting. Other Ramayana  derived stories in Japan including Kifune No Honji, Onzoshi Shimawatari and Bukkigun, have also demonstrated a deep convergence between the characters of Sri Rama and Ravana.

The epic also spread to Tibet and Mongolia through Buddhism with a variation that it was Bharata  and not Laksmana  who accompanies Sri Rama  in exile.

Events of Ramayana have been found painted in ancient Italian houses discovered in archaeological excavations. Painting depicting Kausalya, Kaikeyi  and Sumitra, queens of King Dasaratha  sharing divine fertility potion to beget illustrious sons has been identified. Sri Rama, Sita  and Laksmana  walking through jungles in that order described in Ramayana, is a scene existing in ancient Italian homes. Italian archaeologists are bewildered at the prospect of Hinduism being practised in Europe and Italy in that era.

Scholars like Nicholas Roerich in European Russia began to read Ramayana  during 19th century in Petersburg. He visited Ceylon with images of palaces and pagodas in his mind “But, after all, only in fragments do Colombo and Ceylon recall the ancient Lanka of Hanumana, Rama, Ravana  and other giants,” he wrote in his memoirs. The epic was translated into Russian in 1948 by Alexander Baranikov, an eminent Indologist.  It is now available in the country both as children’s Classic also in addition to complete text. Pechnikov’s Ramayana  too exists, authored by Natalia Guseva, an eminent Indologist. It was also recorded as a play. Russia’s Deputy Minister of Culture even proposed to film a movie on Ramayana  with mixed cast of actors.

Ramayana  is a grand epic of the Vedic  world and greatest cultural contribution to the world, imparts highly refined instruction in every aspect of life, in a way highest order of human conduct, having transcended religious and cultural boundaries. It is so righteously declared in Ramayana, “As long as rivers and mountains continue to exist in the world, saga of Ramayana  shall continue.”

It is ironical that the epic enjoys far wider acceptance across various countries in the world that drifted away from Hinduism centuries ago than the country of it’s origin and mandatory introduction into school syllabi is dubbed a “communal” act.