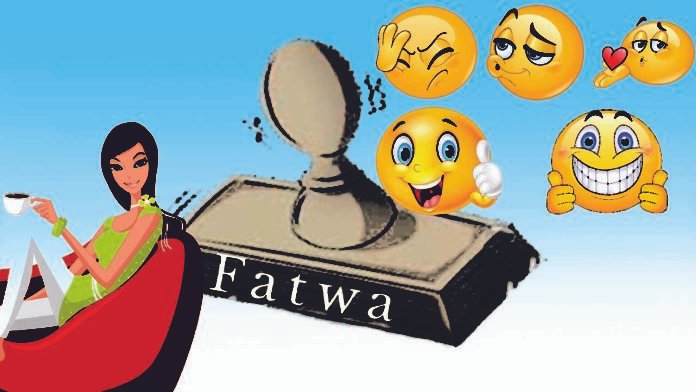 Sun Revolves Around The Earth

In a Fatwa titled “The Transmitted and Sensory Proofs of the Rotation of the Sun and Stillness of the Earth”, Saudi Arabian Grand Mufti Sheikh Ibn Baaz asserted, earth was flat and disc like and sun revolved around it. He insisted, satellite images to the contrary were nothing but a Western conspiracy against the Islamic world !!
Ref. Al-Ahram Weekly Issue 477, 13-19 April, 2000.

Kill For A Book None of Us Can, Should Read

In 1988, publication of Salman Rushdie’s novel “The Satanic Verses” led Iranian revolutionary leader Ayatollah Khomeini to issue a Fatwa against Rushdie with a huge bounty for his death triggering several attacks on the novel’s translators, publishers and booksellers including murder of Japanese translator Hitoshi Igarashi. Millions of Muslims around the world who had not read even a single sentence of the book, who had never ever met Rushdie, wished him death. Interestingly, 24% Iranians at that time were illiterate !!
Ref. “The West Is Choked by Fear”, Der Speigel Jan 4, 2010, Henryk Broder

Study conducted by University of Massachusetts reported, girls who play sports have higher self-esteem, less likely to enter or remain in abusive relationships. Kuala Lumpur had near riots when Sisters in Islam marched against a Malaysian Fatwa banning tomboys branding girls who acted ‘un-lady’ like violating Islamic tenets. Fortunately punishment for Malaysian girls in T-shirts and jeans has not yet been incorporated into Shariah so far !!

Bring Me The Head Of Mickey Mouse

Calling Mickey “one of Satan’s soldiers,” Sheikh Muhammad Al-Munajid, ex-diplomat at Saudi Embassy in Washington DC, decreed that household mice and their cartoon cousins must be “killed in all cases”, according to U.K.’s Daily Telegraph.
So did he remark on Majd TV after which he was requested to lecture on Islam’s teaching on mice !! Munajid also hit Jerry hard !! They could rent a secret flat with Salman Rushdie !!
Ref. Saudi Cleric Says Mickey Mouse ‘Must Die’.

According to Muslim Internet Forum Multaqa Ahl al Hadeeth, “Emoticons are forbidden because of its imitation to Allah’s creatures whether it is original or mixture or even deformed one and since the picture is the face and the face is what makes the real picture then emoticons which represent faces that express emotions then all that add up to make them Haram.”

Moreover, “A woman should not use these images when speaking to a man who is not her Mahram, because these faces are used to express how she is feeling, so it is as if she is smiling, laughing, acting shy and so on and a woman should not do that with a non-Mahram man. It is only permissible for a woman to speak to men in case of necessity so long as that is in a public chat room and not in private correspondence.”
Ref. Jihadwatch

As a government drive to eliminate frivolous Fatwa-s, Saudi newspaper Al Watan lampooned one real edict setting out new rules for soccer. Demands like “do not play with 11 people like heretics, Jews and Christians”, “play in your pyjamas or regular clothes because colored shorts and numbered T-shirts are not Muslim clothing”, “remove the crossbar in order not to imitate heretics and in order to be entirely distinct from the soccer system’s despotic international rules.”
Ref. “A Fatwa on Football”, The Guardian, Monday 31 October 2005.

No Nudity For Sex

In 2007, former Dean of Islamic Law at Al-Azhar University in Cairo issued a Fatwa declaring nudity during sexual intercourse invalidates marriage between husband and wife. Debates followed immediately. Suad Saleh, Head of Women’s Department of Al-Azhar’s Islamic Studies, pleaded for “anything that can bring spouses closer to each other” !! Therefore, Islamic scholar Abdel Muti concurred, “Nothing is prohibited during marital sex except of course, sodomy.”
Al-Azhar’s Fatwa Committee Chairman Abdullah Megawar too chipped in, “…married couples could see each other naked but should really cover up with a blanket during sex.”
Ref. SimplyDumb

In May 2007, Ezzat Attiya wondered how unrelated men and women could work together in the same office when Islam forbids unrelated men and women to be alone together. He suggested an astoundingly morbid solution – let woman breastfeed their male co-workers !! Now female workers shall be male worker’s foster mothers then they can be alone together anytime !! Attiya’s ruling was globally mocked and condemned on home front too. He was later suspended from job, pilloried in Arab newspapers before he issued a hasty retraction as “bad interpretation of a particular case.”
Ref. “A Fatwa Free-for-All In the Islamic World”, New York Times, Michael Slackman, Monday, June 11, 2007.

Do Not Watch Beckham

In 2015, a Saudi cleric issued a fatwa against women who watch football. The Cleric announced that women “do not care who wins the match, all they care about is watching the player’s thighs.”

In 2011, an Islamic cleric residing in Europe issued a Fatwa decreeing women shouldn’t get close to bananas or cucumbers in order to avoid sexual thoughts. A religious publication el-Senousa News declared, if women wished to eat cucumbers or bananas, it should be first sliced into pieces preferably by their husbands or fathers before they eat them. Egyptian site Bikya Masr reported the solution. According to the report, the Sheikh also added carrots and zucchini to the list of ‘immoral and blasphemous’ fruits and vegetables.

Having Sex Naked Equal To A Divorce

In 2006, Rashad Hassan Khalil, ex-Dean of Al-Azhar University’s Faculty of Shariah issued a decree that indulging in sexual intercourse while being naked invalidates marriage itself. He said, “being completely naked during the act of coitus annuls the marriage”.
Ref. http://www.smh.com.au/articles/2006/01/09/1136655112299.html

In 2016, Abdul Aziz bin Abdullah al-Sheikh, Saudi Arabia’s Mufti warned Muslim parents to “beware of this game.” He urged parents to prevent their children from playing Pokémon cards and games in order to “protect their religion and manners.”
He said the Pokemon possesses mind of children and it promotes vices of Zionism and gambling.
Ref. http://abcnews.go.com/International/story?id=81345&page=1

In 2014 ISIS issued a decree “banning” women from sitting on chairs. The Fatwa said by sitting on chairs, women may move the wrong way and get sexually aroused.
Ref. http://raymondibrahim.com/2014/01/11/why-islamists-ban-women-from-sitting-on-chairs/

Their Driving Has Always Been Under Suspicion

In 2013, Saudi Arabia’s Sheikh Lohaidan issued a Fatwa that women who drive risk damaging their ovaries and having children with clinical problems. “If a woman drives a car, not out of pure necessity, that could have negative physiological impact as functional and physiological medical studies show that it automatically affects ovaries and pushes pelvis upwards.”
Ref. http://www.bbc.com/news/world-middle-east-24323934

In 2005, a woman was raped by her father-in-law in UP. Instead of punishing him, Islamic court in Deoband issued a Fatwa, she would be his wife and her husband so far, her son owing to the act.
Ref. http://www.rediff.com/news/2005/jun/28up.htm

Even Chess is Un-Islamic

In 2016, Grand Mufti of Saudi Arabia sent shocked the world of chess by issuing a Fatwa, it is forbidden in Islam.
Ref. http://www.telegraph.co.uk/news/worldnews/middleeast/saudiarabia/12113324/Saudi-clerics-fatwa-against-chess-meets-with-stalemate.html

In 2016 Indonesian Ulema Council issued a Fatwa, people should respect Christians’ right to celebrate including wearing Santa hats but should not join because it is ‘Haraam’ i.e. not permitted in Islam.
Ref. http://metro.co.uk/2016/12/21/fatwa-issued-banning-muslims-from-wearing-santa-hats-6337520/

In 2014, Saudi Arabian Standing Committee of Council of Senior Scholars, Sheikh Saleh bin Abdullah Al-Fawzan declared, buffets offered at restaurants are Haraam. “One must not simply go to a restaurant that offers an all-you-can-eat meal for say SR 10 or SR 50 without mentioning any conditions…this is prohibited,” said Sheikh Fawzan.
Ref. http://riyadhconnect.wpengine.com/saudi-scholar-says-buffet-meals-are-haram/

And a few instances of ‘Home-grown’ Islamic talent –

Best ‘Purdah’ for a woman covers entire body including palms and adornments i.e. whole body is covered from head to toe. If it is possible to see through ‘Purdah’, then eyes should also be covered…
Ref. Fatwa : 1587/1330=L/1429

There are some Hadith that relate curse for women who adopt resemblance of men. Therefore, wearing clothes of men is not appropriate for women.
Ref. Fatwa : 771/730=B

Women can use perfume provided they are not passing by non-mahram in this state. Using aromatic perfume while going out of house, is not lawful. One should avoid using such perfumes which contain alcohol.
Ref. Fatwa : 604/L=212/tl=1431

It is unlawful and ‘Haraam’ for a woman to cut hair of her head even if for her husband. However she can dye other than black. The dye should not be heavy having layers which may prevent water to reach surface of hair. Imitating Western-styled women and adopting their resemblance in matters against Shariah is unlawful, even for husband.
Ref. Fatwa : 1347/1347=M/1430

It is not a desirable for women to go for office jobs as they shall encounter strange men (non-mahram) even though in veil. She will have to interact with others which is Fitna i.e. evil. A father is committed to provide maintenance to his daughter and a husband is asked to provide maintenance to his wife. So, there is no need for women to accept jobs that pose harm and mischief always.
Ref. Fatwa : 691/636=D/1429

It is unlawful for Muslim women to do job in Government or private institutions where men and women work together and women have to frankly talk to men without veil.
Ref. Fatwa : 577/381/L=1431

“Is it ‘Halaal’ to subscribe LIC policy ? Is it Shariah compliant ?” Intelligent Mufti responded : “LIC policy is unlawful due to being based on interest and gambling.”
Ref. Fatwa : 565/565/M=1431

“Can a Muslim take a job in bank or insurance company?” Renowned scholars provided their considered reply, “The job of writing and calculating interest based work in conventional banks and insurance companies is not lawful for Muslims.”
Ref. Fatwa : 466/466/M=1431

“Is it allowed in Islam to work as a life insurance agent?” Mufti Sahab replied sternly, “Life insurance contains interest as well as gambling and both these things are unlawful as per Quran and Hadith. Therefore, working as agent of life insurance is helping in sin, so it is prohibited by Shariah.”
Ref. Fatwa : 762/571=L/1430

Islamic seminary at Deoband in Uttar Pradesh is second largest seminary in the world after Cairo’s Al Azhar. These Fatwa-s are issued by Darul Uloom at Deoband. To be precise, by Darul Ifta. Department of Fatwa-s i.e. Darul Ifta was established in 1892, has so far issued more than seven lakh Fatwa-s in response to questions from all over the world. They benignly claim, Fatwa-s issued by Darul Uloom are held in “high esteem in and outside the country; even law courts in the country also honour them and consider them decisive in addition to masses”. The department is manned by men alone as women are not regarded to be brainy / learned enough to adjudicate ‘theological’ matters. They are mandated only to ask and abide by dictats issued by the herd of fearsome bearded men. Darul Ifta passes Fatwa on every aspect of human existence including whether to use razor to shave pubic hair !!! And that too, quite authentically.

Now the mind-boggling question arises from ashes, “What perpetuates such a phenomenon ?” And plethora of answers rather composite answer is as under –

Deliberately designed deprivation of right education,
Indoctrination of children in Madrassas with Stone-age / Desert Wisdom,
Women not allowed to rise,
Vice like grip of Clerics over the community,
Isolationism / separatism by constantly refusing reform measures.

These acts are gradually turning whole world against them which they tirelessly deny revelling in an imaginary world of their own creation.
Multi-trillion Saudi Dinar question is – Are they really aware of what the whole world talks about them or thinks of them ??