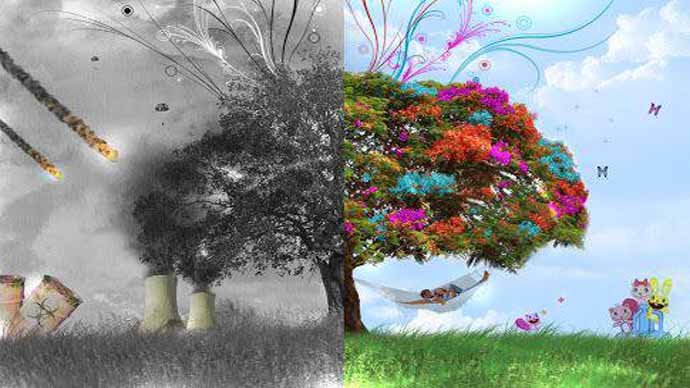 Nature acts with tremendous fury and force and it does not differentiate between a Hindu or a sikh or a Christian or a muslim.

Man appears to be just a powerless pawn in front of the nature’s fury.

People who have ever stuck in a storm or a flood or an avalanche would agree with me.

How have we forgotten the Tsunami, the Kedarnath floods which swept away thousands of pilgrims.

How have we forgotten that an entire civilisation the SARSWATI Civilisation that existed alongside the river Saraswati went missing and it has taken thousands of years to corroborate its existence. It happened because the River Sarswati dried up.

We Indians are sitting on an environmental disaster.

Our majority cities face acute water shortages during summers. The water table has gone down to more than 300 ft at number of places and at some places even at that depth water can not be found.

Many of our states have disputes over sharing of river waters with their neighbouring states because there is hardly any water flowing through them which can meet the requirements of the farmers and the growing population.

No TRIBUNAL has been able to find a solution to this emotional problem.

Our cities are getting polluted by the hundreds of old wretched trucks and vehicles of all sorts throwing out dangerous gases.

Our rivers have turned into dirty nullahs; go to vrindavan, Kanpur, Lucknow, Varanasi and see what have we done with our rivers.

We worshipped them in the name of religion ; GANGA HUMAARI MAATA HAI and threw every bloody junk into it.

The alarm signals are already visible if one wants to see or hear or sense.

The glaciers are melting at a very fast rate,
The temperatures are soaring.
The monsoons are depleting.

and if nothing is done on Today basis, we will Soon, see the fury of the nature.

As everyone is equal in front of nature its very essential that we stop questioning the decisions of Judiciary on the basis of religion, because that is the only agency which is left to bail us out.

We have as such demolished all other institutions and be sure the Politicians will never be able to do anything.

For instance Sri Sri’s event created lot of damage to the Yamuna bank which is already in a bad shape but when NGT raised this issue lot of Hindu organisations questioned the NGT decision and it was assured that the event is organised for pious reasons and rather all steps will be taken not to destroy the Yamuna bank.

But they caused the damage and are now paying a penalty of some Rs50 crores for incurring the damage. The question is will this 50 crore restore the damage done.

We need to understand that over indulgence on Rituals and practices have always damaged Hinduism.

Gautma Buddha, Mahavir, Guru Nanak and many other reformers who broke away from Hinduism propagated the uselessness of Rituals.

There is a very famous story associated with Gurunanakji.

Once Gurunanakji had gone to Haridwar. He saw lot of Pundits throwing water from Holy Gangaji towards East.

The pundits started laughing at him.

Gurunanakji asked them about the reason.

They said ; We are laughing at your stupidity for throwing water towards West. Water is always thrown towards East.

Gurunankji asked them inquisitively ; But WHY ARE YOU THROWING WATER TOWARDS EAST.

Pundits replied ; Because our ancestors are in heaven which is in East.

Gurunankji replied ; MY FIELDS ARE IN WEST thats why I am throwing water towards West.

Pundits laughingly said ; HOW WOULD YOUR WATER REACH YOUR FIELDS.
GURUNANKJI replied the manner in which your water is reaching your ancestors in East.

Lets not make Hinduism a religion of rituals. It has survived the invasions because of its Philosophy and not because of the rituals. The rituals have only shrunk it.