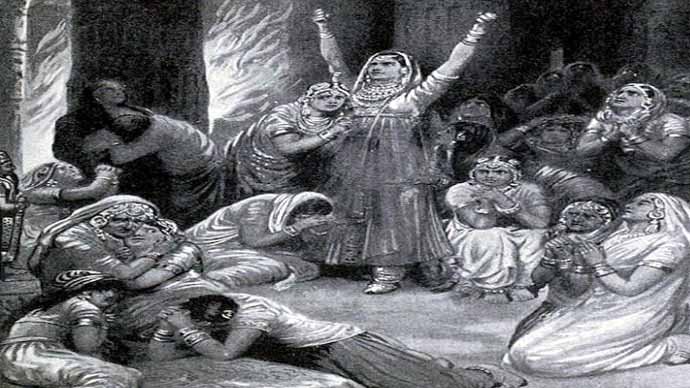 Scenario was terrible on Nov. 11, 1947 at Rajaouri in J&K. When entire country was busy celebrating Deepawali, residents of Rajaouri were fiercely fighting for their lives and honour against Muslim brutes bent upon killing all men and gang-raping all women. For several years thereafter, Hindus in Rajaouri did not celebrate Deepawali.

On one side were Muslim armed rebels of Maharaja’s Army, Muslims of the town and on the other side, unarmed Hindus who did not even know how to wield Lathis. Capt. Safi Daleer and Major Aslam of Maharaja’s Army revolted, were joined by Kabaili raiders from Pakistan and local Muslims. They sent a letter to local Rajouri Tahsildar Harzi Lal who had some 20 soldiers with him, to quit Rajouri along with all Hindu families or get butchered. Tahsildar eventually ran away after observing large number of invading Muslim brutes, left behind Hindus to fend for themselves.

On the night of Deepawali, Nov. 11, 1947, Safi / Aslam raided Rajaouri, captured all 7000 or so Hindu men fighting tooth and nail, brought them to a nearby ground and brutally killed them. Some 3500 women collected at a point, consumed poison, killed themselves instead of being brutalised by those invading Muslim beasts.

Safi and Aslam declared Rajouri as Pakistan territory which was later liberated by Bharatiya Sena on Baisakhi i.e. April 13, 1948.

A memorial has been raised in Rajouri at the spot of mass suicide committed by Kashmiri Hindu women to escape from Muslim beasts, known as Balidan Bhavan. Every year on the day of Deepawali, Rajouri locals solemnise Havan in memory of those martyrs.

Sheikh Abdullah had shamelessly created all sorts of hurdles to stop construction of Balidan Bhavan.