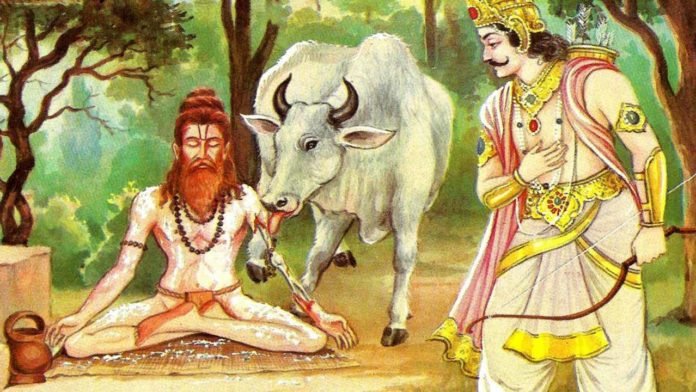 Dadhyanga is widely known and feted as Maharsi Dadhici among Hindu-s. Dadhyanga is a Samskritam word, conjunction of two words, Dadhya and Anca. Dadhici is a distorted version of Dadhyanga as mentioned by renowned ancient Samskritam scholar Panini in his title Astadhyayi.

Maharsi Dadhici is renowned for sacrificing his body to be used for developing a weapon Vajra with his bones so that Deva-s could be protected from onslaught of serpent King Viritra. With that weapon Vajra, Viritra could be slain and heaven occupied by them, reclaimed from them. Viritra was an embodiment of drought thus, Deva-s released water for all beings after he was slain.

In this nation of Rsi-s and Maharsi-s, with this sacrifice for the benevolence of all beings, Maharsi Dadhici became a legendary Rsi, revered for his selfless sacrifice. He was an ardent devotee of Bhagavana Siva who is supposed to have appeared before him as a Rsi on the auspicious festival of Mahasivaratri.

Bhagavana Siva had blessed him three boons, he would never be humiliated, could never be slain and his bones would be as hard as diamond. He had highest regard for Bhagavana Visnu too. When Deva-s approached Maharsi Dadhici for his bones in their battle against Vritra, he readily conceded learning that they had been directed by Bhagavana Visnu.

Maharsi Dadhici had mastered Brahmavidya, also known as Madhu Vidya to attain immortality. He was so proficient in this wisdom that even it concerned even Indra for his own security. There are several other legends too, associated with Maharsi Dadhici. He is said to be the first to leave Daksa’s Yajna where Bhagavana Siva had not been invited. Mantra for Hinglaja Devi is attributed to him to protect some Ksatriya children from being slain by Bhagavana Parasurama after hiding them them inside Hinglaja Mandira.

As narrated in Bhagavat Purana, Maharsi Dadhici’s father Rsi Atharvana had authored Atharvaveda. His mother Citi was daughter of Rsi Kardama. Maharsi Dadhici was married to Swarcha who bore a son Pippalada to him who evolved as Rsi Pippalada, authored Pippalada School of Darsana as well as Prsna Upanisad. Maharsi Dadhici established his Asrama in Namisaranya, near Lucknow as mentioned in almost all Purana-s. He had travelled to Ahmedabad and raised an Asrama on banks of Sabarmati river too. He has been mentioned in Ist Mandala of Rg Veda, Bhagavat Purana as well as Srimad Devi Bhagavatam. He also composed Narayana Kavacam, recited for power and peace. He is also associated with several Sanatana legends too. Dadhica Brahmana-s are purported to be descendents of Maharsi Dadhici settled in Rajasthan.

Maharsi Dadhici symbolizes, no sacrifice is too great to defend the defenceless from despots. He inspired Param Vir Chakra, Bharata’s highest military award for gallantry, most often posthumously awarded to soldiers with exceptional courage in war.

Legend of Maharsi Dadhici continues, rather growing variously in the manifest of voluntary donation of body organs. Organs of brain dead cadavers are harvested with due consent of their families and transplanted to patients who need them most to survive in the world. Mentally preparing a family already distressed and grieving demise of their dear ones, to accord their consent to donate organs when they require to be consoled most, is an agonising task accomplished with great fortitude and patience.

Several organisations have been active on this front which happens to be a humanitarian cause of immense significance. One such organisation renowned as Dadhichi Deh Dan Samiti, DDDS hereafter, have been rendering remarkable service to society by organising organ donations for those precariously struggling for life. Founded in 1997, DDDS have ensured 179 body donations, 526 pairs of eye donations, organ donations by four brain-dead patients, three bone-marrow donations and one case of skin donation. DDDS have on their records, over 8000 pledges of organ-body donations and the number is growing steadily.

When approximately 5,00,000 persons die every year for want of organ transplantation, very large ground is yet to be covered and the organisation is entirely dedicated to the noble cause. Wide gap between requirement and availability of organs is the main cause of organ trafficking. Organ trafficking and selling are proclaimed offences in Bharata as per the law. Organ donation for medical purposes is regulated by Transplantation Of Human Organs Act 1994 while whole body donation by Anatomy Act 1984.

Founder of DDDS Sri Alok Kumar of RSS, Delhi Pranta opines that time is ripe for the well-to-do class of people in society to volunteer themselves for the cause and undertake pledge to donate themselves whenever that is so possible. And volunteers of DDDS are assiduously inspiring people wherever possible, to open up for the humanistic mission. It is essential to carry out mass campaigns to encourage people to donate their organs. Response would certainly be encouraging as inclination to donate body and organs exists in every individual basking in glorious legacy of Maharsi Dadhici.