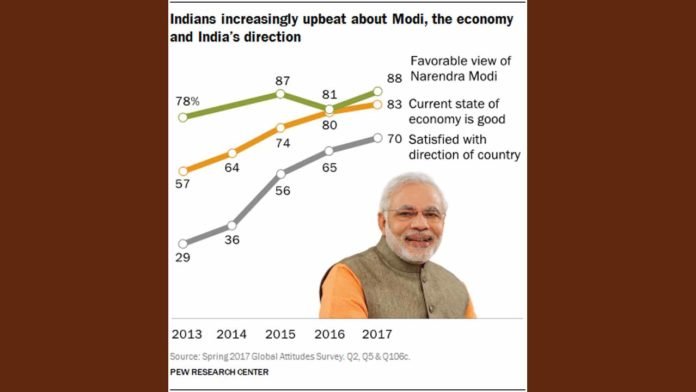 The recent Pew survey that showed Modiji’s popularity increasing to 80% was expectedly discussed in media but what one overlooked was its another report which said 53 percent of those surveyed in India expressed support for a military rule in India.

Pew has been conducting a global survey by the name of ‘Global Attitudes & Trends’ that focusses on different themes each year. In 2017, the Pew survey referred to a 38 nation survey about the support for democracy & its alternatives.

This figure is surprising considering that India is hailed as a great example of a democracy. Despite overwhelming support for democracy & its functioning in India, the survey also found 55 percent support for autocracy in India.

Why have we come to such a stage where the people have started thinking military rule, as an alternative, probably not realising that it can be very harsh and may be as corrupt as the current dispensation.

I think the major reasons for this shift are ;

One, People are getting fed up of unnecessary delays in decision making. For eg GST which was good for the nation but it took almost 10 years to go through the process. Initially despite being important the ruling govt did not take any action and then when we had the Govt which was serious it got stuck in parliamentary slugfest. Similarly the Bills like Benami property act, Bankruptcy code etc not being notified for years despite having passed by the parliament.

Two, The issues which are of national importance and of safety and security of the Nation are being unduly politicised and deliberately communalised. For eg Issue of Bangladeshi and Rohingya muslims illegal immigration, triple talaq issue which is primarily an issue of women rights.

Three, the institutions like Judiciary, Police, and Administration etc as a result are increasingly getting politicised, corrupt and ineffective and its impact is being felt by the common man. It basically works for the Politican and not the common man of the country.

Four, The people are getting fed up of Politicians, the lazy and politicised Beauraucracy, the corrupt Police and the Judiciary. More so it is frustrating when one finds that even the best of leader cannot do much and go beyond a certain extent about them because he himself is part of the system.

Five, Democracy is all about elections and voter, Hence it is inherently divisive in nature as the political parties due to their electoral compulsions treat different communities as their vote banks and so use every trick in the book to attract and divide the electorate. In this race to attract the voter the political parties cross all limits unmindful of economic burden on the state, peace and tranquillity in the society and even threat to the unity and integrity of the Nation.

This Survey Report is just one such Report and one may still not consider this as a trend but I strongly feel that if the Democracy continues to function in the manner it is, then, one may witness changes as we saw what had happened with the Communists world over.