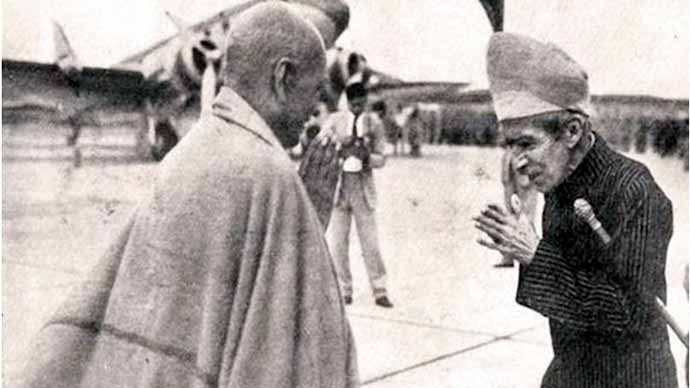 ‘Sir’ Mir Osman Ali Khan was Nizam-ul-Mulk of Hyderabad ‘Riyasat’ comprising of Telangana and some areas of Andhra Pradesh as well as Marathwada of today belonging to Asaf Jah dynasty founded in 1724.

Following decline of Mughals, Deccan witnessed rise of Maratha Empire and Nizam himself underwent several invasions by Marathas in 1720s, which resulted in Nizam paying Chauth i.e. a tax to Marathas.

Major battles fought between Marathas and Nizam included Palkhed, Bhopal, Rakshasbhuvan, Kharda and Nizams lost all of them. Following conquest of Deccan by Bajirao I and imposition of Chauth by him, Nizams remained a tributary of Marathas for all purposes. In 1805, after British victory in Anglo-Maratha battle II, Nizam of Hyderabad came under the protection of British East India Company. Last Nizam, Mir Osman Ali Khan Asif Jah VII, had 28 sons and 44 daughters.

Asaf Jah dynasty followed the Order of Precedence of male primogeniture regardless of the mother’s marital status or rank. During partition in 1947, Britain offered 565 states in the sub-continent options of remaining independent or acceding to either Bharata or Pakistan.

Qasim Razvi, a fanatic Muslim in Hyderabad, raised a private army known as Majlis-E-Ittehadul Muslimeen with members as Razakars in support of Nizam’s rule.This terror outfit later became AIMIM headed by Owaisis of Hyderabad. Hyderabad ‘Riyasat’ spread over entire Telugu speaking area in Deccan. In Nizam’s Hyderabad, 12% population of Muslims accounted for more than 90% higher positions in bureaucracy while police and military were dominated by Muslims to the extent of 95%.

Agitation for accession started in Hyderabad on August 7, 1947 and thousands of people carrying national tricolour were arrested. On August 15, Police lathi-charged, rained bullets, arrested scores of agitationists even as Razakars attacked them, snatched away and tore the national tricolour. Even Central Government offices were raided by Razakars who destroyed national tricolour which was later mercifully, condemned by JL Nehru in Constituent Assembly.

The agitation spread into villages and large number of village level Government officers resigned in protest. Thereupon, Razakars raided those villages that supported the agitation for accession, indulged in looting, arson, torture, murder and rape on a mass scale. In Bidar district of 1947-48 alone, 176 villages were raided, entire property of Hindu-s plundered, their houses burnt, 120 Hindu-s were brutally slaughtered and 150 women committed suicide that year due to rapes. While Bharata celebrated August 15, 1947 as Independence Day, Hyderabad continued reeling under a brutal, demoniacal regime of Nizam Mir Osman Ali Khan. It was only after Bharatiya Sena entered the scene, Hyderabad could be liberated on Sept. 17, 1948.

Urdu was the official language of the ‘Riyasat’ and compulsorily taught in ‘Riyasat’s’ schools. Schools used to officially encourage Muslim students and discourage Hindu children. Quite ironically, with Muslim population in the state being only 12 per cent, they accounted for 75% school students of Hyderabad in 1930.

On the other hand, Hindu-s who were 86 per cent of the population accounted for less than one third. Though rare, private schools with Marathi / Telugu / Kannada medium could be started only with special permission of Nizam’s Government. Majority of districts did not have even colleges and people used to cross over into British India for higher education from the ‘Riyasat’.

Local language and culture, Bharatiya nationalism and faiths were suppressed. Dhoti / Kurta / Vande Mataram were banned in Universities of the ‘Riyasat’. 1938 witnessed rustication of thousands of students for violating the ban imposed by Nizamshahi and they included ex-PM PV Narsimha Rao too.

Nizam’s regime was extremely ‘secular’ and ‘tolerant’ too !! Sikhs and Hindu-s were required to seek special permission to organise religious processions, renovate or construct temples and Gurudvaras while securing these permissions used to be hell of a task. Preaching Hinduism was strictly prohibited as ‘other faiths’ would feel offended. On the contrary, one so-called Professor presiding over Milad-un-Nabi could announce fearlessly, “I am pained to see inertness among Muslims when there still exist 22 crore of gobar-parast (dung worshipers)”.

The Deendar Siddiq started a majority-cleansing campaign to cleanse the ‘taint’ of Hinduism from Hyderabad in order to convert it into a satellite Pakistan. He explained the concept so well, “A bowl containing one-quarter of milk and three-quarters of dung cannot be called clean…. so long as it contains Kafiristan in it’s territory, it cannot be called Pakistan.” In 1932, he collected Rs. 5 lakhs and one-lakh volunteers to launch Jihad against Hindu shrines. Deendars continued to raid and brutalise Hindu-s hand in glove with Razakars. One Hindu officer reported that blood stained bundles of gold earrings, Mangal Sutra-s, and nose-rings were put under tables in his office by his staff and Razakars after raids to be shared next day.

In late thirties, campaign for Islamisation of Hyderabad was taken over by Bahadur Yar Jung of Majlis, converted 24,000 Hindu-s of backward classes in three years and raised support groups among Hindu-s led by so-called Ittehad depressed class leaders like Venkat Rao and Sham Sunder. He started 52 military training centres across the State for Razakars, raising their strength to 1,00,000 and became more vocal about his aims and ideology. In his “Weapons Week” speech, he declared, “Hyderabad is an Islamic State… Remember that there are four-and-a-half crore Muslims in the Dominion, looking to us to raise the banner of this Islamic State… Qoran is in one hand and the sword is in the other, let us march forward; cut our enemies to pieces; establish our Islamic supremacy… A Hindu who is a Kafir, a worshipper of stone and monkey (laughter), who drinks cow’s urine and eats cowdung in the name of religion (renewed laughter), and who is a barbarian in every sense of the word, wants to rule us! …They are not capable of ruling. That is the reason why they lost it to the Muslims. We are grandsons of Mahmood Ghaznavi and sons of Babar. When determined, we shall fly the Asif Jahi Flag on the Red Fort.”

Muslim Government employees were trained in arms, practised their skills on unarmed Hindu villagers. In Bhairavunipalli after raping the women and burning houses, 92 men were bound and lined up. A contest was conducted to find out how many men a 303 bullet could cut through. Standing tied villagers in a single file, an army man shot through four, a police officer through three. However, Dy. Collector of Bhongir Eqbal Hashim drilled through 8-10 Hindu-s with a single bullet and won the competition while survivors were shot dead with a stengun.

Killing with guns was regarded as mercy killing as there were other brutal methods employed too. In one case in Kodakandala, five Brahmana-s were hung from a tree and roasted alive. ‘Peace Committees’ were constituted of Hindu-s and Razakars to silence furore over atrocities on Hindu-s to ‘maintain’ communal harmony by accompanying Razakars on their savage raids to watch brutalities on Hindu-s as mute witnesses. MN Reddy, a Supervisor of Industries Department and S Gopalacharya, a Irrigation Supervisor took their jobs too seriously, blundered by reporting facts.

They were later taken to Jangaon Siddipet road and shot dead. Razakars brandishing arms would go around in lorries shouting slogans, proclaiming supremacy of Islam and Islamic sovereignty. One of the slogans they used to shout was, “Nizam ke kadmon pe Nehru ko jhuka denge; Patel, Munshi ko kabron me gad denge. (We shall force Nehru to bow at the feet of the Nizam; We shall bury Patel and Munshi in their graves.)” Zain Yar Khan who represented Hyderabad at Delhi was called a ‘Gaddar’ and marked for liquidation.

Shoebullah Khan, Editor of Imroze who ran a vigorous campaign exposing Razakar atrocites and official connivance, was killed near Kachiguda and his hands were chopped off. A large public meeting organised to mourn death of MK Gandhi at Nizam College was raided and dispersed by Razakars. In Nizamabad jail, officials assisted by Muslim inmates and Razakars attacked Hindu prisoners resulting in 123 casualties. Even KM Munshi, Agent General of Government of India, himself was a marked man, carrying a reward of Rs 5,000 put on his head by a Mulla in a neighbourhood Masjid.

So was the Nizamian terror, replete with brutal anti-humanity crimes, blood-bath and plunder. That was finally ended by Bharatiya Sena that marched into Hyderabad on Sept. 17, 1948 and Sept. 17 is celebrated as the Liberation Day of Hyderabad. It is very agonising and unfortunate that in spite of all those brutalities, anti-Hindu parties led by Congress continued ruling over Andhra Pradesh for decades as majority community continued voting them to power quite cheerfully !! Blessed with such suicidal tendencies and evanescent memory, Hindu-s are likely to undergo that inhuman savagery again and again in future.