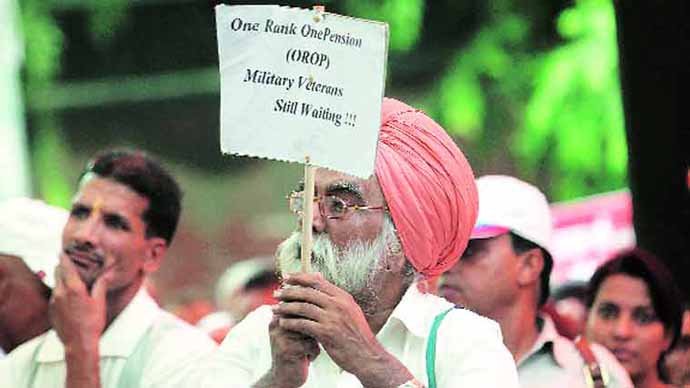 It has caused lot of anguish and disappointment amongst the veterans including me on the issue of treatment meted out to them at Jantarmantar.

It was sad that many of them were forcibly picked and shoved into the Police vehicle.

This entire incident leaves a bad taste and those who are resorting to this Dharna business are causing a great damage.

I would go sequentially to explain the reasons.

One, Many veterans who were not satisfied with the OROP announcement had decided to contest elections against the ruling Govt. As a result some formed their own parties and some joined Congress. They did everything possible to damage the image of the Govt Politically. Thus OROP became a Political issue and it is these few veterans like Gen Satbir who have made this a Political issue. Major Gen (retd) Satbir Singh, on 09 Jan17 a member of the Indian Ex-Servicemen Movement (IESM) said that “ex-servicemen will support the Congress in the forthcoming elections in all five states “ (times of india 09 Jan2017).

Two, So, once you have chosen a POLITICAL PATH it is quite obvious that the others also would treat you as Politician. More so when you resort to Dharnas at JANTARMANTAR which has been recently banned by NGT for any Dharna and issue such Political statements. This expectation and argument that they should be treated and held in great esteem despite behaving like a politician in the light of above is a clumsy argument.

Three, The veterans have to decide “Are They Politicians or They are Faujis”. There is nothing wrong in joining Political Parties but we need to remember people have a certain perception and an image in their minds of a Fauji and when they see Faujis behaving like Politicians doing Dharnas on a demand which has already been met to an extent of almost 95%, issuing Political statements then None is going to have any sympathy for their cause. Yes, some Delhiites can approach the Lutyens Gang to get media byte but that is not going to help their cause.

Four, Once you become a Politician and have associated with Political parties your response to various issues of National Importance tend to become Political and society as a whole is going to view us from that perspective for eg

ALPHA. What was Gen Satbir’s stand on the issue of ANTI INDIA slogans at JNU. Why did he then extended support to Congress and did not speak up.

Bravo, Why did they not oppose the leaders who had gone and met separatists in Kashmir

Charlie, Why did they keep quite when Maj Gogoi and Current Chief was called a GOONDA by Cong leaders. Did they speak a word against them. Why did he not as the Prseident of Ex servicemen association organised a Dharna to oppose this act of tarnishing the image of an ARMY CHIEF.

A famous quote for them ; DO NAON PE SAWAAR NAHIN HO SAKTE(You can not ride on two Boats).

Either behave like a Fauji or become a Politician who has no qualms of sitting on a Dharna on Road side and facing the outcome.

My view is that despite their call of supporting CONGRESS it made no difference to the electoral prospects of current Govt except in Punjab. BJP Govt has come to power in 4 States after that call by Gen Satbir.

So, How would a Political party which is in power view them ; LOSERS WHO ARE FRUSTRATED AND WISH TO TAKE A POLITICAL MILEAGE TO SAVE THEIR POLITICAL CAREER.

Govt Seems to have no idea of Soldier’s Role