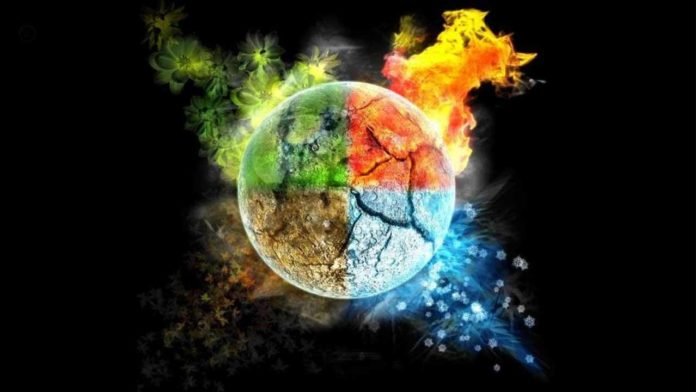 Akasa, Vayu, Agni, Jala and Prthvi. Five Mahabhuta-s are graded based on their respective subtlety with subtlest one being Akasa and the grossest one, Prithvi. Five Mahabhuta-s transform themselves in innumerable ways to cause creation of everything that we know, perceive and cognise in the entire universe. This mystical transformation is also accompanied by innumerable permutations and combinations among themselves to allow creation of innumerable objects. So Mahabhuta Tattva-s are mutable i.e. transformable yet Sanatana i.e. eternal.

Challenge is further compounded by the reality that innumerable Jivatma-s are born vying among themselves to gain a firm foot-hold in this cosmic jungle that we call the world. Complexity of the challenge is further aggravated when human beings are born, endowed with intellectual capabilities as well as venalities like aspiration to become Absolute Creator of the universe themselves !!

To ensure all Jivatma-s including human beings interact rationally among themselves as well as vis. a vis. creations of Mahabhuta Tattva-s and avoid even a semblance of cosmic disruption, Eternal Providence created a divine code of conduct renowned as Dharma, a catalogue of attributes that every Jivatma, particularly human beings must possess. Dharma is an institution in itself that has been defined by Maharsi Manu in his legendary wisdom of Manusmriti with absolute degree of precision –

Dhriti is patience towards all; Ksama is forgiveness; Dama is the virtue of restraining oneself from indulgence with evil deeds; Asteya is renouncing thievery and unrighteous acquisition; Sauca is internal and external consecration through purification; Indriya-Nigraha is restraining senses from gratification through introversion; Dhiha is abstaining from addictive intoxicants; Vidya is striving for Viveka-Jnana; Satya is truthfulness and finally Akrodha, renouncing anger towards all and everyone. All these are fundamentals of Dharma that members of all four Asrama-s and Varna-s are mandated to pursue religiously.

Now we behold, Dharma is Sanatana i.e. eternal and immutable. Dharma is absolutely incomparable and unique, endowed with the same mystical subtlety that Mahabhuta Tattva-s happen to be. Dharma is ubiquitous too i.e. omni-present and omni-existent. Dharma is essentially subtlest Jada yet when enacted, transforms itself into a glorious manifest of Cetana like Akasa and Prana. No other language in the world has an exactly precise counterpart of the term ‘Dharma’ hence the term is ‘un-translatable’ being an extra-ordinary institution. Whenever and wherever Jivatma is there, Dharma has to be there inevitably. Interestingly, it is only human beings who necessarily require to be taught and trained pursuit of Dharma as intellectual faculty they are endowed with, is a permanent rebel. Animals are natural and excellent followers of their Dharma in spite of not being trained or taught any lesson on Dharma at all. Indeed, when a man trains an animal to behave in a particular way, it is in reality Adharma i.e. complete absence of Dharma that is taught to them by human trainers !!! As an Adhyatmika enthusiast, I am inclined to declare Dharma as the sixth Mahabhuta after Akasa, Vayu, Agni, Jala and Prithvi.

If Dharma is Atma, religion is it’s embodiment. If Dharma is one of the means to attain the Supreme Absolute, religion is one of the means to practise Dharma. Jivatma is the sole purpose and objective of Dharma, which in turn is the sole purpose and objective of religion while religion can never be the purpose of Dharma. While Dharma is subservient to Jivatma in spite of the ruling that looms over head of every Jivatma, “Be you ever so high, Dharma is above you”, religion is subservient to Dharma directly and to Jivatma, indirectly. Just as Dharma has been defined in Manusmriti with absolute precision, religion too has been defined with absolute precision by Maharsi Patanjali. Just as there is ONLY one Dharma in the world i.e. Sanatana Dharma, there is ONLY ONE religion too i.e. Sanatana Pantha in the world. And this Sanatana Pantha is Astangayoga of Maharsi Patanjali –

First five elements of the Yoga are practised externally i.e. at gross, physical level while Dharana, Dhyana and Samadhi, internally at the subtle level of consciousness. When entire consciousness is transfixed on Dhyeya i.e. object of contemplation, it is known as the state of Dharana. Dhyana is the state of being completely assimilated into the Dhyeya with respect to consciousness excluding consciousness pertaining to any other entity. When cognition of the object as Dhyeya is completely dissolved and entire consciousness is transfixed on the conceptual existence of Dhyeya, it is the state of Samadhi. Dharana, Dhyana and Samadhi are together known as Samyama. By resolving Samyama on various entities, one is rendered capable of performing any miracle, even those that would appear impossible miracles otherwise.

This eight-fold endeavour intertwined with some elements of Sanatana Dharma, to attain ultimate liberation is complete and perfect in itself. It has taken care of all the possible repercussions and ramifications that one may encounter during it’s pursuit. The real marvel of Astangayoga lies in it’s complete and absolute objectivity, based on unedited and unadulterated cosmic realities. I venture to emphasise again, there is absolutely no trace of any subjective element whatsoever, in it’s entire philosophy. So much so that even a Muslim-fanatic may dub it as Allah Yoga or a diehard harvester of faith, Christian-Benedict as Christ / Jesus Yoga !!! If someone’s take happens to be that some Sufi fellow with the name Jalaluddin Rumi attained salvation by traversing the path of Islam, my rejoinder would be that even while practising five Namaz a day, Rumi could not have ignored elements of Astangayoga i.e. Yama, Niyama…etc. He had to practise these, even in the name of Islam !!! Ultimate salvation is altogether a different proposition which no other so-called religion can attain. Sole, existing religion of Astangayoga is a means to the highest state of consciousness. Even so-called most intelligent man of 20th century, Albert Einstein practised Astangayoga to open up innumerable locks in his brain whose keys were irretrievably lost into his ocean of ignorance. As entanglement with the gross world is multi-pronged and multifarious, equally capable and compatible spiritual regime is essential to combat the entanglement at the same level of strive. Mysticism of Astangayoga lies in it’s absolute neutrality towards all faiths because mere pursuit of faith adds to entanglement with the gross. Astangayoga is amply competent to dissolve the drag caused by pursuit of faiths. Owing to it’s absolute objectivity and pristine purity, Astangayoga is the Param Satya Yoga as well as Param Brahma Yoga, too.

A mountaineer intending to arrive at Mount Everest may come from any corner of the world yet he shall have to report at the Base-Camp before embarking on the heroism of summiteering. Cosmic journey from the base-camp to the summit constitutes Sanatana Pantha of Astangayoga wherein the base-camp is ‘Yama’ while the summit is ‘Samadhi’. Journeys from various corners of the world to the base-camp are indeed, life-styles i.e. Islam, Christianity, Judaism, so on and so forth. Indeed, other than the Sanatana Pantha of Astangayoga of Maharsi Patanjali being the only religion, Buddhism / Jainism / Islam / Christianity / Judaism / Bahaism etc. are mere life-styles. Hinduism is a complex entity of Sanatana Dharma, Sanatana Pantha as well as life-styles. If a Hindu conducts a Vedic Yajna with or without motives, at best it is a life-style which in no way can assure Adhyatmika advancement / refinement of any order. Ardent pursuit of even life-style Hinduism cannot attain salvation, leave alone Islam or Christianity. Rituals at best, discipline one’s life-style devoid of any Adhyatmika advancement. All observances, austerities etc. constitute Hindu way of life alone. Also, they do not at all assure attainment of Moksa i.e. ultimate liberation.

Wisdom lies in being resolute about observance of Sanatana Dharma and Sanatana Pantha. There is absolutely no wisdom in being resolute or fanatical about constituents of various life-styles. It is a human tragedy of monumental dimensions that majority of human beings are fanatical about life-styles in the name of Hinduism / Buddhism / Jainism / Christianity / Islam etc. which are not even religion at all not to speak of Dharma of any kind while being absolutely ignorant about cardinality of Sanatana Dharma and Sanatana Pantha.