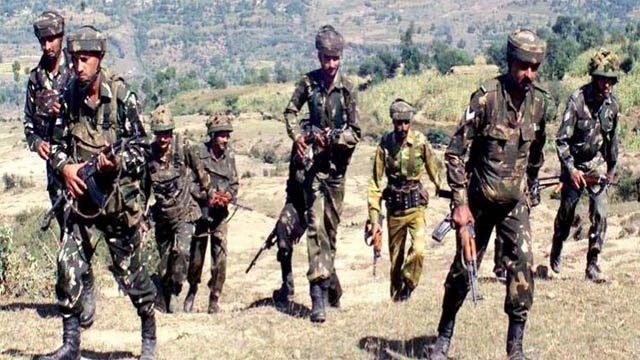 The manner in which various issues related to armed forces have been dealt with in the country by successive Govts in last 70 years and even now, its impact on armed forces can not be ruled out, particularly in an era when Social media is so powerful and has vast reach.

We must not underestimate the capabilities of Social media which is a double edged weapon..

What has happened in last three years and recently at JANTARMANTAR is an indication of what is likely to happen in future..

One, More and more Indian armed forces veterans will be Politicised and join political parties organise Dharnas etc to further their own vested political interests. Self aggrandisement and serve political interests of their own political parties in the guise of Jawans welfare. Unfortunately, National interest will have few takers. For eg many armed forces Officers and men found nothing wrong in the ANTI INDIA Slogans and Gulmehr statement and rather justified their actions. Many of them preferred to keep quite on the issue of DOKHLAM crisis.

The OROP has taken such a huge centre stage, (even after almost 90% of the demands have been met), as if that is the only major problem that a veteran has been facing. The problems related to ECHS( Medical facility) have never been brought up because it does not have impact on some. Recently a Jawan lost his mother because of the poor medical facilities provided to veterans. How many of us have bothered to find out. Even the organisation has not bothered to reply to his Complaint.

Two, The Politicians to save their back side will try and divide the armed forces veterans ; Jawans and Officers. Needless to say this can have disastrous consequences.

Three, The manner in which this Govt has used or intending to use armed forces to organise events, to build Foot bridges at RAILWAY STATIONS and it seems even for cleaning high altitude tourist areas even if that be with the help of Cantonment Board staff, It shows that the Govt has no idea of ARMED FORCES Role. And the SELF ESTEEM of a Soldier. They probably do not understand the difference between a SOLDIER and a Police man.

Four, The veterans will henceforth courtesy Social media and Politicisation will now be more assertive and in certain States may play an important role ELECTORALLY. Earlier we considered politics as an evil.

Five, Some kind of Political impact on the serving soldiers can not be ruled out in such a situation.

Six, All this may end up making them a tool in the hands of Politicians of different Political parties and we may lose respect in the society. They will be treated more often than not like they were treated recently at JANTARMANTAR by the Ruling party. May be in States like West Bengal or Kerala the treatment would be worse.

In view of the above, If some carefully thought out steps are not taken by the current Govt it may have an adverse impact on the armed forces. I think the Govt needs to look deeper into this subject of disgruntlement amongst the armed forces personals and veterans.

My suggestions are :
One, The huge amount of pensions has created a situation similar to MNREGA. The Govt has to forthwith think of compulsorily employing this human resource on retirement from armed forces. The soldiers need to be compulsorily employed till 60 years of age and It is not difficult to provide alternate employment in some other Govt sector. Do not leave this to IAS Lobby but rather Use some HR experts from corporate to work this out.

Right now at a very young age the Officers and men are leaving armed forces and are asked to fend for themselves. Did they do some mistake by opting for armed forces at a Young age. Many brilliant officers and men have to leave at a young age because the pyramid like Career structure leaves them high and dry when their counterparts in civil are having numerous career options at that age.

Two, The Pension must start only after a person attains the age of 60 and not at the age of 35. But that can happen only when the Govt employs him suitably till 60 years of age.

If the Govt is able to employ them suitably this problem of disgruntlement related to pay and perks can be resolved to a large extent and this would also avoid soldiers being exploited by Politicians for their own vested political purposes.