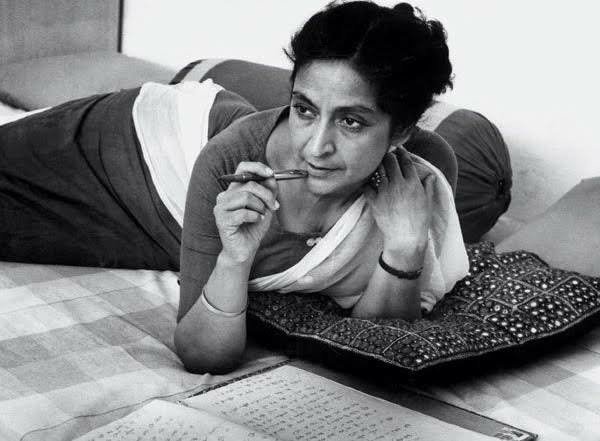 Amrita Pritam is considered the first prominent woman Punjabi poet, novelist, and essayist, and the leading 20th-century poet of the Punjabi language, who is equally loved on both sides of the India-Pakistan border.

With a career spanning over six decades, she produced over 100 books of poetry, fiction, biographies, essays, a collection of Punjabi folk songs and an autobiography that were translated into several Indian and foreign languages.

Her poetry is actually the reflection of her life, her knwoledge, perception, irrespective of physical and siritual experiences. and thus it makes herself as a complete Poem….

She is most remembered for her poignant poem, Ajj aakhaan Waris Shah nu, an elegy to the 18th-century Punjabi poet, an expression of her anguish over massacres during the partition of India.

As a novelist, her most noted work was Pinjar (The Cage) (1950), in which she created her memorable character, Puro, an epitome of violence against women, loss of humanity and ultimate surrender to existential fate; the novel was made into an award-winning film, Pinjar in 2003.

When the former British India was partitioned into the independent states of India and Pakistan in 1947, she migrated from Lahore, to India, though she remained equally popular in Pakistan throughout her life, as compared to her contemporaries like Mohan Singh and Shiv Kumar Batalvi.

Known as the most important voice for the women in Punjabi literature, in 1956, she became the first woman to win the Sahitya Akademi Award for her magnum opus, a long poem, Sunehade (Messages), later she received the Bharatiya Jnanpith, one of India’s highest literary awards, in 1982 for Kagaz Te Canvas.

The Padma Shri came her way in 1969 and finally, Padma Vibhushan, India’s second highest civilian award, in 2004, and in the same year she was honoured with India’s highest literary award, given by the Sahitya Akademi (India’s Academy of Letters), the Sahitya Akademi Fellowship given to the “immortals of literature” for lifetime achievement.

She died in her sleep on 31 October 2005 at the age of 86 in New Delhi, after a long illness. She was survived by her partner Imroz, daughter Kandlla, son Navraj Kwatra, daughter-in-law Alka, and her grandchildren, Taurus, Noor, Aman and Shilpi. Navraj Kwatra was killed in 2012.

In her career spanning over six decades, she penned 28 novels, 18 anthologies of prose, five short stories and 16 miscellaneous prose volumes.