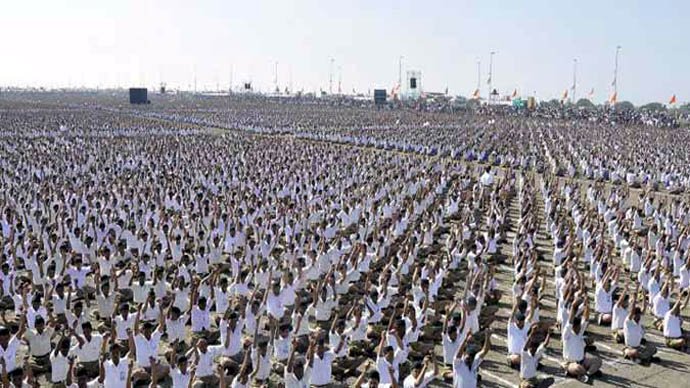 “Why is it that it is so difficult to unite Hindu-s?”

“Because every Hindu, either already has or struggling to have direct connection with Param Brahmatma through a dedicated hotline with a personalised / confidential password.”

“Oh, sounds strange. Is that the main reason why Hindu-s suffered, were looted and brutalised so inhumanly for centuries by Mughal despots / British Thugs / Missionary Thugs?”

“That’s really unfair. That was too severe and prolonged indeed.”

“What to do? Even after centuries of brutalisation by them, large section of Hindu-s still behave as if they did nothing to us!! Every effort to throw them out decisively was thwarted by traitors during those years. Devious theories are being propounded, every thing was goody goody and they are stupidly preparing themselves for another bout of all those savage brutalities.”

“Is that really possible? Has no Hindu opened his / her eyes wide shut ? Are they all Wholesale Idiots?”

”Not really. Repeat / relapse is impossible as RSS have been very active on this front since 1925. If there is a traitor at every nook and corner of the country, there is a patriotic Svayamsevaka too, at every nook and corner of the country to neutralise them effectively hiding behind veil. Internal borders are being guarded by them vigilantly. If nation is safe today, massive share of credit goes to RSS. This one is a historic freedom struggle largely unknown to the world. Humanity may never have witnessed such a battle before. Critical mass was attained long, long ago and now even Isvara is incapable of stalling / reversing that. Gradually, everybody will have to fall in line.”

“What did you say, internal borders? What is that? And freedom struggle, freedom from whom?”

“Internal borders are raised by anti-national elements. Borders of casteism, man-made poverty, corruption, bigotry, induced / forced conversion of faith, Naxalism, Maoism, Communism, Islamism, Congressism etc. And freedom from them, freedom from a slavish mind-set, from lack of self-esteem, absence of the sense of nationalism, patriotic fervour etc. constitute our occupiers and the liberation struggle is aimed at them.”

“So parochial!! Only Hindu-s? Is it meant for Hindu-s only?”

“Much more than that. There will be a day when RSS shall protect Christians against Islamic attacks and Muslims against Islamic fanatics!! RSS are inspiring Muslims to go for modern education… Right now, Hindu-s are the main focus of activity because they never had a sense of unity among them. Hindu-s do not know how to unite for a Hindu cause. It is a fantastic organisation indeed. It can be understood only by joining and not by observing from a distance.”

“Superb. Sounds like an organisation of celestial Deva-s!! Who founded it?”

“Indeed. Svayamsevaka-s are like angels. They just want, small amount of love and respect for the selfless services rendered by them on your call. Nothing more than that. It was founded by a very simple Hindu, born in an obscure family of Nagpur, studied in Kolikata to become a doctor, then declined to practise and incinerated himself in the crucible of service to nation. He was Dr. KB Hedgewar. He rose to become a far far greater visionary than even Swami Vivekananda… he was a very rare, shining bright piece of humanity whose organisation is now poised to set the whole world in right perspectives, in the right order…”

“I am dazed by this narration. Allow me sometime to assimilate it on my emotional plane of consciousness before I learn more about him. Till then, my best wishes for them.”