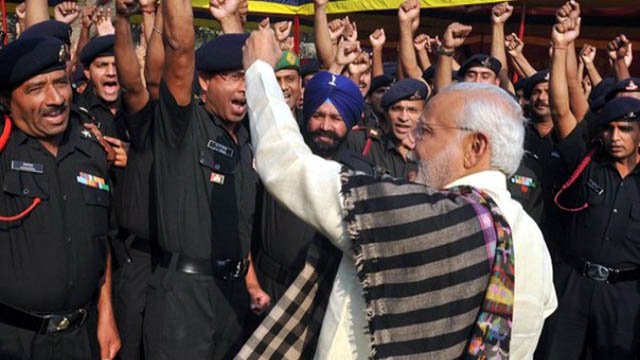 Pakistan Prime Minister Shahid Khaqan Abbasi on Thursday said that they have developed short-range nuclear weapons and were prepared to counter the Indian Army. He said this at the Council of Foreign Relations, a top American think-tank.

While listening to a debate on TV a former Indian diplomat said it is really surprising how could Pak PM use such a language at such a platform. But Pak is an irrational country. So it is acceptable.

Whereas, in our country when our Army Chief only says that “ Many terrorists are waiting in Pakistan to infilterate But we are waiting for them and will send them 2 ft down below” or praises Maj Gogoi he is called by names by our Political parties.

These are the same political parties whose members seek Pak’s help to oust Indian Govt, its President goes and meets Chinese Ambassador at the time of Doklam crisis, its members go and meet the separatists in Kashmir and demand that the Govt must talk to them at a time when Govt is taking stringent action against them.

It is not understood as why a National Party like Cong is behaving like a Regional Party from Kashmir.

I do not know whether they would ever be able to come to power by undertaking these kind actions, But not sounding to be alarmist, this is a very dangerous trend that the Cong is setting.

A soldier while on front fighting the enemy strongly believes that he is doing so for the Nation and the whole Nation is in support of his actions. This gives him a SENSE OF PRIDE for what he is doing.
But when he sees that every other day on TV and on social media his Actions, are being questioned by the Politicians and their CHAMCHAS, his confidence on the Nation gets shaken.

The IPKF fought in SRILANKA in late 80s when there was no Soical media and the electronic media was Govt controlled But even then the Soldier that time had felt that He is becoming a pawn in the hands of Politicians.

In these trying times when the soldier has easy access to SOCIAL MEDIA and the ELECTRONIC MEDIA as well which is not under Govt Control I very strongly feel that the Govt must in very very strong terms CONVEY to all Political Parties NOT TO DRAG ARMED FORCES INTO POLITICS.

And as far as we the common man concerned we must use all that is available with us to deny such elements any space on SOCIAL MEDIA.