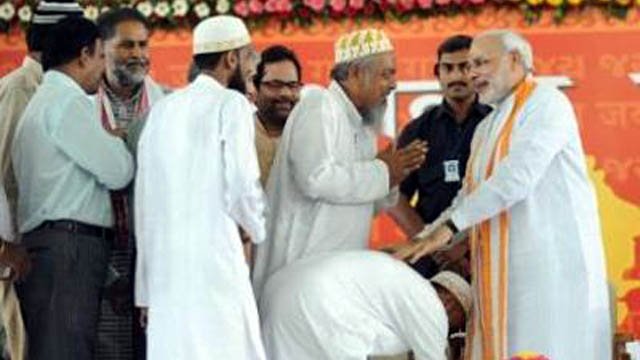 After the partition, the Muslims who stayed back in India were in a state of shock and found themselves in a dilemma due to the turn of events. They had voted for Muslim League on the issue of Creation of Pakistan hoping to be a part of it, But unexpectedly they got a moth eaten Pakistan and so they stayed back in India not because of their choice but by default.
Sardar Patel who is known for being blunt had many a times commented on this.

The rest of Indian population viewed them with mistrust and some with disdain.

So the outcome was, they were ghettoised, because that gave them some sense of security. The mistrust and dislike was so deep that many muslims in order to earn their bread decided to change their names ; Mohd Yusuf became Dilip Kumar and Begum Mumtaz Jehan Dehlavi became Madhubala. It took some time for the Indian Hindus to accept them as such and so gradually this practice stopped. But one can not deny that the Muslims suffered because of the Partition and what happened thereafter.

But probably as Hindus became more and more accommodative and the Political parties electoral compulsions led to appeasement of Muslims, the muslims are probably, once again at the same where they were during the pre independence and post Khilafat movement era ; stubborn, rigid, and utterly disdainful to Nationalistic sentiments and mood.

The excuse of Religion and Quran is being extended for anything and everything ranging from triple talaq to singing of national song to Love Jehad etc etc. The threats are being issued as they were issued by Jinnah and Suhrawardy in 1947.

Once again, in my Opinion, they are committing the same mistake which they did in 1945/46 when they Voted for Jinnah. They, when the opportunity is there, today to be part of India’s success story many of them once again, are deliberately making a wrong choice i.e. choosing to oppose the Change and preferring to be with those Forces who kept India poor and corrupt.

A mere glance at their comments on FB, Twitter and on TV on every national issue one would notice that THEY ARE BECOMING PRETTY PREDICTIBLE.

All this does not augur well for peace and tranquillity. I have deliberately not used the word UNITY of the country because of late it has been seen by them as an Obligation to be fulfilled by the rest of Indians and not they.

As India’s success story surges ahead, they would once again find themselves in an impasse ; Socially aloof and isolated. A perception is already building once again ; that they can not be trusted and are unwilling to change.

It is the result of Ghettoisation of last 70 years that Muslims have become the largest community, almost 54% as SELF EMPLOYED. Probably implying that many of them are unable to find a job for themselves. May be ; THE EMPLOYERS PREFER TO AVOID MUSLIM EMPLOYEES.

Whose fault is it ? What has led to this situation ?
Yes some blame can be passed on to the majority community and also the Political Parties but the major responsibility for this state of affairs has to be taken by the Community members, themselves, particularly those who have surged ahead.

Unfortunately, The educated and progressive Muslims also are playing a stereotype role and make no efforts to drive their community out of this vicious circle of rigid religious beliefs, poverty and violence.

Their silence on Tasleema Nasreen, Triple Talaq, Islamic Fundamentalism and their vocal support to anti national elements, Not in My Name and Intolerance campaigns adds fuel to fire and off course the mob lynching by the Cow RAKSHAKS also does not help a bit in improving the vitiated environment.

Every new revelation on ISIS, Al Quaeda, Taliban, Indian Mujahideen, Sleeper Cells, ISI supporters and a terror attack adds on to the already built Perception of ; mistrust, of suspicion, of hatred hatred, and would lead to more isolation, more seclusion, more ghettoisation and ultimately more suffering.

Its high time that the progressive Muslims take the Maulanas and the old stereotype Hamid Ansaris Head on and Hindus to be a bit more sensible and careful with the usage of words for their Muslim countrymen.

The nation has to think out of the Box to get its 17 crore Muslim population out of this vicious circle.