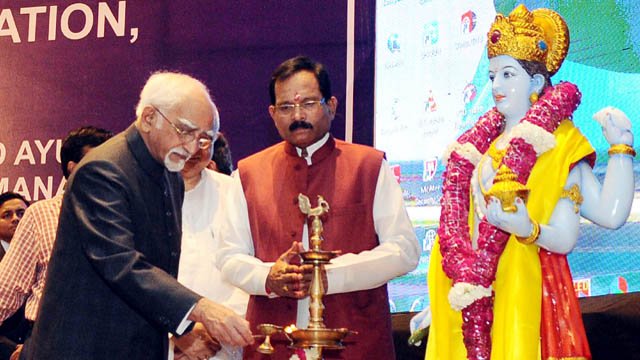 Outgoing Vice-President has puked venom out of his fanatic mouth on the eve of his departure right in presence of PM and FM.

44 Hindu-Idiots sent most dangerous traitor in history of the country to Rajya Sabha and the fanatic VP says, Muslims are a terrified lot.

Since advent of Mohammed, for the last 1400 years, they have been perpetrating all sorts of heinous crimes all over the world most defiantly, most shamelessly, most brazenly and Muslims are a terrified lot.

They brutally speared lakhs of children, outraged modesty of lakhs of women across the world and they are a terrified lot.

They destroyed thousands of monuments / temples / synagogues / churches across the world and Muslims are a terrified lot.

They are mass destroyers of culture / civilisation across the world and they are a terrified lot….

I would have roared on the floor of Rajya Sabha, “Mr. Chairman, do you believe, these brutalities have been committed by human beings all over the world for 1400 years ?”

Root-Cause Analysis of their predicament boils down to just one factor – Islam.

Muslim is always a Muslim.

He may be Ph.D in Robotics from MIT, MBA from Harvard Business School, Ph.D in Economics from LSE, super-specialist educated at AIIMS…but he is just a Muslim. And he remains a Muslim ever. Even if he is unanimously elected as President of the World, he is just a Muslim. He shall always behave like a Muslim.

Those who have been expecting something better from the outgoing VP, are dwelling in a dreamland that does not exist. I was not surprised at all. I expected it, even more than what all he uttered.