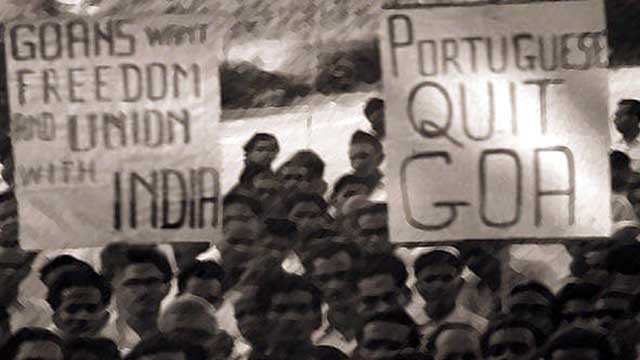 As a nation we have a poor sense of history and our eminent historians have contempt for the truth. But we must never forget the past — Goa Inquisition is part of our history.

“His Majesty the King has ordered that there shall be no Brahmana-s in his land and that they should be banished.”

“In the name of his Majesty, I order that no Hindu  can or shall perform marriages…”

“The marriages of the supplicants are superstitious acts or functions which include Hindu  rites and ceremonies as well as cult, adoration and prayers of Hindu  temples…”

Anybody familiar with the brutalisation of Hindu  customs, practices, faith and beliefs, rather entire Hindu  society, could ignorantly believe these excerpts have been taken from royal decrees issued during Muslim rule. The harshness with which suppression is prescribed in these decrees, callous disregard that is advocated for other’s sentiment, cruelty that is so volcanic in concept and action, suggest that these dictats could have been issued by one of the ‘Shadows of God’ who ruled this land, laying to waste Hindu  lives and temples in the name of faith.

But these are NOT extracts from Firman  issued by the Mughal court of, say, Alamgir Abul Muzaffar Muhi u’d-Din Mohammed Aurangzeb, popularly known as Emperor Aurangzeb. They have been excerpted from Firman  issued by the Portuguese who ruled Goa and recognised no religion other than Christianity as the legitimate means of communion with God. It was no secular rule that they imposed, but a ruthless system of pillage disguised as trade and a cruel administration for whom Hindu-s were nothing more than “supplicants” to be crushed into submission or exiled into oblivion.

Horrors inflicted on Galileo Galilei by the Inquisition — the Vatican has now admitted that the Church was wrong and Galileo was right — are well known. Not that well known, and tragically so, are the hideous crimes committed by the Goa Inquisition. Every child reads about Galileo’s trial and how it is symbolic of the triumph of science over faith. But there is no reference — indeed, all references are scrupulously avoided, most of it has been diligently erased from our collective memory by our eminent historians who have diligently sanitised past of it’s discomfiting facts — to the brutal attempts of Church to stamp out Hinduism  in the territories controlled by the Portuguese in India.

And this silence is not because there exists no evidence: these do exist, in full text, orders issued by the Portuguese Viceroy and the Governor. There exists, in written records and travelogues, penned not by the persecuted but by the persecutors, full details of the horrors perpetrated in the name of Christ, The Compassionate. Hindu-s who dared oppose the persecution were punished, swiftly and mercilessly. Those who were fortunate, got away with being banished. The less fortunate had their property seized and auctioned — their money was used in large measures, for furthering proselytisation. Least fortunate ones were forced to serve as slaves on the galleys that transported loot from Indian shores to Portuguese coffers.

Viceroy D Constantine de Braganca issued an order on April 2, 1560, instructing that Brahmana-s should be thrown out of Goa and other areas under Portuguese control. They had a month’s time to sell their property — it is obvious who gained from such distressed selling. Those found violating the Viceregal order, it was declared, would have their properties seized. Another order was issued, this time by Governor Antonio Morez Barreto, on February 7, 1575, decreeing that the estates of Brahmana-s whose “presence was prejudicial to Christianity” would be confiscated and used for “providing clothes to New Christians”.

Attitude of the Portuguese administrators in Bharata and the Church hardened over the years, to a point where each fiat, each decree, each order, each letter, became an instrument of religious persecution. Third Concilio Provincial — a gathering of Bishops and other clerics — met in 1585 to review, among other things, progress of converting ‘heathens’ to the ‘only faith’. The Concilio adopted a resolution which said, “His Majesty the King has on occasion ordered Viceroys and Governors of India that there should be no Brahmana-s in his lands, that they should be banished therefrom altogether with the physicians and other infidels who are prejudicial to Christianity, after taking opinion of the Archbishop and other religious authorities who have experience in the matter. As the orders of His Majesty in this regard have not been executed, great impediments in the way of conversion and the community of New Christians have followed and continue to follow.”

One can quote from many other orders, resolutions and instructions that resulted in the hideous Vatican-backed Goa Inquisition. Details are not unknown to most of us; they are definitely well known to the Vatican. The reason I have raised the issue of Goa Inquisition is two-fold. First, Pope Benedict XVI and other princes of the Church should bear in mind the horrors inflicted on Hindu-s in the name of Christianity before they allege intolerance towards Christians. Second, the Vatican owes an apology for the crimes committed during Goa Inquisition; it must apologise and repent for it’s misdeeds against Hindu-s and gross attempts to stamp out Hinduism. Not to do so would amount to continued endorsement of the crimes and the unfair practices of Missionaries that still continue unabated and unreformed.

Fifteen years ago, the Vatican issued a 14-page document, ‘apologising’ and ‘repenting’ for not doing enough to save Europe’s Jews from the Holocaust. While it is common knowledge that Pope Pius XII did not feel particularly appalled by Hitler’s ‘final solution’, the Vatican claimed in it’s 1998 document that he was unaware of concentration camps, mass slaughter, gas chambers and furnaces. The document understandably, failed to impress Jews who made it clear that Pope Benedict XVI was not welcome to visit Israel unless he offered an unqualified apology and made public documents of that period which are now stored in the Vatican’s archives. The Vatican may have eliminated the phrase “perfidious Jews” from it’s liturgy and Pope John Paul II may have made it fashionable for the Pontiff to refer to Jews as “older brothers”, these are seen as no more than meaningless, insincere gestures.

The purpose of securing an apology for the Goa Inquisition is not to belittle the Vatican, but to drive home the point that it cannot seek to occupy the moral high ground till such time it has apologised and atoned for the sins committed against Hindu-s, individually and collectively.

If the Vatican can say sorry to others, there is no reason why it cannot say sorry to Hindu-s. Their faith is no less or higher than those of the Book.