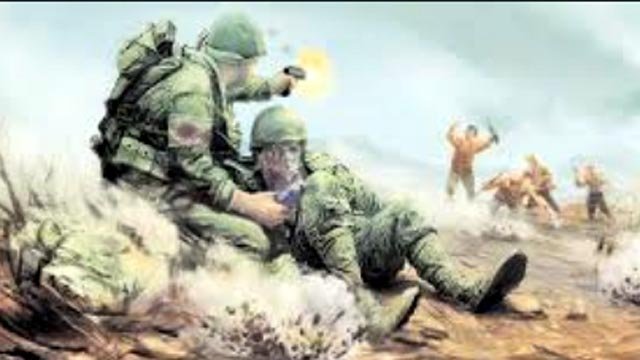 When the country is facing a threat on its borders and army chief talking of fighting on two and half fronts, all of a sudden we have some veterans talking about low morale of Army on social media.

Its not understood as to how they have come to this Conclusion and what indicators they have seen which I have missed.

Yes, there is a gap between the two armies as far as strength and equipment is concerned, Yes for last many years Armed forces have lagged behind as far as Modernistaion is concerned, Yes there are issues related to Command and Control structure. But these problems have always existed as far back as I remember.

I think veterans must refrain from playing petty politics when it comes to Nation and the armed forces, Even when the pay commissions have given us a raw deal. Because we have never got what we desired and there will always be a gap between the desire and the actual reality. The farmers and the poor are also not getting what they desire. And even those working in corporate do not get desired increments after slogging the whole year.

We got a raw deal in 4th and 5th pay commission but we still fought in Srilanka and Kargil and did well. So to say that Pay Commissions have an adverse impact on the morale is Grossly wrong. We fought at an average of one war every third year in 60s-70s decade and our seniors were not at all well paid, WERE THEY SHORT OF MORALE. And to link up morale with Pay commissions is questioning the very basis of our being in army.

Thirdly, Lets Look at Maj Gogoi’s action. It was an action taken by an Officer of an army which is High on Morale. Had the Officer had slightest of doubts in his mind that his superiors will not hold his hand and had low morale, He would have instead of taking on the responsibility would have palmed it off to his SUPERIORS ; SIR, AB KYA KAREN YEH CIVILIANS TO PATHAR PHENK RAHEN HAIN. Like many in civil do.

So, I feel that we must refrain from palming off our ( Veterans) low morale on to the entire Army.

Secondly, I also very strongly feel that we should not become a part of the Political bickering and convey a wrong message to the ENEMY.