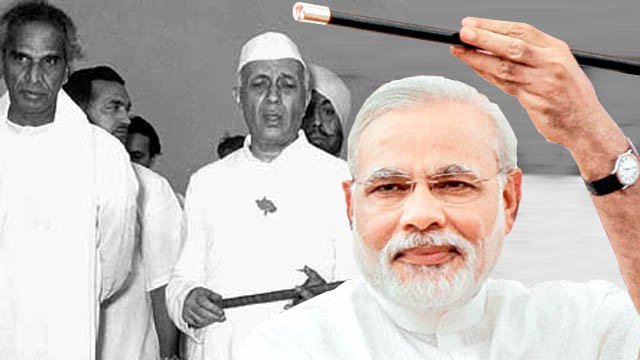 Zero-Tolerance Policy towards “Aggrieved-Persecuted Mindset Violence” is perfectly fine albeit 70 years late just as your remarkable / memorable visit to Israel has been !! I find so many initiatives / actions have been 70 years late as if country is afflicted by a “70-Years Late Syndrome” courtesy Nehru-Gandhi-Vadra dynasty !!

It is heartwarming to observe, all those who pick up guns to redress some of their imaginary grievances in Kashmir, are being promptly neutralized forever. The same policy should be followed in Naxal-CPM-TMC affected regions of the country too after deploying Central Security Forces as there is no other alternative at all. If must that be, let the subject of law & order be transferred to the Concurrent List of the Constitution or the crisis be considered as extra-ordinary involving national security issues. Senseless slaying of Amarnath pilgrims is reprehensible and highly / strongly condemnable. If some people / communities love blood-bath, they should be gifted lots and lots of blood-bath with their own blood as this one is a secular democratic country for them after all !!! It is a civil war like situation in Bengal, Kerala, J&K and integrity of the nation is being challenged consistently, persistently and most audaciously now, Mr. Prime Minister. Until and unless Jinnah’s DNA is fossilized deep in the ground, notorious demon-land of Pakistan is shattered into pieces, Kashmir shall never rest in peace.

After your highly successful visit to Israel, will you kindly order compulsory military service for youths for at least 2 years before they are allowed to chose their professions ? I mean conscription, Mr. Prime Minister.

Placing stone on the grave of Austro-Hungarian journalist Theodor Herzl, founder of Zionism, marked formal epilogue of Nehruvian Non-Alignment, last nail in the coffin of “Kiss Yasser Arafat Policy of Palestine-Pakistan Appeasement’. It was a historic moment for which dreamers of national renaissance had waited for 70 long years. Coolly and quietly, you have added a fantastic chapter to nation’s history capable of immortalizing you forever. Well done, Mr. Prime Minister. Kudos to you.

After placing the historic stone on the famous grave, may I expect you to demolish notorious graves known as Raj Ghat / Vijay Ghat / Shantivana / Kisan Ghat / Samata Sthala… and declare entire land so released earmarked for reserved forests as green lung for the highly polluted national capital, all Murdaa-Ghats scattered in Lutyens Delhi in the name of Mazars / Maqbaras / Kabra / memorials, some 200 or so, demolished and land seized… may I expect you to declare Teen Murti Bhavan as permanent official residence of Prime Minister after bullock-carting all ‘Chacha’ Nehru’s belongings to 10 Janpath if 10 Downing Street, London refuses to accept all that in spite of Edwina Mountbatten connection, Gateway of India be declared as Bharata Dwara……?

Decades ago, when I had visited Teen Murti Bhavan, my first and last, well-appointed ‘Chacha’ Nehru’s bedroom was quite prominently displayed !! How long these absurdities / colonial shame shall be tolerated Mr. Prime Minister ?? Nehru-Gandhi-Vadra dynasty converted Delhi into a Murdaa City by allowing so many Murdaa-Ghats / Maqbaras / Mazars to come up defiantly all over.

The kind of savage holocaust that occurred in 1947 caused by ‘Chacha’ Nehru, The Prime Culprit, he would have been promptly beheaded in no time in any other country. It was only Hindu-Timidity that saved his life and allowed him to remain PM for 17 long years, Mr. Prime Minister. With Hindu-Rate of Growth now consigned into dustbin of history by your Government, Hindu-Timidity ingrained into our psyche by the dynasty, is yet another issue before all of us to contend with, in immediate future.