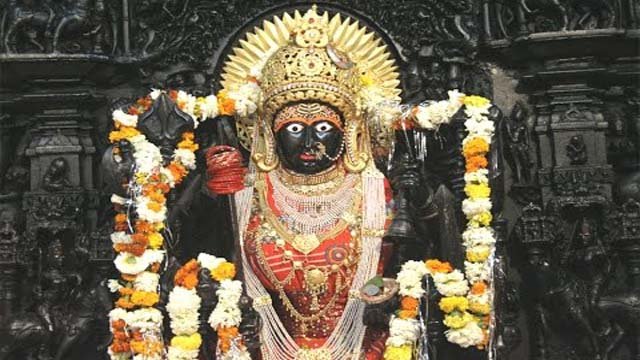 “Tripura Sundari at the temple situated in the ancient Udaipur near Agartala. Tripura Sundari is called as Turtia Mata by the local people. Considered to be one of the 51 Shakti Peethas, it consists of a square type sanctum of a typical Bengali hut. It is believed that Sati’s right foot fell here during Lord Shiva’s Tandav Dance.

The temple consist a square type sanctum with a conical dome was constructed by Maharaja Dhanya Manikya Debbarma in 1501. There are two identical images of the same deity inside the temple. They are known as Tripura Sundari (5 feet high) and Chhotima (2 feet high). The Goddess with eighteen arms is seen inside the sanctum on a lion statue. The idol is made of reddish black Kastic pathar. Shri Yantra (the symbol of Hindu tantra) is built at her feet.

Tripura Sundari is so called because she is seen in her three different forms such as that of a lion, peacock and seated on a lotus, and appears as Kumarika, a young girl in the morning; as an attractive young- maid in the mid-day, and an adult woman in the evening. The backdrop of the main shrine is carved with the winter images of the nine Durgas. There are also shrines dedicated to Hanuman which is seen at the entrance and Neeelkanth Mahadev at the backside. The Kalyan Sagar Lake in the eastern side of the temple adds to its beauty. Every year on Diwali, a famous Mela takes place near the temple which is visited by more than two lakhs pilgrims.

Legend has it that king Dhanyamanikya who ruled Tripura in the closing years of the 15th century, had a revelation one night in his dream, ordering him to install Goddess Tripura Sundari in the temple that stood on a hilltop near the town of Udaipur. The temple was already dedicated to Lord Vishnu, and the king was confounded initially, unable to decide how a temple dedicated to Vishnu could have an idol of the consort of Shiva. However, the oracle repeated the divine injunction to the king once again the following night, thereafter the ruler decided to obey the ethereal command, notwithstanding the fact that Vishnu and Shiva typified two different sects of religious following. Thus, the Tripura Sundari temple came into being in around the year 1501, and is now about 515 years old. This legend is recounted as one of the example of how solidarity between the two sub groups, the Vaishnava and Shaiva sects, was known and fostered even during medieval times.

The structure of the shrine resembles that of a tortoise, with a roof shaped like the humped back of a tortoise. For this reason, the shrine is also known as “Koorma Peetha” (Koorma meaning Tortoise). As in other shrines, stalls along the approach road sell flowers and baskets of offerings that visitors can buy and take up to be offered to Tripura Sundari and returned as Prasadam. A specialty here is the sweet, brown, condensed milk Pedas that devotees carry back from the temple, to be distributed among family and friends back home. The red hibiscus flower is also prized as an offering”.

(Notes: (a) Sati’s left foot fell at the Kurukshetra Smashana Bhoomi and a commemorative left leg is installed there opposite the temple comemorating the Yajna that Krishna made the Pandavas perform as Prayshcitha for Pithru and Bhrathru Hathya. (b) In mythology, Tripurasundari (Maya or Lalitha) is the elder sister of Narayana (as Brahma Maya preceded Mitra, Varuna, Arayama and Mitra’s creation of the various suns, the light of Surya, Savita, giving rise to the three gunas of Virinchi, Narayana and Shankara. The Bhagavatham mentions how Maya escaped from Kamsa’s grasp when he was trying to dash her head on the washing stone predicting the coming of her younger brother Krishna from the same (Devaki’s) womb ).