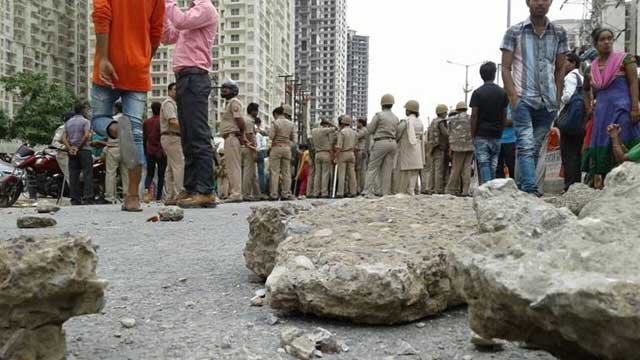 “5 different sounds for the letter j! Well, that sounds interesting”, she said, “does that make a lot of difference?”

“of course it does, you can make or kill a meaning through the pronunciation.”, he responded, “Besides the knowledge makes you feel enlightened just like Buddha”

“Well ! to tell you the truth I suddenly realized, it’s not ‘Buda’ the way you speak, actually it is pronounced ‘Buddh’ or for that matter ‘Raam’, ‘Krishn’ but then there’s no system to pronounce d or t the way Indians do.”

“It’s just about the difference in cultures, Majhab-Religion asserts itself by forcing others to follow their traditions. Somehow ‘Dharm’ which tries to accommodate everyone ends up being pushed against the wall. Like you respect ‘halal’ or five sounds of j, but you will ask why it matters in the case of ‘Buda’ or ‘Rama’ just because we never asserted.”

Yes, the gated communities in Indian Metros stand terrified. Terrified of the ‘help’ they hire for household chores. They suddenly find them out-castes, just like the members of a residential community in Noida’s Sector 78. Suddenly their homes which were bought after n number of sacrifices, on EMIs which virtually rendered them slaves aren’t just vertical flats anymore. They are apartments, which supposedly gave them ‘privacy’, but suddenly showcased what they actually are – they make a society grow apart. The mob was nothing new for NCR, Dr. Narang saw what it meant, and more recently the E-Rikshaw driver Ravindra had to face the wrath.

What the colonies were not ready to accept was the fact that they stand alone against the mob. Not just when the mob attacks, the aftermath is equally traumatic. They not only destroyed their homes they also took away their side of the story. The maid suddenly has ‘papers’ needed for citizenship. In a very recent event in Assam when the judge deported some illegal immigrants, he had to face the wrath of their lawyers. Much like those who insisted that he mob of ‘jhuggi’ was correct in attacking when the judge deported illegal immigrants he was attacked right in the court room by their advocates. The advocates of the mob now say they were very much correct in attacking, the rich, the so called superiors.

This is happening in a country where illegal immigrants and political agents arranging voter card and other documents for them is an open secret. Encroachment no longer remains a crime, you are being asked to treat criminals as your equals. But why just equals? you should also pay for their civic amenities. Now paying little more taxes for illegal immigrants won’t hurt that much, you already pay hefty EMIs, don’t you? This happens when your CCTV cameras clearly recorded the theft. Gangs would insist stealing a few thousand from rich is not a crime for the ‘poor’, outside the gate immigrants.

The elite channels you watch insisted that Bengal violence was nothing but the anger of a specific community being vented out, while you nodded intellectually. Now they insist that the mob attack on your ‘gated housing society’ was the fury of the downtrodden against the rich-elite. You may now choose to realize that there’s a difference between being liberal and being a doormat. You may now question if the intellectuals you vehemently supported were actually correct. You may now think if the school level civics definition of the man being a social animal was more correct, or being cut off from your society in the name of individuality and privacy advocated via the stiff upper lip and a foreign accent was beneficial?

It’s time when a few choices need to be made. You will have to choose between being dependent on unverified help, against being self-reliant on tools like vacuum cleaners, dishwashers, and washing machines. The household chores need to be re-allocated when both husband and wife are working. You need to think again how the community in housing societies can get together. Whether the children need to be sent to fancy summer camps, or should you insist on daily lessons and practice in self-defense is to be sorted out. Between so many tough decisions and not so welcome discussions, there’s, of course, the easy way out. You may wait till the mob visits you. After all Dr. Narang waited, didn’t he?