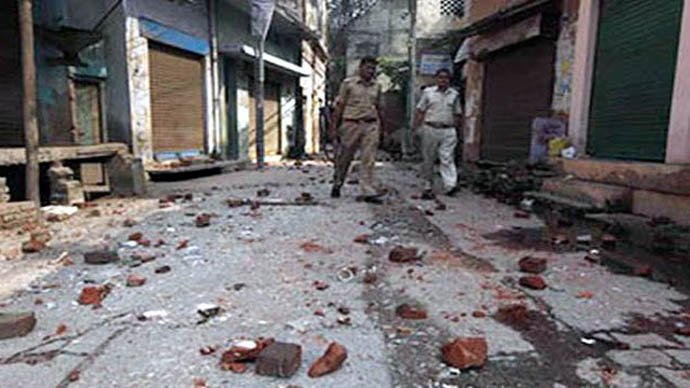 “Where the mind is without fear and the head is held high
Where knowledge is free
Where the world has not been broken up into fragments
By narrow domestic walls
Where words come out from the depth of truth
Where tireless striving stretches its arms towards perfection
Where the clear stream of reason has not lost its way
Into the dreary desert sand of dead habit
Where the mind is led forward by thee
Into ever-widening thought and action
Into that heaven of freedom, my Father, let my country awake.”

So retorts Ramakant Tiwari, lamenting in utter despair and disgust –

“Where mind is full of fear, head droops in despair,
Where knowledge is trashed in bin,
Where life is shattered into sobs and fragments,
By ever-flowing rivers of blood,
Where cries of agony echo from depth of miseries,
Where tireless bigot politicians strive to loot and destroy,
Where stream of reason, now an overflowing gutter,
Into the dreary desert sand of fierce riots and butchery,
Where mind is led downward by scallywags,
Into ever-narrowing cauldrons of hell-fire,
From that Hell of Bigotry, my Father, let me escape.”

Bengal is burning and flames are leaping high above into space. “Robindro Shongeet” drowns desperate wails of help and “Rashogollas” sweeten mouth of every rapist. “Poribortan” Begum has turned out to be a devilish despot now eligible to be arrested under National Security Act and imprisoned for life.

From 1999 to 2002, Shutia in North 24 Paraganas, hardly 60 Kms. away from Kolikata, Sushanta Chowdhary and his gang members unleashed mass rapes and sexual toture of any and every woman they came across anywhere, under protection of Jyoti Basu Government. Nobody dared to file even FIR and mass-rape of all women / girls continued for 3 years. When one young school teacher Barun Biswas finally mustered courage to stand up, action or a semblance of it, was indeed undertaken though Barun Biswas was duly gunned down later. By the way, Bengal is dotted with Shutia-s.

Let us go deeper into past. If I correctly remember, it was 1974 when the jam-packed Rabindra Sarovar auditorium in Kolikata holding a cultural programme, was raided and ran-sacked by Leftist butchers. The orgy continued for hours and next morning, heaps of ladies clothes, torn to tatters, were discovered by people all around. It came to be notorious as ‘Rabindra Sarovar Kaand’ later. Nobody knows what action was taken later, whether even FIR was filed at all. Will anyone believe, Bengal has been a land of Caitanya Mahaprabhu, Swami Vivekananda, patriots like Dr. SP Mukherjee who sacrificed his life for the sake of nation’s integrity  ??

And do you know whom he blamed? Will you be able to believe that ? Bengalis !!!!

Thus he described poetically as under –

“None worshipped Radha-Krishna, filled are they with sin,
Day and night they pleased themselves with other’s women,
All time was spent in lusting and abuse,
No one knew what might happen at any excuse,
Avarice and greed all day and night,
There was no other thought in anybody’s mind,
So great was the burden of sin on Earth,
No longer could she bear such a weight on her girth.”

So Bhadraloka-lunacy / Hilsa-loka profligacy has been a centuries old tradition primarily responsible for destruction of Bengal. Even now, if you condemn CPI(M) / Jyoti “Boshu” in Bengal, you run the risk of being lynched !! And if you condemn “Poribortan” Begum, only Ma Kali  can protect you !!!

Bhagavana Siva  had directed Marathas to save earth and destroy Bengal !!

On what grounds do they claim to be greatest intellectuals on earth ?
Why has Bengal always been so wayward a State ??
Is it possible to save Bengal ?
If yes, when and by whom ??