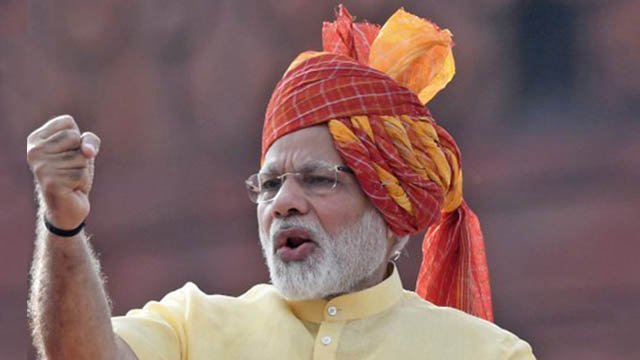 One huge nation comprising of 29 States with just one tax rate is not only Constitutionally a romantic idea but also very much practical and attainable unlike another romantic idea of Communism that turned out to be a historic ideological disaster. Enactment of GST across the nation at the stroke of mid-night of June 30 and July 1, 2017 is a historic milestone in nation’s history so much so that it almost equals in significance adoption of the Constitution of Bharata by the Constituent Assembly way back in 1947 with Dr. Rajendra Prasad in Chair steering the House. Central Government headed by Prime Minister Modi deserves a thousand plaudits for orchestrating the historic landmark epaulette to Bharata’s Constitution with an amazing finesse.

In one stroke, several financial ills afflicting the nation since 1947 viz. taxes on taxes, variations in taxes from state to state in the same country, duplication / triplication of taxes have gone into history. Not only that, massive corruption, discretionary powers of interpretation of laws, agony of voluminous paper-work, bureaucratic harassment in the name of annual assessment etc. too, are now poised to become relics of the Command-Control economy imposed upon the country by the first Prime Minister. States shall no more enjoy unmitigated liberty to impose taxes here and there at their whims and fancies in the name of State autonomy or federalism as they would be governed by one Parliamentary Act alone. Another salient feature of the law is constitution of GST Council comprising of members drawn from States and Centre. The Council would act as a tribunal thrashing out most of the contentious issues at the Council level itself. That significantly reduces burden of litigation involving tax disputes on an already overburdened Judiciary.

The Act transforms entire nation into one market wherein goods can be despatched from anywhere to anywhere, billed and sold anywhere at a uniform price without being tormented by additional tax worries. It shall generate more jobs with rise in productivity as well as facilitate raising more warehouses across the country reducing wastage. It shall also mitigate air pollution caused by thousands of stranded commercial carriers at Octroi Nakas across the country.

Thus, GST Bill is meant to improve environment by inceasing Carbon credits too. It goes a long way in boosting consumption, nurture entrepreneurial enterprises, rise in services to raise a vast chunk of population above poverty line. For employment generation, productivity must improve and GST is a powerful tool to boost productivity. GST is a potent boon for those first generation entrepreneurs who possess high level of morale with grit and determination to succeed as their only seed capital. Nationally unifying taxation law is a great socio-economic equalizer and a true measure to democratize wealth substituting ‘trickle down effect’ / ‘Rob Peter to Pay Paul’ / so-called ‘Hindu Rate of Growth’ of the much maligned Nehruvian era with ‘NaMo Rate of Growth’ defying laws of gravity with wealth ‘trickling up’ instead of down !!!!!!

As the GST law is destined to be administered through a digital GST Network alone, Govt. shall be in the know of each and every financial transaction occurring in the country. The payment system shall root out indirect tax evasion, generate enormous data for analysis and formulating better economic plans. It is poised to be a historic milestone to eradicate corruption and generation of ‘black money’ at middle and lower rungs of Governments.

As every historic move spontaneously creates a few ‘Prophets of Doom’, GST too, is no exception. There are experts critical of two tier structure of GST who have overlooked the fact, narrowing down from some 64 types of taxes amounting upto 35% on invoice value in the country to a mere four upto 28%, itself is an enormous achievement. With greater efficiency, benefits and economic integration among States, it may well pave the way to just one rate of GST in future as they have been emphasizing so far. Opposition repeatedly stressed upon one GST in several countries which even they have not been able to achieve in mere one stroke.

With precious experience gained when the current Constitution’s 122nd Amendment Bill pertaining to GST is enforced and critiques turning vociferous supporters and facilitators, the situation may very well evolve to readily assimilate One Tier, One GST in the country in years to come.

Several other countries too, have undergone GST blues before evolving into a resolute system. Now 160 countries have GST or VAT introduced in 1970s-80s. Some of them are –
Australia smoothly introduced GST in 2000 with peak rate at 10%, now proposed to be raised to 15%.
Brazil have VAT in the name of GST with levies varying from 17% in Sao Paulo to 18% in Rio de Janerio with inter-state supplies from  4% to 25%.
China introduced VAT to substitute Business Tax System and partial GST in 2016. Chinese real estate bubble was irrevocably punctured by VAT.
Canada introduced GST in 1991 with Bharata like two tiers with States enjoying freedom to opt for anyone of them.
France is the first one to introduce GST in 1954, successfully running till date.
Japan are still wallowing in Consumption Tax regime somersaulting from one figure to another.
Malaysia debated for 26 years before introducing in 2015, prospered heavily after initial hiccups.
New Zealand introduced GST @ 10% in 1986, then revised at 15% in 2010 and distortions addressed.
Singapore introduced it in 1994 successfully, now after corporate income tax, second largest source of revenue.
USA does not have GST. States are privileged to high level of autonomy in taxation.

The innovative big-bang measure is interestingly described through a video-clip circulated in whatsapp wherein benefits of remaining resolutely loyal to one’s wife have been enumerated as compared to heaps of hurdles and obstacles faced by one in multiple alliances and promiscuity with wife symbolising GST while girl-friend / live-in-partner etc., various forms of taxes.

It is an highly commendable transforming achievement registered by Modi Government amounting to big-bang reform.