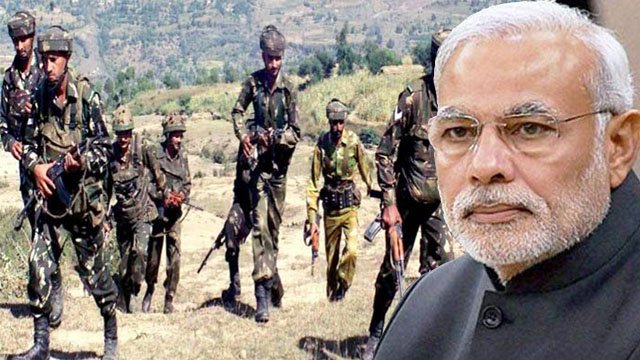 National Election Commission have demanded empowerment to prosecute those who level frivolous allegations over sanctity / authenticity of Commission’s functioning / election results. Had it been already in place, AAP CM ‘Without Portfolio’ would have deported himself responsibly, refrained from mud-slinging on anyone he can think of.

It is yet another interesting matter that he is ‘Maun’ these days following his brush with law after howling from rooftops for days together, Modi / CBI… do not / can not terrorise him !!

This empowerment is now very genuinely required by Armed Forces though they have not yet demanded on their own volition. Bharatiya Sena should be allowed / empowered to take suo moto action, court-martial anti-nationals like Sandip Dixit / Mani Aiyer / Brinda, Prakash Karats / AAP CM etc. etc. who defame them at regular intervals.

These Johnnies accuse Armed Forces of so-called atrocities, then demand proof / evidence from others to prove them wrong instead of producing evidence to prove them right !! I intensely believe, such wretched worms do not enjoy the moral right to survive in this country Mr. Prime Minister. “Gaddaron Ki Baraat” is steadily expanding as they are now desperate for survival, so they cannot be allowed to go berserk, vent out their pathological frustration upon a decorated COAS / Armed Forces.

These enemies of the nation conveniently ignore historical facts that war of independence was started by a soldier Mangal Pandey in 1857 and concluded in 1947 by the Indian National Army under the leadership of yet another soldier, Netaji Bose. Our independence was earned by Armed Forces and not by ‘Chacha’ Nehru with Edwina Mountbatten by his side or Indira Gandhi’s ‘Vaanara Sena’ of school kids !!!

Least of all by the Great ‘Chatur Bania’ with his funny ‘Chaturaai’ of Satyagraha / Ahimsa / Mulla-Bhakti / Bhajans / Bakari Ka Doodh / Multani mitti / so weird a Brahmacharya… and what not. Honour and reputation of Armed Forces are sacrosanct, inviolable and anyone attempting to tarnish that by mud-slinging deserves several years of rigorous imprisonment after Court Martial, Mr. Prime Minister.

Empowerment to defend their reputation, is a legitimate right of every Constitutional body and Government must move fast in this direction to provide them legal immunity cover from frivolous onslaughts often lobbed by proclaimed traitors espousing pseudo-patriotism. Congress was founded by a British Gora to hoodwink freedom movement and now it is headed by a Vatican sponsored Italian Gori to Christianise Bharata, loot country’s wealth and destroy Hinduism by converting all Hindus. Patriotism / nationalism was / can never be their mug of coffee.

Bidding adieu to red-beacon on top of Government vehicles was a great move and I warmly compliment you Mr. Prime Minister for that. However, just one more small action is required to make it a highly valued-added decision –

Number plate on every Government vehicle must be painted with “Servants of People of Bharata” instead of “Government of India” or “Bharata Sarkara”. It will bring about a remarkable effect on the mind-set of every occupier of such Government vehicles.