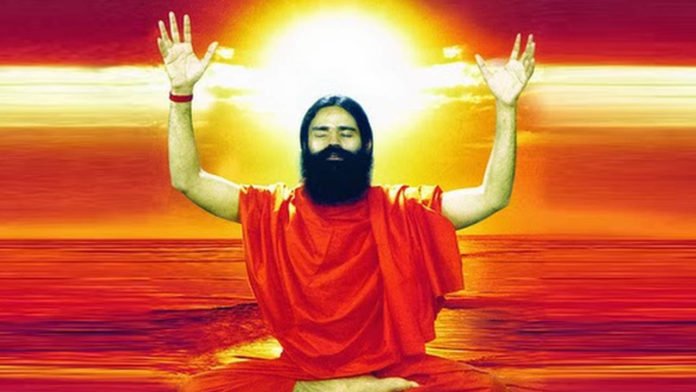 He spotted the most challenging opportunity to create an enterprise from Ground Zero amidst suffocating secularism, nauseating corruption, sickening anti-nationalism, treachery, back-stabbing of the nation, rotten & foul-smelling sycophancy, stinking dynastic politics, criminals / looters / killers / rapists ruling over the nation, utter despondence & gloom caused by diseases, moral degradation prevailing all around… he pricesly recognised Yoga  and Adhyatma  as the only answer to address those catastrophic maladies afflicting the nation. And he ventured out on a bicycle, clothed in just one piece !!!!

With respect to his entrepreneurial acumen, the saffron-clad, half-naked Swami  has left even stalwarts like Henry Ford, Sony, Honda, Jamshedji Nusserwanji Tata, Dhirubhai Ambani or Narayanmurthy far far behind himself !!

Let us examine how and why –

He has presented before the world a unique & marvellous spectacle – entire nation rising to become Swami’s Venture Capitalists !! One entrepreneur and lakhs of venture-capitalists falling over each other to invest !!! Something unbelievable and inconceivable. I believe it only because I happen to be an eye-witness to it belonging to his generation, like crores of others in the country.

Pace of growth of the Swami’s enterprise has been exceedingly high, like a wild forest-fire conflageration !!

Swami’s Debt / Equity Ratio is heavily tilted in his favour. Any national / international banker would fall head over heals to extend him credit facilities !! They would hold themselves fortunate to be associated with him as his banker.

With almost Zero Current Liability, even world renowned audit firm Lovelock & Lewis would not be able to compute Swami’s Current Ratio correctly !! He will drive any Chartered Accountant crazy, out of his wits !!

Swami’s Reserves & Surpluses are as deep as the Pacific Ocean, growing deeper and deeper by the day !! There is no known precedent to match the reality in that manner.

Swami’s enterprise started from the Break-Even Point itself !!! Even so-called dons of Harvard Business School shall not be able to explain this unique phenomenon !!

Swami’s Cash-Flow Statement is any businessman’s delight !! The flow is incessant. That too, without any leakage at all, anywhere !!

Swami’s Retail Management skill is stupendous !! Retail Management don of Harvard Business School, late Prof. Thomas Lewitt must be turning in his grave on being belittled by the saffron-clad / half-naked Swami  on his retail expertise !!

The Swami  engineers 100% redeployment of profits, with no dividend payout at all !! Even then, investments are pouring in incessantly !! A divine miracle, indeed.

His enterprise is the best known venture in the services / hospitality sector in the world. Undoubtedly.

Client / Customer satisfaction rate is almost 100%. He has raised the bar for all others to emulate and match which is a great challenge for anyone to accomplish.

Swami’s services are infinitely value-added in favour of his clients / customers, because he saves human lives by curing so-called ‘incurable diseases’.

Swami’s market segmentation is precise to the core. All his marketing Ps (and Zs too !!!) are just superb and formidably accurate.

Swami’s BRAND-EQUITY must be in the order of some Rs. 1,00,000 Crores !! Rs. 50,000 Crores was reported by the Economic Times some 10 years ago after extensive calculations / surveys. He has notched many more miles and milestones after that.

The Swami  is a hallmark of BRAND-IDENTITY, absolutely a brand new term. After his advent not only Brand-Loyalty has been substituted by Brand-Identity, but also definition of Brand-Loyalty is overdue for extensive revision because the brand he created i.e. Patanjali, is always over-shadowed by his own personal brand !!

The Swami  has thoroughly exposed malevolence of The Theory of Profit-Centre Concept. He has trashed it for the better, in the interest of human civilisation and culture.

This Swami  has successfully challenged so many cartels and shibboleths viz. Allopathy, chemical fertilizers / pesticides…even 5-Star Deluxe Ayurveda  too !! They all hitherto, appeared to be invincible, beyond all powers of the world and now scampering around searching for newer strategies / ideas to battle him out in the Kuruksetra  of Adhyatmika  Business !!!

Swami’s employment cost is moderate to humble as he commands tremendous devotion & dedication to the Mission Statement among employees of the enterprise.

The Swami  maintains high stock-turnover. His stocks are highly liquid, as good as crisp currency notes !!

This Swami’s Market Capitalisation is likely to surpass even that of Tata Consultancy Services, Infosys or any other corporate entity in the world if compared on equal measures, if corporatised and listed on a prominent stock-exchange of the world.

In spite of so formidable financial fundamentals, the Swami  maintains a very modest return on investment. It speaks a voluminous treatise on the Swami’s foresightedness and vision. No business strategy has ever been so aggressive in the recorded history of human civilisation.

Brand Recall Rate that the Swami  commands, is enough to incinerate into ashes even the best known brand owner in flames of jealousy, anywhere in the world !!!

The Swami  has consecrated so many new international benchmarks to boot after demolishing age-old ‘sacrosanct’ ones appearing invincible hitherto.

The Swami’s SWOT Analysis is entirely loaded in favour of Strengths and Opportunities while slots of Weaknesses & Threats are almost blank !!! It is truly unique, to say the least.

Value Chain that the Swami  has developed poses a great intellectual exercise for the Michigan University’s Don, late CK Prahlad. He should have better learned Value-Chain Management from the semi-clad / semi-naked saffronised Swami  who converted an ordinary, staple vegetable like ‘Lauki’ into a precious gem !!

This Swami’s  asset management efficiency may be matched only by the Ambanis and no one else.

The Swami’s Market Share has been rising consistently, commands lion’s share in the segment of Ayurvedic  medicines. Soon, market leaders may be left far behind due to this onslaught while beckoning all of them to come up and lead !!!

The Swami  is just superb in Corporate Social Responsibility. CSR of providing free training in Yoga  to millions happens to constitute his core competence too and that is quite a unique spectacle, indeed.

Swami’s human resource development is strategically well-placed and unprecedented on such a massive scale that it has never ever been known / beheld before. His HRD ‘Mantra’ of ‘Pranayama’ & ‘Yoga’ are time-tested, incomparable, unrivalled, eternal and unbeatable.

The Swami’s Power Presentations on Astha and  Samskara  Channel are the most powerful presentations in the world ever carried out by anyone. He is the sole cause behind the massive TRP rankings of those Channels.

The Swami  is completely target / goal oriented. He is a live-wire example of ‘Management By Mission / Objectives’.

The Swami  advocates value / moral based Co-Opetition instead of brute, jungle like competition / profiteering. He is totally generous towards all niche players as well as laggards.

The Swami’s Mission-Mantra. Well, I am too humble a man to comment upon that authentically.

Even British Queen bowed before the Swami  by squatting and taking a few shots of ‘Kapala-Bhati’ and ‘Anuloma-Viloma’. He has created a series of highly valued sub-brands – Bhasrika, Kapala-Bhati, Anuloma-Viloma, Ujjayi….need I go further ??

The Swami  has wonderfully resolved the perpetual conflict between two ‘Devi-s’ viz. Laxmi  and Saraswati  !! His declaration that Ma Laxmi  shall have to be with those who are blessed by Ma Saraswati, is an epoch making event for Hindu-s.

The Swami  is a very great epitome of communal harmony, patriotic nationalism and commitment to values of a very high order.

This Swami  is the greatest unifier of the fractious, disparate Bharatiya  society. He is exceedingly busy in inspiring all Bharatiya-s to transcend all classes, creeds, faiths, sects etc. He is also removing all ancient dusty cobwebs of history viz. Savarna  vs. Dalit, Hindu  vs. Muslim etc. through Yoga.

Picking up misplaced threads of the wisdom of Svadharma-Karma Yoga  enshrined in Srimadbhagvadgita, this unique Swami  has practically demonstrated before the world most resoundingly – You alone are the Master of your own destiny and no one else. You alone are your own best friend as well as your own worst enemy.

Swami’s assertion that all Yoga  techniques would be patented so that nobody is able to claim royalty on that, displays his Himalayana  greatness. When he declared, Yoga  is meant for the entire humanity free of cost / royalty, he acted like a divine-incarnate himself.

This Swami  has extended a golden opportunity to the Nobel Peace Prize Committee to dry-clean their soiled / tarnished Carbon-Black reputation by conferring upon him the Peace Prize. They have been awarding the Prize to all dubious personalities hitherto. I hope, wisdom would prevail upon them ultimately, for a refreshing change. Well, if it is ‘Bharata-Ratna’, the award shall be honoured if conferred upon him only if he agrees to accept that honour !!

To cap it all, this Swami  has defied all principles of Astrology too. He does not have a fate-line at all, on his right palm !! By his own confession !!! Indeed.

If this Swami  succeeds in his mission of ‘Bharata Swabhimana’, he would create history by re-enacting all-time great Swami Vivekananda  and Adi Samkaracarya  in 21st century of Bharatvarsa. Over six billion strong humanity all over the world may be on the verge of witnessing a very very unique, unusual and extra-ordinary revolution of sorts, unprecedented in known / recorded history so far.

He is a vociferous champion of ‘Vande Matarama’ too.

This nation enjoys divine protection, being the home of Isvara’s own Dharma  i.e. Sanatana Vedanta. All other faiths / sects / religions are derivatives / adulterated / contaminated versions of Sanatana Vedanta Darsana. Great Souls continue descending on this holy Hindu-land of Bharatvarsa to consolidate roots of Dharma. It is a permanent land of Swami-s, Sadhu-s, Sannyasi-s, Yogi-s, Rsi-s and Maharsi-s.

Now it stands established, Yoga-Sakti  may perch you anywhere. He has left behind dozens of doyans of business leaders without being in the business of business at all !!!
May he live for thousands of years and clone himself as many times as possible, innumerably, in the service of this nation and Dharma.