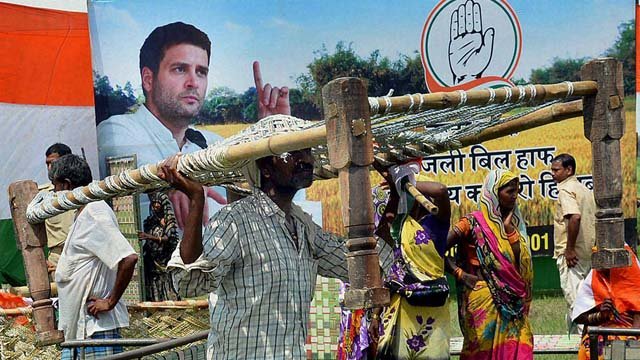 MP in last 10 years has shown almost 20% Growth in agriculture and has emerged as the top ranking Agricultural state even beating Punjab. This could not have happened without the Government’s support in terms of uninterrupted power supply, linking of rivers, bringing more area under irrigation, development of ware houses, crop insurance, easy bank loans.

Otherwise some one should tell me as to how 20% growth has taken place in last 10 years when the agriculture growth all over India had shrunk by 2% during the previous Govt’s regime.

The problem in MP is probably not due to shortages but due to the surprluses/ Plenty. So, to apply the same formula or template and perceive that farming in MP is like that of UP and Bihar is not going to work.

I think, Cong has once again got it wrong. Although it did try to fish in troubled waters but it is doing it with the wrong FISHING ROD and using the wrong bait.

Secondly, as it did in UP, almost 6 months prior to elections Rahul went around the rural areas and organised KHAAT MEETINGS of farmers (who used to run away with the Cots), In MP also he has orchestrated the Violence prematurely, because elections in MP are still a year away.

So, on both counts he is knocking at wrong door and has exposed his party.

Not only that he has invited the wrath of people living in cities who are deeply distressed with the way his Partymen orchestrated violence on HIGHWAYS.